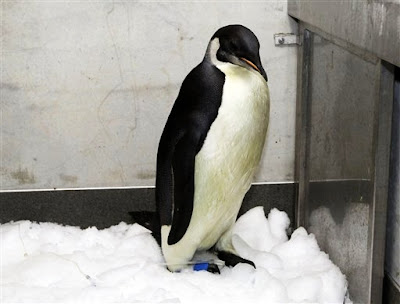 Okay, this is a heart-warming story of New Zealand's famous emperor penguin, "Happy Feet", but it does raise some interesting questions of man's interference in animal kingdom scenarios as well as human activities. There is a long history of man saving whales, porpoises, elephants, lions, etc. But why? Shouldn't nature take its course...survival of the fittest philosophy. Maybe man should remain only an observer. I remember a specific case in an anthropology course involving a group of researchers studying the feared Jivaro Indians of South America. The researchers accompanied the Jivaro Indians on a raid on a rival tribe. Savagery was the rule of the day and one researcher witnessed the partial decapitation of a native woman. She was still alive and he could have easily dispatched her pain and suffering with one shot from his pistol. But he knew better and allowed the drama to reach its own conclusion. Now animals are different and mostly carry the "cuteness" factor. We are somehow drawn to rescue wild animals [as well as domestic]. Maybe this was the case with "Happy Feet"; maybe the players knew that world attention would be drawn to the Wellington Zoo...good public relations? And this little guy was brought back to health to the tune of $75,000 to be released and allowed to face the elements and hungry predators. Maybe that money could have been spent better in other areas. And suppose, when he is released, that he discovers hunting for himself is difficult and has fond memories of "fish milkshakes". "Happy Feet" beats feet back to New Zealand.

New Zealand's most famous penguin "Happy Feet" in his ice-lined, air conditioned room at Wellington Zoo's hospital. Fattened up on a diet of "fish milkshakes" and escorted by his own personal veterinary team, Happy Feet sets sail on August 29 for the icy waters he calls home. The penguin washed up on a beach just outside Wellington in mid-June, more than 3,000 kilometres from the Antarctic.

Fattened up on a diet of "fish milkshakes" and escorted by his own personal veterinary team, the world's most famous penguin, Happy Feet, sets sail Monday for the icy waters he calls home.

The emperor penguin washed up on a beach just outside the New Zealand capital Wellington in mid-June -- weak, emaciated and more than 3,000 kilometres (1,900 miles) from the Antarctic colony where he hatched about three-and-a-half years ago.

The wayward bird's unexpected appearance stunned wildlife experts, who said he was only the second emperor ever recorded in New Zealand, and captivated the public, which closely followed every turn in his struggle for survival.

"The level of interest has been incredible, not just in Wellington or New Zealand, but around the world," Wellington Zoo's veterinary manager Lisa Argilla said.

"Everyone's been really curious to see what happens."

Initially, vets hoped the giant penguin would swim back to the Southern Ocean of his own accord, but when he became ill after eating sand and sticks in a bid to cool down, it was obvious he would die without human intervention.

Happy Feet, named after a smash-hit 2006 animated feature about a tap-dancing emperor chick, was rushed to Wellington Zoo's animal hospital, where a top human surgeon performed an endoscopy to clear his gut.

He was housed in an air-conditioned room with a regularly replenished bed of ice to simulate Antarctic conditions and responded positively to a diet of fish milkshakes consisting of pulverised salmon fillets.

"It was touch-and-go there for a while but he's doing really well now," Argilla said.

Happy Feet has become a wildlife celebrity during his two-month rehabilitation, attracting global media interest and inspiring plans for a book and documentary recounting his story.

New Zealand Prime Minister John Key set aside matters of state momentarily to wish the penguin well, while actor Stephen Fry, in Wellington to film "The Hobbit", visited him in his sub-zero living quarters.

Attendances at Wellington Zoo have almost doubled, even though Happy Feet has not been on public display.

"It's put our little zoo on the map, which has been exciting," Argilla said.

The VIP treatment will continue Monday, when Happy Feet is loaded onto the New Zealand research ship Tangaroa in a custom-made insulated crate to hitch a ride to the Southern Ocean.

With Argilla and two assistants on hand to ensure smooth passage, he will be released into the notoriously rough seas after a four-day voyage.

"He won't mind about 10-metre (33-foot) swells, this guy's used to harsh conditions, he'll probably be pretty excited actually and just dive away and that'll be the last we see of him," Argilla said.

"He'll hopefully bump into some penguins that he recognises, fingers crossed. Otherwise, he'll just go and probably establish himself in another colony."

The area where Happy Feet will be set free is still 2,000 kilometres from Antarctica but Argilla said it was within the normal feeding range of emperor penguins and his chances of survival were good.

"We're pretty hopeful," she said. "He just needs to deal with being an emperor penguin out in the wild and survive the predators.

"The wild is a harsh, cruel environment and obviously there are risks, but we're giving him the chance to live out his normal life cycle."

For those suffering Happy Feet-withdrawal, the bird wil be fitted with a GPS tracker so researchers and the public can monitor his progress in the wild at http://www.wellingtonzoo.com .

Despite the feel-good factor surrounding Happy Feet, there have been grumblings about the estimated NZ$90,000 ($75,500) spent saving the bird, with critics saying he should have been euthanised or left on the beach to die.

"We're letting ourselves get carried away with emotions," Wayne Linklater, a biologist at Wellington's Victoria University, told the Dominion Post newspaper, arguing the resources would have been better spent elsewhere.

"He's been invaluable," she said, citing increased interest in her programme from schoolchildren and volunteers.

"It's been quite an ordeal for a penguin to go through and now that he's come out the end of that it's made a nice, happy story.

"There's a lot of doom and gloom around the place and it's good to have something to use as an icon for conservation in New Zealand... I think the ultimate happy ending would be for Happy Feet to end up back in Antarctica with his colony."