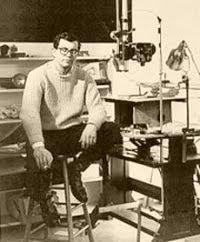 Robert Breer, an animator whose use of novel techniques to set lines and forms scrambling across the screen opened up a new language for film, died on Aug. 11 at his home in Tucson. He was 84.

His death was confirmed by his wife, Kate Flax.

Mr. Breer, a painter by training, turned to animation after making flip books and stop-action films based on the abstract paintings he produced while living and exhibiting in Paris in the 1950s.

Early on, he saw the potential for breaking with the narrative sequences and anthropomorphic forms that defined the medium.

In films like “Recreation” (1956), “A Man and His Dog Out for Air,” (1957), “69” (1968) and “Swiss Army Knife With Rats and Pigeons” (1980), viewers were bombarded with wiggling lines, letters, abstract shapes and live-action images that jumped and flashed, zoomed and receded, appeared and disappeared, inflicting what Mr. Breer once called “assault and battery on the retina.”

“He was a seminal figure in the new American cinema and the American avant-garde beginning in the 1950s and continuing right up to the present,” said Andrew Lampert, a filmmaker and archivist at the Anthology Film Archives in Manhattan. “He was a real pioneer in animation and short-form filmmaking.”

Robert Carlton Breer was born on Sept. 30, 1926, in Detroit. His father, Carl, was an automotive engineer who designed the Chrysler Airflow and, in his spare time, invented a 3-D camera to film family vacations.

Mr. Breer attended Stanford, where he started out as an engineering student but soon turned to art, producing figurative work but undergoing a conversion to abstraction after seeing paintings by Mondrian on a school trip. After earning a bachelor’s degree in 1949, he sailed to France.

In Paris he turned out large geometric abstract paintings, which he exhibited at the Denise René Gallery. One of his flip books and several of his films were included in the gallery’s influential 1955 exhibition “Le Mouvement,” which put kinetic art on the map by showcasing the motion-conscious work of artists like Jean Tinguely, Marcel Duchamp, Alexander Calder and Victor Vasarely.

Determined to introduce motion into painting, Mr. Breer had already begun making stop-action films, titled “Form Phases,” based on motifs from his paintings. He quickly began developing an idiosyncratic store of images in short animated films whose geometric forms and absurdist tendencies reflected his debt to Dadaism and Russian Constructivism.

In “Un Miracle” (1954), a short film that anticipates Terry Gilliam’s work for “Monty Python’s Flying Circus,” the pope appears on a balcony and begins juggling balls. Suddenly his head falls off, and he juggles that too.

In a 1971 interview with Jonas Mekas, Mr. Breer said, “In all my work I tried to amaze myself with something, and the only way you can amaze yourself is to create a situation in which an accident can happen.”

On returning to the United States in 1959, he encountered filmmakers like Stan Brakhage, Kenneth Anger and Mr. Mekas, who were developing a new avant-garde American cinema along lines congenial to his own. He also began collaborating with Pop artists like Claes Oldenburg, with whom he made the film “Pat’s Birthday” (1962), and the leading figures involved in happenings, multimedia art and performance art.

Billy Kluver, the Bell Labs scientist who was a founder of the organization Experiments in Art and Technology to bring engineers and artists together, invited Mr. Breer to contribute work for the Pepsi Pavilion at the world’s fair in Osaka, Japan, in 1970. Mr. Breer fashioned large dome-shaped versions of the motorized sculptures he called floats, which moved slowly and randomly.

Mr. Breer, who inscribed his images on 4-by-6-inch index cards, devoted considerable ingenuity to undermining traditional narrative structures and speeding up the delivery of images to the viewer’s eye. Rather than having one frame flow to the next, creating a seamless continuity, he made each frame as different as possible from the one that preceded it. A devotee of early cinema technology, he used rotoscopy, a technique devised by Max Fleischer for animating live-action scenes, in “Fuji” (1974), a quasitravelogue based on his experiences in Japan in 1970.

He taught film at Cooper Union in Manhattan for 30 years, beginning in 1971.

His first marriage ended in divorce. In addition to his wife, Kate, he is survived by five daughters, Sophie, of Minneapolis; Julia, of Closter, N.J.; Emily, of Garrison, N.Y.; Sabelle, of Palisades, N.Y.; and Sally, of Los Angeles; a brother, William, of Bloomfield Hills, Mich.; and three grandchildren.