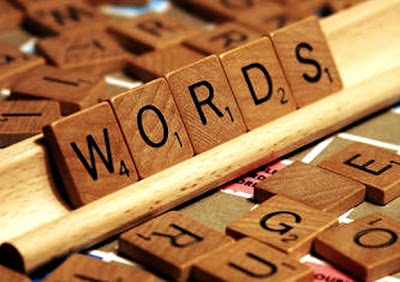 1. To foreshadow vaguely, intimate.
2. To suggest, disclose, or outline partially.
3. To overshadow, obscure.

1. Coming from another source and not inherent or innate.
2. Arising or occurring sporadically or in other than the usual location.

1. Unfading, everlasting.
2. Of or like the amaranth flower.
3. Of purplish-red color.

1. The smallest amount or distance.
2. The lowest throw at dice, the double ace (two ones.)
3. Bad luck, misfortune.

Syntactical inconsistency or incoherence within a sentence; especially : a shift in an unfinished sentence from one syntactic construction to another.

1. Difficulty determining the truth of an idea due to equally valid arguments for and against it.
2. In rhetoric, the expression of a simulated or real doubt, as about where to begin or what to do or say.

A sudden breaking off of a thought in mid sentence, as though the speaker were unwilling or unable to continue.

1. Characterized by an ornate style of writing or speaking.
2. Golden or gilded.
3. Brilliant; splendid.

1. Authorized; recognized; accepted.
2. Included in the canon of the Bible.
3. In mathematics, (of an equation, coordinate, etc.) in simplest or standard form.

1a. To haggle, exchange, barter.
1b. To bargain for.
2. British: to exchange small talk, chatter.

1. A throwing of a person or thing out of a window.
2. An usually swift dismissal or expulsion (as from a political party or office).

1. To go about usually ostentatiously or indiscreetly with members of the opposite sex.
2. To travel, roam, or move about for pleasure.

Lacking intelligence and vitality, having no common sense or initiative; dull.

1. First encounter with or use of something taken as a token of what will follow.
2. A gift or token for good luck or as an expression of good wishes.
3. A first installment of payment.

1. Sacred, characterizing or used by priests.
2. Having to do with a simplified form of hieroglyphics.
3. Highly formal in style, adhering tightly to the standards of a style.

1. August 1st originally celebrated in England as a harvest festival -- called also Lammas Day.
2. The time of the year around Lammas Day.

1. Of or pertaining to divination.
2. Having the power of divination.

An expert or connoisseur; someone with profound knowledge of a subject.

Characterized by the singing of several notes to one syllable of text, for emotional impact, as in blues and other musical styles.

To purge or purify.

A small and often intricately carved toggle (as of wood, ivory, or metal) used to fasten a small container to a kimono sash.

1. Named, having a name.
2. Having a name attached or associated; not anonymous, as an onymous letter to the editor.

1. An ornamental tuft (as of feathers) especially on a helmet.
2. Dash or flamboyance in style and action : verve.

1. A regional version of a language differing from its standard, literary form.
2. Arural or provincial form of speech.
3. Any jargon or private form of speech.

Of or relating to land or its products.

1. Having some secret or mysterious meaning.
2. Consisting of or set down in runes.
3. Referring to an interlaced form seen on ancient monuments, metalwork, etc., of the northern European peoples.

1. Of keen and farsighted penetration and judgment, discerning.
2. Caused by or indicating acute discernment.

Diligent, assiduous, zealous; applying oneself unflaggingly to a task.

1. Of the body, bodily, physical.
2. In anatomy, zoology, pertaining to the body wall of an animal.
3. In cell biology. pertaining to or affecting the somatic cells, as distinguished from the germ cells.

The right to use the property of another as long as it isn't damaged.

1. Prediction.
2. The act of prophesying.

A situation in which a player is limited to moves that have a damaging effect.


Footnote...some words will go away.

Aerodrome and charabanc are among the words presumed to have become extinct in the past year, according to lexicographers.

Collins Dictionary experts have compiled a list of words which have fallen out of use by tracking how often they appear.

Other words on the list include "wittol"– a man who tolerates his wife's infidelity, which has not been much used since the 1940s.

The terms "drysalter", a dealer in certain chemical products and foods, and "alienism", the study and treatment of mental illness, have also faded from use.

Some of the vanished words are old-fashioned modes of transport such as the "cyclogiro", a type of aircraft propelled by rotating blades, and charabanc, a motor coach.

The "stauroscope", an optical instrument for studying the crystal structure of minerals under polarized light, is also no longer used.

Dr Ruth O'Donovan, asset development manager at Collins Language Division in Glasgow, said: "We track words using a very large database of language which is a very large collection of various texts from spoken and written language, including books, newspapers and magazines so we can track language change over time.

"We track new words but we can also track for the frequency of existing words and when they get below a certain threshold we see them as being obsolete, though they may be used in very specialist circumstances.

"Such words are in our largest dictionary but we've categorised them as obsolete, as although they go out of general use they are still of interest to historians so it's useful to have them in the dictionary. But we would exclude them from our smaller dictionaries."

Other words which have passed out of use include 'supererogate' which means to do or perform more than is required.

While 'succedaneum', meaning something used as a substitute also no longer trips off the modern tongue.

Neither does 'woolfell'. the skin of a sheep or similar animal with the fleece still attached.

The dictionary experts have also identified a word still commonly used in the 21st century, though its meaning has changed.

While 'fun fur' now means synthetic fur, up until the 1960s it meant cheap fur from animals such as rabbit, which was often dyed various colours.

The data was discovered as part of research for the publication of the next Collins English Dictionary in October this year.

Email ThisBlogThis!Share to TwitterShare to FacebookShare to Pinterest
Labels: vocabulary