Cry for an old form of communication or to generate revenue? 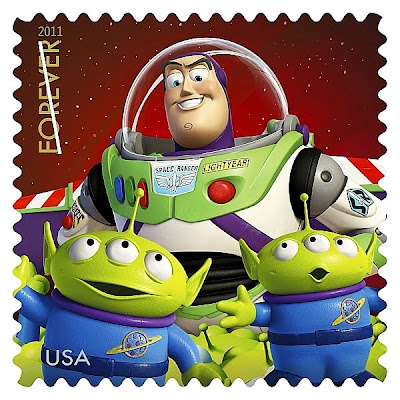 "Revenue", I would bet. The U. S. Postal Service is in deep trouble and they will try anything. Think about it...when was the last time you received a genuine, hand-written first class letter? Been a while, hasn't it.

The U.S. Postal Service invites you take a moment and send a handwritten note to a friend, loved one, co-worker, dog sitter or whomever else comes to mind. Then, it would like you to stamp that letter -- ideally using one of the new series of Disney/Pixar-themed stamps unveiled this afternoon -- and drop it into your nearest mailbox.

The Postal Service unveiled a new "Send a Hello Forever" series of stamps featuring characters from Disney / Pixar Animation Studios including: Buzz Lightyear from "Toy Story"; Lightning McQueen from "Cars"; Remy the rat from "Ratatouille"; "Wall-E"; and Carl and Dug from "Up." The stamps are on sale today in post offices nationwide, and online at usps.com .

The new stamps are coupled with a campaign to encourage letter-writing:

“With this new stamp pane, the U.S. Postal Service is very proud to honor the art of Pixar’s talented team of animators, and at the same time, help our customers communicate the way they care, through the power of the U.S. Mail,” Deputy Postmaster General Ronald Stroman said in a statement.

He was in Anaheim today at the D23 Expo to announce the debut.

He added: “Taking the time to slow down and send a hello through the mail is a simple and special gift to both the sender and the recipient.”

The Postal Service is struggling, and it is studying thousands of postal outlets nationwide for possible closure. The reasons are simple. Fewer people than ever before are using the the post office services.

The "Send a Hello Forever" stamps are an extension of the "Art of Disney" stamp series started in 2004. Originally, it was limited to three stamps. But the series proved so popular -- some are among the best-selling stamps of all time -- they have been continued.

In fact, the stamps are big money makers. Many people never put the stamps into circulation; they're purchased by fans and collectors.