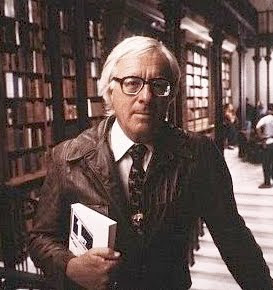 It's the birthday of science fiction writer Ray Bradbury, born in Waukegan, Illinois (1920). He's the author of many books of science fiction, including The Martian Chronicles (1950) and Fahrenheit 451 (1953). One of his ancestors, Mary Bradbury, was burned as a witch in Salem, Massachusetts, and he said he got from her his anxiety about fearmongering and thought control. He said, "Science fiction is a wonderful hammer; I intend to use it when and if necessary, to bark a few shins or knock a few heads, in order to make people leave people alone." He told Paris Review, "I prefer to see myself as the Janus, the two-faced god who is half Pollyanna and half Cassandra, warning of the future and perhaps living too much in the past — a combination of both." He didn't go to college, because the family couldn't afford it, but he did go to libraries ... at least three times a week for 10 years. He wrote Fahrenheit 451 on a rented typewriter in the basement of UCLA's Powell Library.

As a boy, he read Edgar Allan Poe and The Wizard of Oz. And when he was 12, a traveling carnival came to town, and he met a magician named Mr. Electrico, who believed young Ray was the reincarnation of a friend who had died in his arms in World War I. Later, at the show, Mr. Electrico touched people in the front row with his electrically charged sword, making their hair stand on end. "When he came to me, he touched me on the brow, and on the nose, and on the chin, and he said to me, in a whisper, 'Live forever.' And I decided to."

Soooooo, you want to be a writer...a science fiction writer?

Ray Bradbury:Story of a Writer