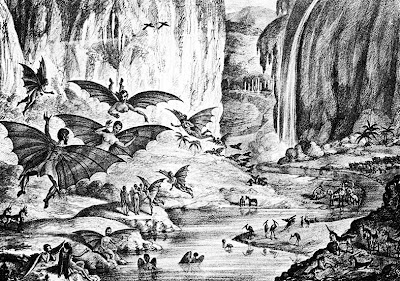 People will believe just about anything when a scientist celebrity is involved...and no this has nothing to do with Moon rocks and the Apollo astronauts.

On this date in 1835, the New York Sun ran the first of six articles claiming there was civilization on the Moon. Known as "The Great Moon Hoax," the articles were said to have been reprinted from the Edinburgh Journal of Science, and their author, Dr. Andrew Grant, claimed to be a colleague of Sir John Herschel, the most famous astronomer of the day. Grant reported that Herschel — who was setting up a powerful new telescope in Cape Town, South Africa — had witnessed fantastic creatures like unicorns, two-legged beavers, and bat-human hybrids; he also reported huge caves full of amethysts, jewel-encrusted temples, and lush jungle vegetation.

The articles were intended to be a satire of speculation on extraterrestrial life, but people believed they were true, and the increase in the "penny press" paper's circulation that resulted was a welcome side benefit. A team of Yale scientists even traveled to New York to track down the original Edinburgh Journal articles; unfortunately for them, the Journal had ceased publication several years earlier. When the New York Sun admitted that the articles had been a hoax, the public greeted the news with good humor, and sales of the paper remained vigorous.