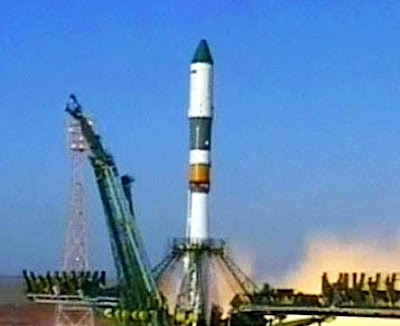 In this image from Rossiya 24 television channel, a Soyuz rocket booster carrying the Progress supply ship is launched from the Baikonur cosmodrome in Kazakhstan, Wednesday. The spacecraft, which was bound for the International Space Station, failed to reach its planned orbit Wednesday, and pieces of it fell in Siberia amid a thunderous explosion, officials said.

It still may be a good idea to scrap the ISS earlier.

"Russian spacecraft falls from the sky. Is the International Space Station in trouble?"

The second embarrassing loss of a Russian space vehicle in a week spells trouble for Russia's space program and its ability to maintain the International Space Station.

An unmanned Russian space freighter, which was launched on a resupply mission to the International Space Station, careened out of control and blew up in a "thunderous fireball" over Siberia Wednesday.

The blast triggering a state of emergency over a wide region and calls into doubt Russia's ability to handle its space obligations in the post-space shuttle era.

"The explosion was so strong that for 100 kilometers glass almost flew out of the windows," Alexander Borisov, an official in the remote and mountainous Altai Republic, on the Mongolian border, where most of the debris from the destroyed Progress spaceship rained down, was quoted by RIA-Novosti as saying.

Russian media reported Thursday that none of the wreckage fell on populated areas, and 40 lumberjacks who'd been working in the affected zone were all safe and accounted for.

But the main casualty may be Russia's ambitious space program, which is the only link to the ISS since last month's final space shuttle mission left NASA without a spacefaring capability.

The loss of the Progress freighter, which was carrying three tons of food, fuel, and water to the ISS, is the second embarrassing loss of a Russian space vehicle in barely a week, and the third so far this year. Last week, an Express AM-4 telecommunications satellite failed to separate from its Proton-M carrier rocket, and had to be jettisoned.

All of the mishaps apparently involved the Proton-M rocket, the workhorse of Russia's space program, which is used to launch most satellite packages as well as the Progress robot freighters and the Soyuz manned space vehicles.

The good news is that the six astronauts currently aboard the ISS, orbiting some 250 miles above the Earth, apparently have "fat reserves" of food and water after being visited by the space shuttle Atlantis on its last voyage in July.

"We're in a good position logistically to withstand this loss of supplies," Mike Suffredini, manager of the space station program at the Johnson Space Center in Houston, was quoted by news agencies as saying. "And in fact, I would tell you we can go several months without a resupply vehicle if that becomes necessary."

The bad news is that they may be stranded, at least for some time. Three of the ISS crew members were slated to be replaced by a Soyuz mission in late September.

But Russian space officials say they will probably ground all Progress and Soyuz spaceships until the fault can be analyzed and corrected.

"The scheduled launches of the [Soyuz] rockets are likely to be suspended because of the space freighter accident until the reasons [for the accident] are established," an unnamed Russian space official was quoted by RIA-Novosti as saying Thursday.

Four Russian flights to the ISS, two of them manned, had been scheduled for later this year. After retiring its last space shuttle, the US space agency NASA agreed to pay its Russian counterpart, Roskosmos, more than $1 billion for resupply missions to the ISS over the next four years.

Russian space experts argue that the problems, while serious, are not necessarily crippling. They insist that Wednesday's Progress crash was the first such failure in the 130 launches that have taken place since the robot freighters entered service in 1972.

They also point to recent key successes for Russia's space program, such as last month's launch of RadioAstron, a Russian space telescope that will deliver images of distant cosmic objects with 10,000 times the resolution of the Hubble Space Telescope.