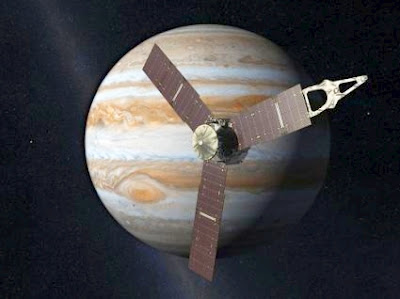 BBC NEWS
A $1.1bn (£0.7bn) unmanned space mission has launched from Florida on a journey to the planet Jupiter.

The Juno spacecraft will cruise beyond Mars to put itself in orbit around the gas giant in 2016.

It is the first solar-powered mission to venture this far from the Sun.

The mission launched atop an Atlas 5 rocket from the Cape Canaveral Air Force Station on Friday at 12:25 local time (16:25 GMT; 17:25 BST), after a brief delay caused by a helium leak.

There were concerns with the helium charging system on the rocket's Centaur upper stage, but a small leak on the "ground side" of the rocket was found to be the culprit.

"Today, with the launch of the Juno spacecraft, NASA began a journey to yet another new frontier," said Nasa's administrator Charles Bolden.

"The future of exploration includes cutting-edge science like this to help us better understand our Solar System and an ever-increasing array of challenging destinations."
Pushing boundaries

At Jupiter, where the intensity of sunlight is only 1/25th of that at Earth, space missions would normally resort to a plutonium battery.

But Juno will instead travel with three wings coated with 18,000 solar cells.

"As a solar-panelled mission, we have to keep those solar panels facing the Sun and we never go into Jupiter's shadow," the mission's chief scientist Scott Bolton told BBC News.

"Those are things we can do and still accomplish our science; it doesn't hurt us. But it would have been easier if we could have pointed just any way we wanted. We've had to develop [a strategy], and in fact we've advanced solar cell technology in doing so."

Juno's mission is to probe the secrets of the Solar System by explaining the origin and evolution of its biggest planet.

The spacecraft's remote sensing instruments will look down into the giant through the many layers and measure their composition, temperature, motion and other properties.

This should yield some remarkable new insights into the coloured bands that wrap around the planet, and a new perspective on the famous Great Red Spot - the colossal storm that has raged on Jupiter for hundreds of years.

Scientists also want to measure the abundance of water in the atmosphere - an indicator of how much oxygen was present in Jupiter's region of the Solar System when it formed.

The probe will also try to settle old arguments over whether the planet hosts a rocky core or whether its gases go all the way down to the centre in an ever more compressed state.

And it will look for the deep swirling sea of liquid metallic hydrogen that many suspect is the driver behind Jupiter's strong magnetic field.

Juno is the second in Nasa's so called New Frontiers class missions. The first, New Horizons, was launched towards dwarf planet Pluto in 2006 and should arrive at its target in 2015.

Juno ready to launch...off to Jupiter

Juno spacecraft to carry three LEGO figurines
Posted by Mercury at 9:54 AM