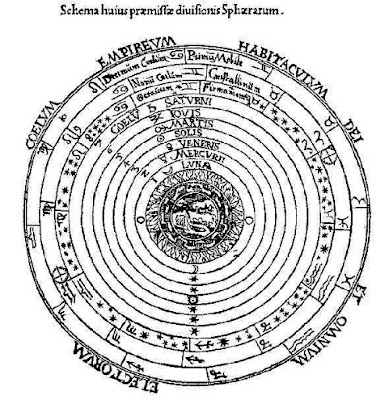 You are not alone "Flat Earthers"..."Geocentrism" is crouching in the shadows.

They say Earth is the center of the universe, embracing church teachings of four centuries ago.

Some people believe the world revolves around them — and their belief is born not of selfishness but of faith.

A few conservative Roman Catholics are pointing to a dozen Bible verses and the church's original teachings as proof that Earth is the center of the universe, the view that was at the heart of the church's clash with Galileo Galilei four centuries ago.

The relatively obscure movement has gained a following among those who find comfort in knowing there are still staunch defenders of early church doctrine.

"This subject is, as far as I can see, an embarrassment to the modern church because the world more or less looks upon geocentrism, or someone who believes it, in the same boat as the flat Earth," said James Phillips of Cicero, Ill.

Phillips attends Our Lady Immaculate Catholic Church in Oak Park, Ill., a parish run by the Society of St. Pius X, which rejects most of the modernizing reforms made by the Vatican II council from 1962 to 1965.

But by challenging modern science, proponents of a geocentric universe are challenging the very church they seek to serve and protect.

"I have no idea who these people are," said Brother Guy Consolmagno, curator of meteorites and spokesman for the Vatican Observatory. "Are they sincere, or is this a clever bit of theater?"

Those promoting geocentrism argue that heliocentrism, or the centuries-old consensus among scientists that Earth revolves around the sun, is a conspiracy to squelch the church's influence.

"Heliocentrism becomes dangerous if it is being propped up as the true system when, in fact, it is a false system," said Robert Sungenis, leader of a budding movement to get scientists to reconsider. "False information leads to false ideas, and false ideas lead to illicit and immoral actions — thus the state of the world today.… Prior to Galileo, the church was in full command of the world, and governments and academia were subservient to her."

Sungenis is no Don Quixote. Hundreds of curiosity seekers, skeptics and supporters attended a conference last fall titled "Galileo Was Wrong. The Church Was Right" near the University of Notre Dame campus in South Bend, Ind.

Astrophysicists at Notre Dame didn't appreciate the group hitching its wagon to America's flagship Catholic university and resurrecting a concept that's extinct for a reason.

Garnavich said the theory of geocentrism violates what he believes should be a strict separation of church and science. One answers why, the other answers how, and never the twain should meet, he said.

There is proof in Scripture that Earth is the center of the universe, Sungenis said. Among many verses, he cites Joshua 10:12-14 as definitive proof: "And the sun stood still, and the moon stayed, while the nation took vengeance on its foe.… The sun halted in the middle of the sky; not for a whole day did it resume its swift course."

But Ken Ham, founder of the Creation Museum in Petersburg, Ky., said the Bible is silent on geocentrism.

"There's a big difference between looking at the origin of the planets, the solar system and the universe and looking at presently how they move and how they are interrelated," Ham said. "The Bible is neither geocentric or heliocentric. It does not give any specific information about the structure of the solar system."

But Consolmagno said the very premise of going after Galileo illustrates the theory's lack of scientific credibility.

"Of course, we understand the universe in a far more nuanced way than Galileo did 400 years ago," he said.

"And I would hope that the next 400 years would see just as much development." 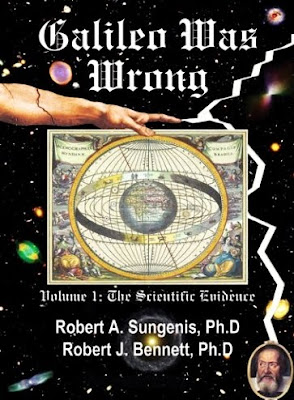 Galileo Was Wrong: The Church Was Right

Galileo Was Wrong is a detailed and comprehensive treatise that demonstrates from the scientific evidence that heliocentrism (the concept that the Earth rotates on its axis and revolves around the sun) is an unproven scientific theory; and that geocentrism (the view that the Earth is in the center of the universe and does not move by either rotation or revolution) is not only supported by the scientific evidence but is admitted to be a logical and viable cosmology by many of the world's top scientists, including Albert Einstein, Ernst Mach, Edwin Hubble, Fred Hoyle and many more.

A STUNNING REPLY TO THIS ARTICLE HAS BEEN POSTED BY DR. ROBERT SUNGENIS AT HIS WEBSITE: WWW.GALILEOWASWRONG.COM. IT IS WELL WORTH THE READ!

I saw notice of this conference last year and at first, thought it was a joke. Do we know anything about who the organizers of this are? Do they have any connection with Mel Gibson's church, which also claims to be Catholic and rejects Vatican II? Brother Guy is a very intelligent and articulate person, and I hope he keeps track of this group and what they are doing. People need to be reminded that the church to which people were subservient in the era before Galileo was not today's church; it was the one that perpetrated the inquisition, crusades, and many other atrocities. Why would anyone want to go back to that?

i was left with the impression last time i visited this subject that it was his treatment of theologians as morons...of which they were. anyhow glad to see the blog up and running...of course i had to report it to the authorities...do not be surprised if you receive a summons from the Cardinals...

Yep Tim...good to be back but they still screwed up the computer....turning them over to the Better Business Bureau.

Cardinals, smardinals...I fear no one with a pointed hat.