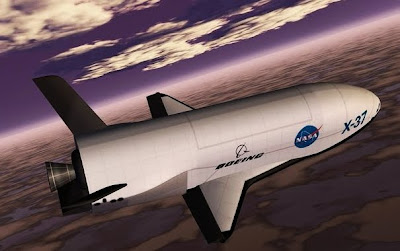 The New York Times
A team of amateur sky watchers has pierced the veil of secrecy surrounding the debut flight of the nation’s first robotic spaceplane, finding clues that suggest the military craft is engaged in the development of spy satellites rather than space weapons, which some experts have suspected but the Pentagon strongly denies.

Last month, the unmanned successor to the space shuttle blasted off from Florida on its debut mission but attracted little public notice because no one knew where it was going or what it was doing. The spaceship, known as the X-37B, was shrouded in operational secrecy, even as civilian specialists reported that it might go on mysterious errands for as long as nine months before zooming back to earth and touching down on a California runway.

In interviews and statements, Pentagon leaders strongly denied that the winged plane had anything to do with space weapons, even while conceding that its ultimate goal was to aid terrestrial war fighters with a variety of ancillary missions.

Now, the amateur sky watchers have succeeded in tracking the stealthy object for the first time and uncovering clues that could back up the surveillance theory. Ted Molczan, a team member in Toronto, said the military spacecraft was passing over the same region on the ground once every four days, a pattern he called “a common feature of U.S. imaging reconnaissance satellites.”

In six sightings, the team has found that the craft orbits as far north as 40 degrees latitude, just below New York City. In theory, on a clear night, an observer in the suburbs might see the X-37B as a bright star moving across the southern sky.

“This looks very, very good,” Mr. Molczan said of the identification. “We got it.”

In moving from as far as 40 degrees north latitude to 40 degrees south latitude, the military spacecraft passes over many global trouble spots, including Iraq, Iran, Afghanistan, Pakistan and North Korea.

Mr. Molczan said team members in Canada and South Africa made independent observations of the X-37B on Thursday and, as it turned out, caught an earlier glimpse of the orbiting spaceship late last month from the United States. Weeks of sky surveys paid off when the team members Kevin Fetter and Greg Roberts managed to observe the craft from Brockville, Ontario, and Cape Town.

Mr. Molczan said the X-37B was orbiting about 255 miles up — standard for a space shuttle — and circling the planet once every 90 minutes or so.

A fair amount is known publicly about the features of the X-37B because it began life 11 years ago as a project of the National Aeronautics and Space Administration, which operates the nation’s space shuttles. The Air Force took over the program in 2006, during the Bush administration, and hung a cloak of secrecy over its budget and missions.

The X-37B has a wingspan of just over 14 feet and is 29 feet long. It looks something like a space shuttle, although about a quarter of the length. The craft’s payload bay is the size of a pickup truck bed, suggesting that it can not only expose experiments to the void of outer space but also deploy and retrieve small satellites. The X-37B can stay aloft for as long as nine months because it deploys solar panels for power, unlike the space shuttle.

Brian Weedon, a former Air Force officer now with the Secure World Foundation, a private group based in Superior, Colo., said the duration of the X-37B’s initial flight would probably depend on “how well it performs in orbit.”

The Air Force Rapid Capabilities Office leads the X-37B program for what it calls the “development and fielding of select Defense Department combat support and weapons systems.”

Mr. Payton, a former astronaut and senior NASA official, has acknowledged that the spacecraft is ultimately meant to give the United States new advantages on terrestrial battlefields, but denies that it represents any kind of space weaponization.

On April 20, two days before the mission’s start, he told reporters that the spacecraft, if successful, would “push us in the vector of being able to react to war-fighter needs more quickly.” And, while offering no specifics, he added that its response to an “urgent war-fighter need” might even pre-empt the launching of other missions on expendable rockets.

But he emphasized the spacecraft’s advantages as an orbiting laboratory, saying it could expose new technology to space for a long time and then “bring it back” for inspection.

Mission control for the X-37B, Mr. Payton said, is located at the Air Force Space Command’s Third Space Experimentation Squadron, based at Schriever Air Force Base in Colorado Springs. He added that the Air Force was building another of the winged spaceships and hopes to launch it next year.

The current mission began on April 22, when an Atlas 5 rocket at the Cape Canaveral Air Force Station in Florida fired the 5.5-ton spacecraft into orbit.

Jonathan McDowell, a Harvard astronomer who tracks rocket launchings and space activity, said the secrecy surrounding the X-37B even extended to the whereabouts of the rocket’s upper stage, which was sent into an unknown orbit around the sun. In one of his regular Internet postings, he said that appeared to be the first time the United States had put a space vehicle into a solar orbit that is “officially secret.”

David C. Wright, a senior scientist at the Union of Concerned Scientists, a private group in Cambridge, Mass., said many aerospace experts questioned whether the mission benefits of the X-37B outweighed its costs and argued that expendable rockets could achieve similar results.

“Sure it’s nice to have,” he said. “But is it really worth the expense?”

Mr. Weedon of the Secure World Foundation argued that the X-37B could prove valuable for quick reconnaissance missions. He said ground crews might rapidly reconfigure its payload — either optical or radar — and have it shot into space on short notice for battlefield surveillance, letting the sensors zoom in on specific conflicts beyond the reach of the nation’s fleet of regular spy satellites.

But he questioned the current mission’s secrecy.

“I don’t think this has anything to do with weapons,” Mr. Weedon said. “But because of the classification, and the refusal to talk, the door opens to all that. So, from a U.S. perspective, that’s counterproductive.”

He also questioned whether the Pentagon’s secrecy about the spacecraft’s orbit had any practical consequences other than keeping the public in the dark.

“If a bunch of amateurs can find it,” Mr. Weedon said, “so can our adversaries.”

same proposition on any satellite