Oil leak...desperate call to a professional 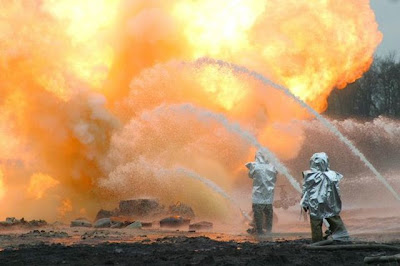 But in his long career of bringing oil well blowouts under control, Mr. Campbell has usually employed a hands-on approach. Fires may have to be extinguished, wellhead equipment repaired, gunk removed. Then, he said, the well has to be told who’s boss: “I’m here, I’m touching you, I’m telling you you’re dead,” is how he describes it. “You just don’t know it yet.”

His latest challenge, however, is a well that only a robot can touch. Mr. Campbell is one of scores of experts working in a command center in Houston to help BP figure out a way to seal its blown-out well 5,000 feet below the surface in the Gulf of Mexico. Rather than just containing the oil as it gushes into the gulf, sealing the well would stop the leak permanently.

Because of the pressure, temperature and remoteness of such deep water, preparations to seal the well have taken time, with the work at the wellhead done by robotic submersibles. There are plenty of things that could go wrong, but Mr. Campbell, an executive vice president of Superior Energy Services whose subsidiary, Wild Well Control, is a leader in the field, is confident of success.

Relief wells are being drilled that would do the job in a few months, BP officials say. But the more immediate plan, which is expected to take place Wednesday morning, is to try a “top kill,” in which heavy drilling mud is pumped into the well, followed by cement, to overcome the pressure of the rising oil. The procedure may involve a “junk shot,” an attempt to choke off the oil flow by bridging gaps in the blowout preventer, the giant stack of equipment that failed when the accident occurred on April 20.

With more than four decades in the well-control business, Mr. Campbell, 65, has done some bridging of his own, between the days of strutting well-cappers like Red Adair (whose exploits were the stuff of the 1968 John Wayne movie “Hellfighters”) and the current crop of quieter, nearly anonymous well-control experts who do as much work planning to forestall blowouts as wrangling them when they occur.

Mr. Campbell got his start in the oil patch when his high school football coach in Bakersfield, Calif., arranged a summer job for him. But he got his start in big-time well-killing with Mr. Adair and Mr. Adair’s partners, Asger Hansen, known as Boots, and Ed Matthews, or Coots. The three would turn to him to make equipment for specific blowouts.

“They’d say, ‘Hey, fat boy, why don’t you just come along with that stuff and make sure it works?’ ” recalled Mr. Campbell, who occasionally adds a self-deprecating twinkle to the twang in his voice.

In the mid-1970s, Mr. Hansen and Mr. Matthews had a falling out with Mr. Adair and formed a competitor, Boots & Coots. It quickly became very successful.

“One should be so fortunate in one’s life to have the skills that those guys had,” Mr. Campbell said. “But as dominant as they were, they weren’t really businessmen.”

So they asked him to be general manager. “But in those days, being a general manager didn’t mean much,” he said. “I was still going into the field with the jobs every day.”

He remembered an incident in Texas when Mr. Campbell fell flat on his back while working on a blowout. Dirt flew everywhere.

Between working for Boots & Coots and, later, for Wild Well, Mr. Campbell has gone into the field from South Texas to Sumatra, including a stint in Kuwait after the 1991 Persian Gulf war.

Kuwaiti officials were convinced that the Iraqi leader, Saddam Hussein, might try to destroy their oil fields and alerted American well-control companies, who prepared to respond based on an estimate of 200 wells. Iraqi troops destroyed more than 900.

“We really thought, he’ll blow up a couple of wells and say, ‘I mean business now,’ ” Mr. Campbell said. “We were all watching CNN just as everybody else was. We could absolutely not believe it.”

Putting out the fires and capping the wells took months. It was dirty work, but not as dirty as it might have seemed.

“It’s black, there’s lots of black soot,” he said. “It looked terrible. But generally, not being dummies, you go to the upwind side and you work in the clean air.”

For the current job, he is working in the conditioned air of an office building. He has been meeting with the submersible pilots to come up with ways for them to do their tasks more easily, and has been testing rubber cubes, golf balls and other materials that may be used to bridge the gaps in the blowout preventer.

Mr. Campbell never went to college — “I’ve got a degree in being a grandpa, that’s all,” he said — but after years in the oil fields, he is at ease talking about subjects like hardness scales, elastomerics and close-packing problems.

Even without the added complication of deep water, he said, well control is a lot different than it used to be. “Today things are done by committees. The executive management gets involved. They may or may not have any technical competence.”

“It generally works out fine,” he said. “It can certainly make things more complicated.”

“For us,” he added, “none of this is theoretical.” At a blown-out wellhead, the earth may be shaking for a quarter-mile around, and the noise is deafening, even with earplugs. “We can’t have someone sit in the office and say, ‘Well, I need you to do this,’ ” Mr. Campbell said.

“You have to go into the field. You have to experience firsthand the difference that certain conditions make.”

It is not lost on him that with this job, he does not have a choice either. While he is proud of what he called the “absolutely marvelous” preparations for the efforts down on the seabed, there is no way for him or anyone else to be there.