More on Pluto and classification 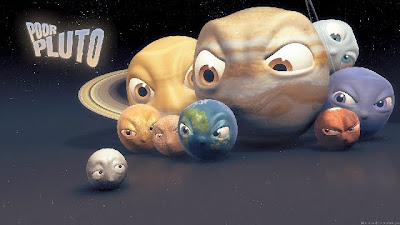 Ms. Kornfeld...do read and check out the link [fourth essay listed] provided in the body of this essay. Don't let the math bother you.

Astrobiology Magazine
When Pluto was discovered in 1930, it was considered to be the ninth planet of our solar system. Since that time, astronomers have discovered similar icy objects in that far-distant orbital region of the Sun known as the Kuiper belt. Many astronomers questioned whether Pluto should be grouped with worlds like Earth and Jupiter, and in 2006 this debate led the International Astronomical Union (IAU), the recognized authority in naming heavenly objects, to formally re-classify Pluto as a dwarf planet.

New research from The Australian National University has further reduced the status of Pluto by suggesting there are many more dwarf planets in the solar system than previously thought.

ANU astronomers have published results that would reclassify what it is to be a dwarf planet, increasing the number of Pluto’s fellow travellers by a factor of ten.

Charley Lineweaver and Marc Norman from the ANU Planetary Science Institute looked at how spherical the icy moons in our solar system are, and recalculated the size of objects at the boundary between dwarf planets and small solar system bodies.

Previous estimates have classified icy objects with radii larger than 400 km as dwarf planets. The new research suggests that this radius should be closer to 200 km, which would increase the number of objects classified as dwarf planets to roughly 50.

“Small solar system objects are irregularly shaped, like potatoes,” Lineweaver said. “If an object is large enough that its self-gravity has made it round, then it should be classified as a dwarf planet. We calculated how big rocky objects (like asteroids) have to be, and how big icy objects (like the moons of the outer planets and objects farther out than Neptune) have to be, for their self-gravity to make them round. For icy objects we found a ‘potato radius’ of roughly 200km – about half as large as the roughly 400km radius now used to classify dwarf planets."

“The boundary between dwarf planets and small solar system bodies is somewhat arbitrary, but is based on the concept of hydrostatic equilibrium, or how round an object is," Lineweaver added. "Whether the self-gravity of an object is strong enough to make the object round depends on the strength of its material. That is why strong rocky objects need to have a radius of roughly 300km before they turn from lumpy, potato-shaped bodies into spheres, while weaker icy objects can be spheres with a radius of only roughly 200km.”

Lineweaver and Norman’s paper "The Potato Radius: a Lower Minimum Size for Dwarf Planets" will be published in the Proceedings of the 9th Australian Space Science Conference, eds W. Short and I. Cairns, and is available at http://www.mso.anu.edu.au/~charley/publications.html .

Studying dwarf planets and objects in the Kuiper Belt can help astrobiologists get a better picture of how our solar system formed and how it was able to support habitable worlds like Earth. Some scientists also believe that impactors that have struck Earth in the past, such as comets, could have originated from this mysterious region of the solar system. Studying Kuiper Belt objects can help astrobiologists understand the likelyhood of such objects entering into collision-course orbits with Earth in the future.
Posted by Mercury at 3:08 PM

Thanks for thinking of me. My delay in responding is due to my having had to devote most of my time to a research project for my astronomy class at Swinburne. So at least I have a good excuse.

I did read about this request by Australian astronomers, and I strongly disagree that adding more dwarf planets "further reduces" the status of Pluto. Remember, Dr. Alan Stern, who coined the term "dwarf planet" to begin with, stated many times that he believes dwarf planets are the most numerous type of planet in the solar system and likely in other solar systems as well. The idea that having more of them diminishes Pluto is nothing more than a "spin" on the matter.

Again, I, like Stern, have no problem with this as long as dwarf planets are considered a subclass of planets. Pluto is likely more rocky than icy; it is estimated by Stern to be 75 percent rock and almost certainly geologically differentiated. I don't know if these smaller planets are geologically differentiated, but if they are in hydrostatic equilibrium, they are planets too. We just need to get used to a solar system with a whole lot of planets!

An interesting thing I've learned in my astronomy classes is that whether we are talking about planets, stars, or galaxies, the smaller ones, the "dwarfs," are the most numerous.

Thank you for the link. I will download the paper and read it. However, I still stand with the many astronomers who dispute the claim that the IAU is "the authority" on celestial bodies. That statement could most certainly be called into question these days.