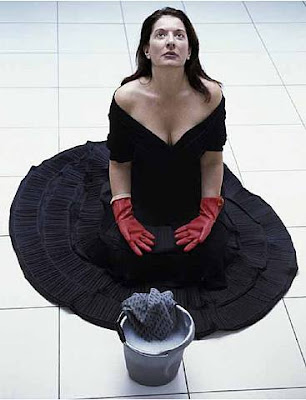 Is this "art". I guess it could be no worse than listening to Maurice Ravel's Boléro a few hundred times.

The New York Times
At 5 p.m. Monday the longest piece of performance art on record, and certainly the one with the largest audience, comes to an end. Since her retrospective opened at the Museum of Modern Art on March 14, the artist Marina Abramovic has been sitting, six days a week, seven hours a day in a plain chair, under bright klieg lights, in MoMA’s towering atrium. When she leaves that chair Monday for the last time, she will have clocked 700 hours of sitting.

During that time her routine seldom varied. Every day she took her place just before the museum doors opened and left it after they closed. Her wardrobe was consistent: a sort of concert gown with a long train, in one of three colors (red, blue and white).

Always her hair, in a braided plait, was pulled forward over her left shoulder. Always her skin was an odd pasty white, as if the blood had drained away. Her pose rarely changed: her body slightly bent forward, she stared silently and intently straight ahead.

There was one variable, a big one: her audience.

Visitors to the museum were invited, first come first served, to sit in a chair facing her and silently return her gaze. The chair has rarely, if ever, been empty. Close to 1,400 people have occupied it, some for only a minute or two, a few for an entire day.

Sitting with Ms. Abramovic has been the hot event of the spring art season. Celebrities — Bjork, Marisa Tomei, Isabella Rossellini, Lou Reed, Rufus Wainwright — did a stint. Young performance artists seized a moment in the limelight. One appeared in his own version of an Abramovic gown to propose marriage. Certain repeat sitters became mini-celebrities, though long-time waiters on line stared daggers at those who sat too long.

Thanks to the Internet many people saw all of this without being there. A daily live feed on MoMA’s Web site, moma.org, has had close to 800,000 hits. A Flickr site with head shots of every sitter has been accessed close to 600,000 times. Yet foot traffic has been heavy. By the museum’s estimate, half a million people have visited all or part of the Abramovic retrospective, “The Artist Is Present,” of which the atrium piece is a small part.

The rest of the show, installed on the museum’s sixth floor, is a problem. It is made up primarily of videos and photographs of the artist’s performances over nearly 40 years, beginning when she was a student in Belgrade, Yugoslavia, where she was born in 1946.

Her solo work from the early 1970s was hair-raisingly nervy. She stabbed herself, took knockout drugs, played with fire. For one piece she stood silent in a gallery for six hours, having announced that visitors could do anything they wanted to her physically. At one point a man held a gun to her neck. Her eyes filled with tears, but she didn’t flinch.

In 1976 she started collaborating with the German artist Uwe Laysiepen, known as Ulay. Some of their performances were punishing athletic events, as they slammed their bodies together or into walls. Others were almost aggressively passive. For a piece called “Imponderabilia” they stood facing each other, nude, in a narrow doorway in a museum. Anyone wanting to go from one gallery to another had no choice but to squeeze awkwardly and intimately between them.

Ms. Abramovic restaged “Imponderabilia,” along with some other works, for the MoMA show using actors. And although the nudity caused a buzz, the restaging fell flat. Two elements that originally defined performance art as a medium, unpredictability and ephemerality, were missing. Without them you get misrepresented history and bad theater.

Evidently Ms. Abramovic doesn’t agree. In 2005, at the Guggenheim Museum, she restaged vintage performance pieces by other artists (Vito Acconci, Joseph Beuys) with herself in the leading roles. She recently established the Marina Abramovic Institute for Preservation of Performance Art, to be housed in upstate New York.

In the near future she will be collaborating with the director Robert Wilson on a stage work based on her life. By the sound of it, this project will mark her furthest departure yet from old-school performance art and into the realm of closely scripted theater. What it will have, however, is her charismatic personal presence, and that means a lot. That presence is probably the most important ingredient missing from the restagings. It is what makes the atrium performance compelling. For better and worse, it has carried Ms. Abramovic’s career.

One of her lifelong heroes is the opera singer Maria Callas, to whom she can bear a striking physical resemblance. Callas was a disciplined, risk-oriented musician, made vulnerable by a voice that began to disintegrate early. Increasingly, as she aged, every performance became an ordeal, an invitation to failure. Her willingness to face failure became the prevailing drama of her life. It was a drama of survival, and her fans had a part in it: she needed them to need her, so they did.

That’s that classic diva dynamic. And what we’re seeing in the MoMA atrium is basically a 700-hour silent opera. Ms. Abramovic, with her extravagant costume, her bent shoulders and her mournful gaze, is the prima donna. Visitors are cast as rapt audience, commenting chorus, supporting soloists. Unpredictability is in the air: Will she make it through the day? Will she faint from pain? Will she cancel at the last minute?

When I dropped by last week, one sitter, a repeater, sat across from Ms. Abramovic with his hands clasped to his chest, like a tenor about to burst into song or a worshiper transported in prayer. Perfect. That Ms. Abramovic will be collaborating with Mr. Wilson, a once-radical creator of epic experimental works and now best known for his ritualistic productions of Puccini and Wagner, is also perfect.

Of restagings I remain an unbeliever. Of Ms. Abramovic’s recent overblown solo pieces, seen in video in the sixth-floor installation, I’m not a fan. But the atrium performance works because she is simply, persistently, uncomfortably there. As of 5 p.m., she won’t be, though. The klieg lights will dim. The audience will move on. Something big will be gone, and being gone will be part of the bigness.
Posted by Mercury at 6:07 AM