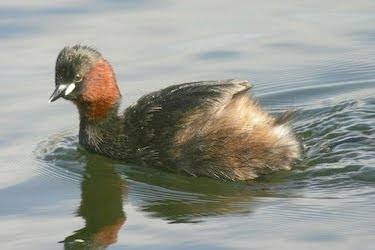 BBC
The Alaotra grebe is extinct, according to the latest assessment of the world's rarest birds.

The last known sighting of the bird was in 1985 and experts have now confirmed its demise, killed off by a combination of poaching and predatory fish.

The Malagasy species, which lived in Lake Alaotra, is the first confirmed bird extinction since 2008.

However, fortunes have improved for rare birds such as the Azores bullfinch and Colombian yellow-eared parrot.

The Alaotra grebe (Tachybaptus rufolavatus) was a medium-sized bird with small wings that inhabited Lake Alaotra and surrounding areas in Madagascar.

Due to its tiny wings, the bird was thought incapable of flying long distances, living a mainly sedentary lifestyle on the lake and in surrounding ponds and highland lakes.

Some birds with characteristics of the grebe were seen in 1985, 1986 and 1988, but these are thought to be hybrids with another grebe species.

Surveys in 1999 and a visit by experts in 2000 found no individuals, or any grebes belong to the same genus Tachybaptus.

No direct observations of the species have been made since and hopes that the bird might survive were dashed after a recent expedition to nearby Lake Amparihinandriamabavy failed to find any grebes.

Officials have now declared the bird extinct in the latest update to the IUCN Red List of endangered and threatened birds.

The Red List, regarded as the most authoritative assessment of the state of the planet's species, draws on the work of scientists around the globe.

"No hope now remains for this species. It is another example of how human actions can have unforeseen consequences," says Dr Leon Bennun of Birdlife International, which evaluates the status of rare birds for the IUCN Red List.

The grebe is thought to have been driven to extinction by a combination of factors.

The bird, usually found in pairs, fed almost exclusively on fish in Lake Alaotra, a large brackish lake which had shores once covered in dense papyrus and reeds.

But in recent years, fishermen have covered much of the lake with monofilament nylon gill-nets which can kill diving waterbirds.

These nets were introduced after the grebe had already significantly declined, though they may have killed remaining birds.

Carnivorous fish (Micropterus and Ophiocephalus) introduced into the lake are also thought to have significantly contributed to the grebe's extinction, while the introduction of other invasive mammals, fish and plants likely depleted the grebe's food sources.

Knowing exactly when a species has gone extinct is extremely difficult, as records of sightings can be patchy or unsubstantiated.

Also, comprehensive surveys must be completed to ensure a species does not survive in previously unexplored habitats.

For those reasons, species are often declared extinct many years after they have last been seen.

The last bird species to be confirmed extinct is the Liverpool pigeon (Caloenas maculata), declared extinct in 2008.

However, this Pacific species is known from just two specimens, one of which has been lost. It likely went extinct before Europeans colonised the Pacific.

In 2005, the Thick-billed Ground-dove (Gallicolumba salamonis) was declared extinct, it too known from two specimens, the last caught in 1927.

Modern species thought to be extinct, but not yet confirmed, include the Po'ouli (Melamprosops phaeosoma).

The last known survivor of this honeycreeper species died in captivity in 2004, despite huge efforts to rescue it.

Surveys have yet to be done to confirm it no longer survives on the remote highland slopes of Hawaii.

Another species suffering from the impacts of invasive species is the Zapata Rail (Cyanolimnas cerverai) from Cuba.

It has been updated to "Critically Endangered" on the latest Red List, under threat from introduced mongooses and exotic catfish.

Only one nest has ever been found of this species.

However the new Red List does highlight some conservation success stories.

The Azores bullfinch (Pyrrhula murina) has been downlisted from "Critically Endangered" to "Endangered" after efforts to restore its habitat.

In Colombia, the Yellow-eared parrot (Ognorrhynchus icterotis) has also benefited from protection of its nest sites and education programmes, leading to its status being downgraded to "Endangered".

Around 190 bird species out of more than 10,000 known are thought to have gone extinct since modern records began.

guardian.co.uk
The Alaotra grebe has been driven to extinction by the introduction of non-native carnivorous fish to lakes in the area of east Madagascar, and by the use of fishing nets which caught and drowned the bird.

A grebe from Madagascar has become extinct after carnivorous fish were introduced to the lakes where it lived, experts said today as they warned that one-eighth of bird species now face extinction.

The number of birds threatened with global extinction has risen, according to the latest assessment, and now stands at 1,240 species.

The International Union for Conservation of Nature (IUCN) red list's update for birds, carried out by Birdlife International, said 25 species had been added to the list of those at risk.

Just under half were added because they are newly recognised species, such as two buntings from the UK overseas territory of Tristan da Cunha, but 13 joined the list because they are more at risk of being wiped out.

There was some good news in the update, including for the Azores bullfinch, which was downgraded from "critically endangered" to the lower "endangered" category after conservation work to remove the threat caused by non-native plants in its habitat and to restore natural vegetation.

But the Alaotra grebe has been driven to extinction by the introduction of non-native carnivorous fish to lakes in the area of east Madagascar where it was found, and by the use of fishing nets which caught and drowned the bird.

The loss of the grebe brings the total number of bird species which are thought to have become extinct since 1600 to 132.

The RSPB's international director, Dr Tim Stowe, said: "The confirmation of the extinction of yet another bird species is further evidence that we are not doing enough in the fight to protect the world's wildlife.

"Although there are some key successes, overall the trend is downward, bringing more species year on year to the brink of extinction and beyond."

Other wetland birds are under increasing pressure from the introduction of invasive species, as well as from drainage and pollution of their habitats, the conservationists warned.

The marsh-dwelling Zapata rail, from Cuba, has been uplisted to critically endangered, the highest category of risk of extinction, in the face of threats from introduced mongooses and exotic catfish.

The only nest of the secretive species ever found was described by the Caribbean ornithologist James Bond - whose name provided the inspiration for Ian Fleming's famous spy.

Once common wader species in Asia and Australia, such as the great knot and the far eastern curlew have seen numbers decline sharply in the face of pollution and drainage of coastal wetlands.

Dr Stuart Butchart, Birdlife's global species programme officer, said: "Wetlands are fragile environments, easily disturbed or polluted, but essential not only for birds and other biodiversity but also for millions of people around the world as a source of water and food."

Elsewhere, the white-bellied cinclodes from Peru and the black-winged starling, found in Indonesia, have also been uplisted to critically endangered.

And in Europe, the Corsican nuthatch and the recently recognised Monteiro's storm-petrel, have been added to the list of those birds under threat of disappearing.

But three birds have been dropped from the list of threatened species because of improvement in their status or reductions in threats - the Laysan albatross, the ochraceous piculet, a kind of woodpecker found in Brazil, and the Elliot's pheasant from China.

And along with the Azores bullfinch, the yellow-eared parrot from Colombia and the Chatham albatross have been downlisted from critically endangered to endangered.

Dr Butchart said: "These successes show what is possible, and they point the way forward to what needs to be done by the global community.

And he said: "2010 is the International Year of Biodiversity; world leaders failed to stem the decline of biodiversity. We cannot fail again."

Alaotra grebe [Wikipedia]
Posted by Mercury at 6:30 AM