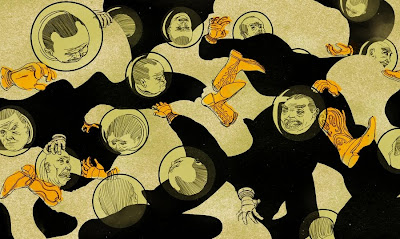 Time
In terms of Senate hearings, this one had all the right stuff: high stakes, passionate speeches, shutdowns and — as if that weren't enough — astronauts with a score to settle. Not just any old astronauts either. Attending the Senate Commerce, Science and Transportation Committee's forum on the future of human spaceflight were the first and last men to walk on the moon — the semi-reclusive Neil Armstrong and the slightly younger (and much sassier) Eugene Cernan.

The attendance of these two white-haired history makers couldn't have been more poetically appropriate. At the heart of the hearing, which took place on Wednesday on Capitol Hill, was President Obama's recommendation to cancel the Constellation program, an expensive, George W. Bush–bred collection of projects that involves building spacecraft meant to take Americans back to the moon by 2020.

So far the program has cost $9 billion and would require billions more that America doesn't have to spend. That made Constellation one of two things in the minds of those at the hearing: either a substantial investment that should be kept alive with some creative budgeting or a white elephant that should be put to sleep before it tramples any more government coffers. The towering committee chair, West Virginia Democratic Senator Jay Rockefeller, called himself a "third way" man open to other options, but his statements at the hearing landed him in the space-skeptic camp.

The termination of Constellation would crucially coincide with the retirement of America's rickety shuttle fleet, leaving the U.S. without its own means of propelling people to the moon or International Space Station until new crafts are developed and built.

Perhaps unsurprisingly, the astronauts present were avidly against shutting the program down. Cernan went so far as to say that the President's proposal had no focus and was a "blueprint" for how to get absolutely "nowhere," and that it was the "Administration's pledge to mediocrity." Armstrong kept his testimony more tempered, but both had already signed open letters last month calling Obama's plan "devastating." And they meant that not just in practical terms; their rhetoric quickly soared, both in the epistles and at the hearing, to heights where America's geopolitical standing, pride, leadership status and bright young minds could be seen on the chopping block below.

Obama's suggestion, supported by NASA Administrator Charles Bolden, is to spend money shifting the spacecraft-building onus onto the private sector while NASA concentrates on developing a super-advanced ship, one that probably relies on technologies still in the making, as was the case when President Kennedy told NASA to get on up to the moon in 1962. Obama and Bolden's projections are that the ship could be designed by 2015, landing on an asteroid by 2025 and heading to Mars by the mid-2030s — dates and goals that the space community finds frustratingly general and uninspiring, especially compared to the detailed plans attached to the Constellation project.

Some of the Senators, including Texas Republican Kay Bailey Hutchison and Louisiana Republican David Vitter, expressed unbridled skepticism of the private sector's ability to create safe spacecraft. Vitter said there is "no evidence" that the commercial sector can supply this demand "in the near term," despite the progress of companies like SpaceX, run by PayPal founder Elon Musk, which has built a rocket that sits at Cape Canaveral ready to test-launch.

In any case, projections for using the private sector are cheaper at the moment. Musk has said he would sell astronauts seats for about $20 million. The only other option for getting into space, hitching a ride with the Russian government, costs about $50 million a pop. (America will be stuck with the Russians for a while even if Constellation goes on as planned, but the astronauts and some legislators worry that Obama's plan would extend the flightless "gap" by several years because of the commercial sector's inexperience.)

Much harder to compare were the relative arguments about how the intangibles should be figured into the plan for NASA's future. Rockefeller opened with a statement making it clear that he did not support manned space exploration as an end in itself. At one point, when he asked the astronauts point-blank what the merit of manned spaceflight was in terms of what concrete improvements it held for the "human condition," Cernan responded with a stage-worthy speech, as romantic and impassioned as it was vague: "Curiosity is the essence of human existence. Who are we? Where are we? Where do we come from? Where are we going? ... I don't know. I don't have any answers to those questions. I don't know what's over there around the corner. But I want to find out. It's within our hearts and souls and desires to find out and seek knowledge. Discovery is what it's all about."

That last line has proven to be an especially critical point in the debate, given that trips to the moon, where we went 40 years ago, are most immediately on the line. While the astronauts pointed out, as other scientific stakeholders have, that landing on the moon raised more questions than it answered, that doesn't change the American taxpayers' general feeling that the moon isn't really a new frontier. Norm Augustine, who headed the committee that reviewed NASA's budgetary options, documented that public sentiment during months of research; he also dejectedly pointed out during the hearing that almost the same amount of time had elapsed between the Wright brothers' first flight and the first moon landing as would have elapsed between the first moon landing and the return trip the astronauts were fighting so hard to salvage.

Arguments about what the plan would mean for America's geopolitical standing, the impetus for the space race in the 1960s, seemed similarly unsubstantiated. "I am convinced it will absolutely relinquish our leadership role in human spaceflight, certainly for our lifetimes, maybe longer," Vitter said. Some efforts are making Americans nervous for their leadership role. China, for example, is flowing unprecedented funding into its space program, unchecked by budget requests and delays, but its increased activity has still done little to motivate the U.S., unlike the Cold War worries that lit fires under previous administrations.

Florida Democratic Senator Bill Nelson, a longtime NASA advocate and big believer in space for space's sake, ended the session by asking Armstrong why it was worth returning to the moon. The astronaut, whose appearance had been much anticipated given his habitual hesitance to speak out in support of space programs or otherwise, responded meanderingly. There could be valuable minerals, he said, or we could research how to make permanent settlements, among other things. Armstrong had previously urged the continued use of the soon-to-be-retired space shuttles, which Augustine's committee and other review boards have deemed to be on their last legs, and twice stumbled trying to turn on his microphone after almost sitting in the wrong chair. One couldn't help but wonder whether he's more an icon of NASA's past than a voice for its future. "We need a new direction," Rockefeller said at the beginning of the hearing. "The American people deserve the most from their space program. NASA's role cannot stay static."