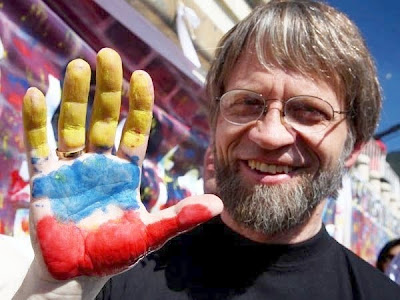 "Philosopher King"?...make that "Philosopher President". Limelight global politics is being nudged to allow another...Antanas Mockus who was former mayor of Bogotá and now running for Columbia's president.

Green Party candidate Antanas Mockus – a mathematician, philosopher, and former mayor Bogotá – has seen a surge in popularity in the Colombia election. What sets him apart, he tells the Monitor, is his 'decency.'

The Christian Science Monitor
The airport security guard's wand squealed when it passed over the pocket of presidential candidate Antanas Mockus's trousers as he prepared to embark on a recent campaign trip.

Puzzled, Mr. Mockus reached in and pulled out a No. 2 pencil with a metallic band around the eraser.

"They discovered my weapon," he says, recalling the incident with an impish smile. The pencil is one of the symbols of his campaign, which emphasizes education as a tool to transform society.

A few months ago, no one thought Mockus – a mathematician, philosopher, and former mayor of Colombia's capital, Bogotá – had much of a chance in the elections, but his unorthodox campaign style has turned Col­ombia's race for the presidency on its head.

Rising from a distant 3 percent in opinion polls in March, Mockus has surged over 30 percent, placing him in a dead heat with former Defense Minister Juan Manuel Santos, considered the heir to the legacy of the famously popular president, Álvaro Uribe.

Mockus's political career has been marked by his steadfast refusal to participate in traditional party politics. As mayor of Bogotá, he made a name for himself with his wacky antics, such as dressing up in spandex tights as "Super Citizen." But he is also recognized for his uncompromising honesty and zero tolerance for corruption.

It is that quality that appears to have captured the imagination of a nation that has tired of corruption, vote buying, and an "anything goes" attitude.

"Mockus represents a new way of doing politics," says analyst Ricardo Garcia, "and he has managed to act as a catalyst for the desire of voters to do away with the political favors and short cuts" that have historically plagued politics in Colombia.

Francisco Sanchez, a business consultant, says that he sees many similarities in the proposals from Mr. Santos and Mockus; the difference is the way that the two men do politics.

"The big thing at stake here is a change in the political culture," says Mr. Sanchez, who plans to vote for Mockus. "We have a chance to radically change the paradigm that politics has been built on, which is political favors and patronage."

In an interview while speeding through the Caribbean coastal city of Santa Marta in a bullet-proof SUV, Mockus explains his own meteoric rise in the simplest of terms:

"Colombians see in me someone who's good," he says, adding that he represents, above anything else, the desire for "decency."

Mockus, the son of Lithuanian immigrants, can shift quickly from a distant philosophical air to a playful, eccentric demeanor. At rallies his often lofty platitudes are lost on some followers.

But his wingmen, Luis Eduardo Garzón and Enrique Peñalosa (also both former Bogotá mayors who are essential to his team), and his running mate, Sergio Fajardo (a former mayor of Colombia's second-largest city, Medellín), have the magnetism to rouse the crowds with thundering speeches.

And his followers have been inspired to take the initiative in his campaign.

"Mockusians" design and print campaign posters on their own computers. Young voters organize flash mobs where they freeze in a certain position in any public area until enough passers-by express interest, then reveal their green Mockus T-shirts and chant his slogans.

Much of the political organizing happens on Facebook and Twitter, new elements in Colombian electoral politics, elements that Mockus has dominated.

Still, for many people in the countryside, where rebels and militias roam free, security is a top issue and many people there know little about Mockus, Facebook, or philosophy. Opponent Santos is expected to carry many of the rural areas in the election.

"We could still see a lot of surprises May 30," says Jaime Duarte, a political analyst at Bogotá's Universidad Externado.

Antanas Mockus [Wikipedia]
Posted by Mercury at 5:54 AM