Brazil nuts...a commodity of the past? 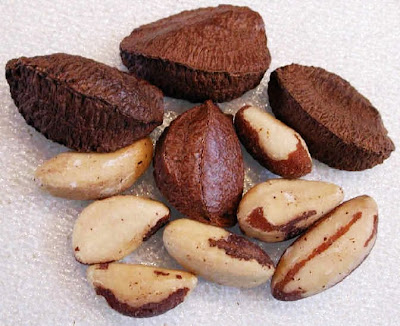 My oh my, what will Planters use for space fillers in their mixed nuts?

BBC NEWS
A study examining the natural dispersal of Brazil nuts has suggested that intensive harvesting could threaten future regeneration of the trees.

Researchers found that large rodents quickly ate the nuts, rather than caching them, when supplies were scarce.

When supplies were plentiful, almost twice as many nuts were buried, increasing the chance of successful germination, the team added.

The findings appear in the Journal of Tropical Ecology.

The scientists from Norway, Brazil and the UK said that very little was know about the fate of Brazil nuts under natural condition, despite it being one of the most economically important non-timber crops to come out of Amazonia.

In order to get a better understanding of how the seeds were dispersed, they tracked 900 marked seeds to see how seasonal food availability affected agoutis' and acouchis' - large scatter-hoarding rodents - caching rates, dispersal distances and how long the seeds were buried before being eaten.

"We basically found that the seasons had a very strong effect on the dispersal distances and what happened to the seeds themselves," explained Torbjorn Haugaasen, an ecologist at the Norwegian University of Life Sciences.

"During the wet season (April) - when there are a lot of other fruits in the forest - more seeds were cached for later retrieval," he added.

"In the dry season (September), on the other hand, more seeds were eaten immediately because there was not that much food around and the rodents needed to draw on the food resource.

"Seeds were also taken further away during the dry season, which suggests that the rodents saw them as a more valuable resource than during the wet season," Dr Haugaasen told BBC News.

The field study, carried out during 2006, showed that 74.4% of seeds were buried during the wet season, compared with just 38.2% during the dry season.

The team suggested that collecting too many Brazil nuts from an area could replicate "dry season" conditions for the rodents.

"Reduced seed availability due to intensive harvesting could potentially create a dry-season scenario where most seeds succumb to pre-dispersal predation, thereby adversely affecting the natural regeneration of Brazil nut trees," they wrote.

The researchers said that populations of two large rodent species were responsible for the dispersal of the Brazil nut tree seeds: agoutis and acuchis.

However, they added, only the agoutis were capable of gnawing through the hard, thick outer casing of the fruit and releasing the seeds (Brazil nuts).

Agoutis, which can weigh up to 6kg, are found throughout the same range as the Brazil nut trees in South America.

"The (trees) therefore rely almost entirely on these large terrestrial rodents for the release of their well-protected seeds," the team explained.

"Those seeds not consumed within the germination period (12-18 months) may germinate, and seeds may remain viable for at least six years."

Scatter-hoarding also benefits plants in a number of ways, such as transporting seeds away from the parent plants and increasing the probability of reaching a site more suitable for germination.

Dr Haugaasen explained that the team decided to carry out the study in order to build on the findings of a 2003 paper published in Science, which first identified the link between intensive harvesting and the lack of young Brazil nut trees.

Writing in the 2003 paper, researchers said: "Persistently harvested stands were characterised by larger (and presumably older) trees and few or no juveniles."

But, they observed: "Juveniles were most common in unharvested and lightly harvested stands."

However, Dr Haugaasen said, the people harvesting the nuts could unknowingly be contributing to the regeneration of the trees, as some nuts were accidentally dropped as they were carried out of the forest.

"We actually found seedlings along the path used by the collectors. However, this does not mean that they are all going to reach maturity because they are in (vulnerable) places."

But he warned that restricting nut collecting could prove to be counterproductive because the harvests were a key source of income for local communities.

"Alternative possibilities, such as managed planting of seedlings in natural gaps in the forest might be a better solution," he suggested.

Dr Haugaasen said that the next step for the researchers was to look at the "management implications" of their findings.

"We also need to know how the hunting of these rodents can effect the natural regeneration of these trees," he added.

"You can have a negative impact by reducing the number of these rodents.

"However, if you have a large number of seeds already buried by a rodent before it is shot, no-one else knows where those seeds are.

"So, you could arguably have a positive impact on regeneration."

Further studies on the ecology of Brazil nut trees are expected to be published in the coming 12 months.
Posted by Mercury at 7:56 AM

we could easily take the employees of the Department of Energy, Department of Education...and Department of Agriculture....lay them off and hire people to replant forests....at least we would be receiving something for tax dollars