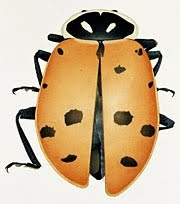 A ladybird beetle found near the Hanford, Wash., nuclear facilities in 1998. The left wing and outer shell are shorter than those on the right. 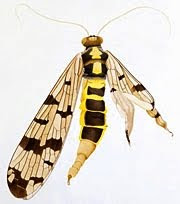 A scorpionfly collected in 1988 near a nuclear power plant in Reuental, Switzerland. Both wings on the right side are deformed, and the abdomen is misshapen. 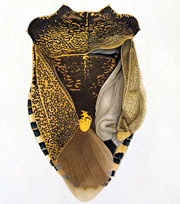 A tree bug collected in 1992 near Zurich, Switzerland. The right wing is crumpled and has pushed up the thorax.
"Arts: Swiss Artist Catalogs Mutant Insects Around Nuke Plants"

Wired
On The Simpsons, the effects of nuclear contamination are conspicuous and comedic. In nature, though, they're often subtle — and sometimes strangely beautiful. Scientific illustrator Cornelia Hesse-Honegger details these minute mutations in the so-called true bugs she collects near nuclear facilities and areas of chemical contamination. True bugs don't travel far, and they "suck the liquid from the plants they live on," she says. "So if the plant is contaminated, they take a lot of radioactivity into their bodies."

Conventional wisdom holds that nuclear power stations don't leak enough radiation to create malformed organisms. But in some locations, Hesse-Honegger discovered mutations — curtailed feelers, misshapen legs, asymmetrical wings — in as many as 30 percent of the bugs she gathered. That's 10 times the overall rate of about 3 percent for insects found in the wild. "For me, the mutated bugs were like prototypes of a future nature," she says. A selection of Hesse-Honegger's work will be shown this fall in Berlin.

"A wing and an error"

The San Diego Union-Tribune
On the afternoon of April 26, 1986, Cornelia Hesse-Honegger was painting mutated laboratory flies, part of her job as a scientific illustrator at the Natural History Museum in Zurich, when the news drifted in:

The Chernobyl nuclear power plant, near the Ukrainian town of Pripyat, had experienced a catastrophic meltdown. Plumes of radioactive material were spewing out, heading west. Within days, they would sweep over western Russia and much of Europe, even reaching parts of North America.

Hesse-Honegger looked at the flies she was painting, their distorted bodies the tangible consequence of intentional X-ray exposure. Now “radioactivity was spread all over Europe, including Switzerland,” Hesse-Honegger said. Everybody and everything downwind of Chernobyl would become, like the flies, part of a giant lab experiment.

In the 22 years since Chernobyl, innumerable studies have been conducted to assess the health and environmental consequences of the radiation release. Answers have been mixed and remain hotly debated. At least one aspect of the aftermath, though, has garnered relatively little interest or study: What happened to bugs?

At the time, Hesse-Honegger suspected quite a lot, and none of it good. But she could find little relevant research. When she asked a distinguished colleague what he thought, the geneticist declared radiation levels in Europe too low to have much of an effect, if any, on bugs.

Insects were too small and simple, he said, to be much bothered by radiation.

Hesse-Honegger was not persuaded. The 64-year-old artist, who has been painting biological specimens for more than 30 years, had come to regard the irradiated mutant insects she drew as “physically rendered prototypes of our destructive behavior.” She thought nuclear radiation boded ill for all creatures, great or small, two legs or six. She set out to find some scientific proof.

Over the next two decades, Hesse-Honegger collected more than 16,000 insect specimens, primarily true bugs, an order of insects (Heteroptera) consisting of roughly 40,000 known species, from cicadas and leafhoppers to aphids and shield bugs.

Hesse-Honegger gathered these insects at sites throughout Europe and from every continent except Australia, visiting fields and forests, homes and gardens near working nuclear plants and waste sites, including Three Mile Island in Pennsylvania and the decommissioned nuclear production facility near Hanford, Wash.

Then, she drew what she found, producing more than 300 watercolor illustrations depicting various types of malformations, some pictured here. The insects were drawn true to scale, each detail precisely measured with a microscope. To reproduce the insects' colors fully and accurately, Hesse-Honegger painted them without any shadowing effects. The results are meticulously rendered, vibrant and almost photographic in detail.

“This is far above the values expected for natural populations, about 1 percent, or those determined for true bugs living in biotopes considered as relatively intact, 1 (percent) to 3 percent,” she writes in a paper to be published in the journal Chemistry & Biodiversity.

Her research uncovered another surprising finding: It was not proximity to a nuclear facility that determined physical damage to the bugs, but rather wind direction and local topography. Areas downwind of a nuclear facility, even those at a great distance, had much higher rates of insect malformations than closer but protected areas.

Hesse-Honegger found that radioactive elements such as tritium, carbon-14 and iodine-131 were constantly being emitted by functioning nuclear power plants, transported as aerosols on the wind and absorbed by host plants consumed by insects.

“Such a low but long-lasting dose of radiation can be far more damaging than a short-term high dose,” Hesse-Honegger writes. “In addition, hot alpha and beta particles are significantly more dangerous than gamma radiation because they are absorbed by the body and essentially irradiate it from within. True bugs seem to be particularly sensitive to this.”

Whether humans are comparably affected by downwind radiation isn't sufficiently documented. There are also questions about whether at least some of the damage to the insects was the result of natural phenomena, such as age or conflicts with predators.

Hesse-Honegger said her work should be viewed as “a serious alarm call.” She said more research must be done to investigate the long-term effects of low-level artificial radiation, specifically on plants and animals, and what constitutes safe levels.

True bugs (and possibly other overlooked life forms) appear to be sensitive bio-indicators of harmful radiation, she said. They may be tiny skittering “canaries,” suffering first from a poison none of us can feel or see.
Posted by Mercury at 6:06 AM