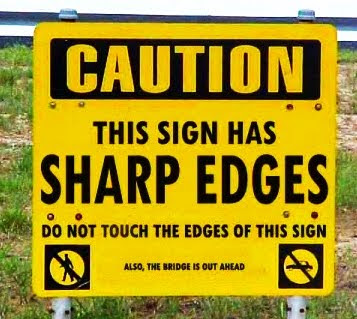 Will we see warning labels on a can of Planters' Cocktail Peanuts?
"Labels Urged for Food That Can Choke"

The New York Times
On a July afternoon in 2006, Patrick Hale microwaved a bag of popcorn for his two young children and sat down with them to watch television. When he got up to change the channel, he heard a strange noise behind him, and turned to see his 23-month-old daughter, Allison, turning purple and unable to breathe.

As a Marine, he was certified in CPR, but he could not dislodge the popcorn with blows to her back and finger swipes down her throat. He called 911, but it was too late: by the time Allison arrived at the hospital, her heart had stopped beating. An autopsy found that she had inhaled pieces of popcorn into her vocal cords, her bronchial tubes and a lung.

“Neither one of us knew that popcorn was unsafe,” said her mother, Christie Hale of Keller, Tex.

Now, the American Academy of Pediatrics, the nation’s leading pediatricians’ group, wants that to change. Saying that food should be subject to as much scrutiny as toys, it is calling on the Food and Drug Administration to require warning labels on foods that are known choking hazards, and to evaluate and monitor food for safety.

“You have a SuperBall that by government regulation has to carry warnings telling people it’s a risk to young children and you can’t market it to them, yet you can have the same identical shape and size gumball and there are no restrictions or requirements,” said Dr. Gary Smith, director of the Center for Injury Research and Policy at Nationwide Children’s Hospital in Columbus, Ohio, the lead author of the pediatricians’ policy statement on food hazards.

At the same time, the academy is urging manufacturers to redesign some of the most dangerous foods — especially the hot dog, a leading choking hazard. That call has been widely ridiculed on the Internet; many commenters said parents should modify the hot dog themselves — by cutting it. And Janet Riley, president of the National Hot Dog and Sausage Council, said of a redesign, “It’s not going to happen.”

But the food designer Eugene D. Gagliardi Jr., who invented Steak-umms and popcorn chicken, has come up with a new hot dog that is soon to be marketed on the East Coast. It looks the same in the package, but has eight deep slits that open when cooked, causing it to break apart into small pieces when eaten.

The pediatricians’ group began studying the issue nine years ago, when 17 children around the world, including several in the United States, choked to death on a gelatinous candy that had to be sucked out of a plastic cup the size of a coffee creamer. The F.D.A. eventually banned its sale.

“That product should never have come out on the market,” Dr. Smith said. “Children had been dying in Canada, Japan and the U.S. for years, and we hadn’t picked up on it” — until reports of a cluster of deaths in Northern California.

There are no recent nationwide figures on food choking. In 2001, about 17,500 children 14 and younger were treated in emergency departments for choking, and 60 percent of the episodes were caused by food. In 2000, 160 children died from an obstruction of the respiratory tract.

Children under 4 are at the highest risk, not only because their airways are small (the back of a toddler’s throat narrows to the diameter of a straw) but also because of the way their eating abilities develop. Front teeth usually come in at 6 or 7 months — so babies can bite off a piece of food — but the first molars, which grind food down, do not arrive until about 15 months, and second molars around 26 months.

“Between the ages of 3 and 4, they’re developing their ability to chew adequately and prepare for swallowing,” said Dr. Nisha Kapadia, a pediatric resident at Johns Hopkins Children’s Center.

When young children chew foods like peanuts, raw carrots and popcorn, some is ground down and some is not, and they tend to swallow unchewed bits of food that can block the airway or be inhaled into the bronchial tubes and lungs.

The pediatrics group says that while vigilance is important, parents cannot always prevent choking. “I see the parents when they bring their children into the E.R.,” Dr. Smith said. “Virtually every time they say, ‘I can’t believe this happened to my child — I was standing right there.’ ”

Some advocates say the government should put hazardous foods off limits to young children.

“The F.D.A. needs to set a uniform standard for cautionary information on food that should not be consumed by children under 5,” said Bruce Silverglade, legal director of the Center for Science in the Public Interest, an advocacy group that lobbied unsuccessfully in 2003 for a bill to require the Food and Drug Administration to develop food labeling regulations.

In a statement, the agency said it was reviewing the pediatrics academy’s new policy and was considering steps to prevent further deaths, but it declined to elaborate.

Some food manufacturers have voluntarily put warning labels on packages. “Two-thirds of hot dogs already have labels,” said Ms. Riley, of the National Hot Dog and Sausage Council. But Mr. Silverglade said that was not enough.

“Even if up to two-thirds are labeled, it’s shameful that one-third are not,” he said.

Cautionary labeling, when it exists, is not always obvious to consumers. After her daughter died, Ms. Hale went to the supermarket and found that some brands of microwave popcorn had a small warning on the bottom of the box.

“What person reads the bottom of a box?” she asked.

The Hales, who both retired from the Marines after their daughter’s death, sued the popcorn manufacturer for wrongful death and settled out of court. (A confidentiality agreement prevents her from naming the manufacturer.)

In 2003, three years before Allison’s death, Mr. Silverglade’s group sent letters to nearly 100 manufacturers, including popcorn makers, urging them to use standardized clear labeling to caution against choking.

“We received about two responses, and even those companies hadn’t made any promises,” Mr. Silverglade said.

A conversation on the Web site CafeMom.com revealed a wide range of opinions about when a child can safely eat popcorn, with many mothers saying they allowed it for their 15- to 24-month-olds.

“He only eats it when I eat so I can make sure he doesn’t choke,” one mother wrote.

But being present will not necessarily prevent choking. “Although the A.A.P. does not give a specific age cutoff,” Dr. Smith said, “I believe it is prudent to wait until at least 4 to 5 years of age before introducing high-risk foods, including popcorn.”

Toys and other objects are also serious choking hazards, especially coins, balloons and balls. The pediatrics academy is also calling for tighter regulation of products sold on eBay and other online sites and in retail toy bins or vending machines, which are often poorly marked.

The group has also urged its members to do a better job of counseling parents on avoiding high-risk foods.

“Parents often think, ‘My child is mature enough to handle a grape or a hot dog,’ ” said Chrissy Cianflone, director of programs for the advocacy group Safe Kids USA. “Parents need to understand that there are physical and cognitive developmental limitations.”

She and others say keeping small objects and unsafe food out of a child’s mouth is the only way to prevent choking accidents, as Allison Hale’s parents can testify.

“Not a day goes by,” Ms. Hale said, “where my husband doesn’t feel like it’s his fault and he did something wrong.”


State [and Federal] governments becoming too much of a "nanny"?
Posted by Mercury at 11:24 AM

now i know how Babe Ruth probably died....remember the bigger the government the smaller the citizen...just say "No" to the nanny