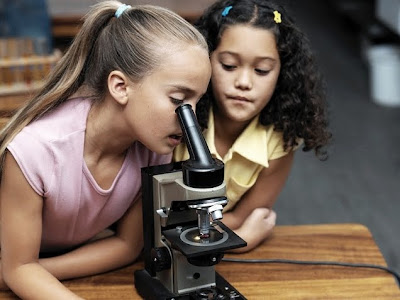 Something new and gender directional from PBS.

The New York Times
Here’s hoping that one of the delightful young ladies on “SciGirls,” a new series under the PBS Kids Go! banner, grows up to be tech-savvy enough that she figures out how to remove annoying animated interlopers from otherwise excellent television programs.

“SciGirls,” hoping to right the vexing science-and-technology imbalance that has left women chronically underrepresented in those fields, shows tweener girls engaged in projects that make physics, math, biology and other subjects seem fun.

And it succeeds admirably, primarily because it uses real kids in all their awkward, giggly glory, not the Stepford-like youths seen in Disney shows. Trouble is, the makers of “SciGirls” seem not to realize just how refreshing and entertaining these ordinary kids are, because they also toss in an irksome animated girl named Izzie, who starts off each episode by chatting with her animated pal Jake and then keeps popping up in the middle of the real-life adventures the real-life girls are having.

Izzie and Jake’s dialogue sounds as if it were written by grown-ups who don’t know anything about tweeners but think they can appeal to them by randomly tossing in words — “Log On!” “Upload!” “Mash-up!” — that they imagine kids to be obsessed with. Fortunately, though, Izzie and Jake’s opening bits don’t last long.

Once the actual human children show up — different ones are featured in each episode — science does indeed seem to be downright enjoyable. In Sunday’s installment, four girls take on the task of building a giant pig puppet for a May Day parade. Because they want blinking eyeballs and other moving parts, the project becomes a lesson in basic physics, as well as in the art of building scale models to test theories. And the end product is a hilarious, pink, fire-breathing success.

A later episode shows four girls determined to increase the turtle population in a pond near their school. By the time they’re done learning about turtles and what attracts them they have been thigh-deep in gross-looking water and come within finger-losing distance of some nasty-looking snapping turtles.

Now if only one of those turtles would take Izzie’s head off, this program would be perfect.

SciGirls
Posted by Mercury at 5:30 AM