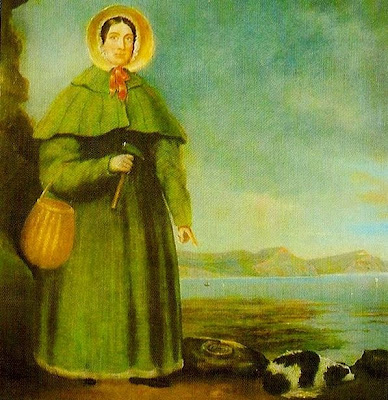 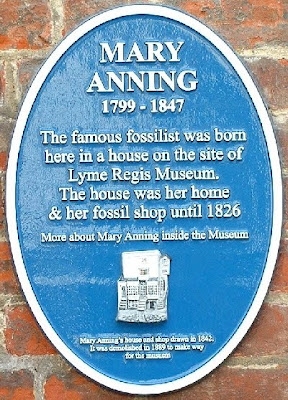 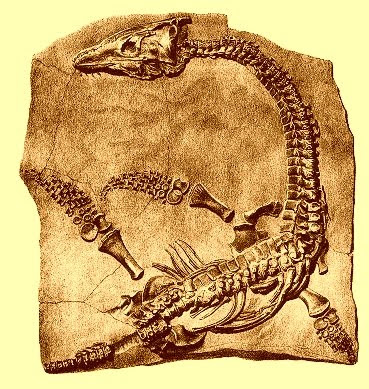 She is credited with the first discovery of an ichthyosaur skeleton and a fantastic collector of Jurassic era marine fossils.

University of California Museum of Paleontology...

Despite the fact that Mary Anning's life has been made the subject of several books and articles, comparatively little is known about her life, and many people are unaware of her contributions to paleontology in its early days as a scientific discipline. How can someone described as 'the greatest fossilist the world ever knew' be so obscure that even many paleontologists are not aware of her contribution? She was a woman in a man's England.

Mary Anning was born in 1799 to Richard and Mary Anning of Lyme Regis, situated on the southern shores of Great Britain. The cliffs at Lyme Regis were -- and still are -- rich in spectacular fossils from the seas of the Jurassic period. Richard and Mary had as many as ten children, but only two of these children, Mary and Joseph, reached maturity. Richard was a cabinetmaker and occasional fossil collector. Unfortunately, Richard died in 1810, leaving his family in debt without a provider. He did, however, pass on his fossil hunting skills to his wife and children, which later proved fortuitous for the fledgling field of paleontology.

The Anning family lived in poverty and anonymity, selling fossils from Lyme Regis, until the early 1820s, when the profesional fossil collector Lt.-Col. Thomas Birch came to know the family and sympathized with their desperate financial situation. Birch decided to hold an auction to sell off all of his fine fossil collection and donate the proceeds to the Anning family. He felt that the Annings should not live in such "considerable difficulty" considering that they have "found almost all the fine things, which have been submitted to scientific investigation...". Up to this point mother Mary was running the business end of fossil collecting. By the middle of the 1820s, daughter Mary had established herself as the keen eye and accomplished anatomist of the family, and began taking charge of the family fossil business. Joseph was, by this time, committed to a career in the upholstery business, and no longer collected fossils.

Mary Anning has been credited with the first discovery of ichthyosaur fossils. Although this is not entirely true, she did help to discover the first specimen of Ichthyosaurus to be known by the scientific community of London. This specimen was probably discovered sometime between 1809 and 1811, when Mary was only 10 to 12 years old. And while Mary did find the majority of the remains, her brother had discovered part of the beast twelve months earlier. In fact, the entire Anning family was involved in fossil hunting, but Mary's skill and dedication produced many remarkable finds and thus provided the fatherless family with a means of income. The fossils that Mary and her family found and prepared were eagerly sought -- not only by museums and scientists, but by European nobles, many of whom had substantial private collections of fossils and other "curiosities."

Mary made many great discoveries, including the aforementioned ichthyosaur and several other fine ichthyosaur skeletons. But perhaps her most important find, from a scientific point of view, was her discovery of the first plesiosaur. The famous French anatomist, Georges Cuvier, doubted the validity of the specimen when he first examined a detailed drawing. Once Cuvier realized that this was a genuine find, the Annings became legitimate and respected fossilists in the eyes of the scientific community.

In spite of this recognition, the majority of Mary's finds ended up in museums and personal collections without credit being given to her as the discoverer of the fossils. As time passed, Mary Anning and her family were forgotten by the scientific community and most historians, due to the lack of appropriate documentation of her special skills. Contributing to the oversight of Mary Anning and her contribution to paleontology was her social status and her gender. Many scientists of the day could not believe that a young woman from such a deprived background could posses the knowledge and skills that she seemed to display. For example, in 1824, Lady Harriet Sivester, the widow of the former Recorder of the City of London, wrote in her diary after visiting Mary Anning:

". . . the extraordinary thing in this young woman is that she has made herself so thoroughly acquainted with the science that the moment she finds any bones she knows to what tribe they belong. She fixes the bones on a frame with cement and then makes drawings and has them engraved. . . It is certainly a wonderful instance of divine favour - that this poor, ignorant girl should be so blessed, for by reading and application she has arrived to that degree of knowledge as to be in the habit of writing and talking with professors and other clever men on the subject, and they all acknowledge that she understands more of the science than anyone else in this kingdom."
Lady Sivester's praise is high, but note that "divine favour" is invoked to explain how such a woman could possibly be so knowledgeable. It is clear, however, that Anning was not only a collector, but was well-versed in the scientific understanding of what she collected, and won the respect of the scientists of her time. Her discoveries were important in reconstructing the world's past and the history of its life. 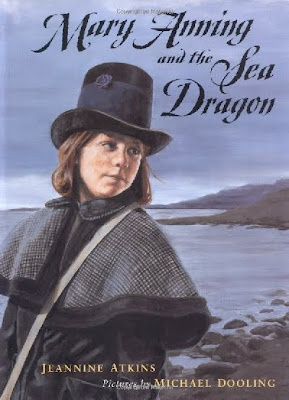 Mary Anning and the Sea Dragon