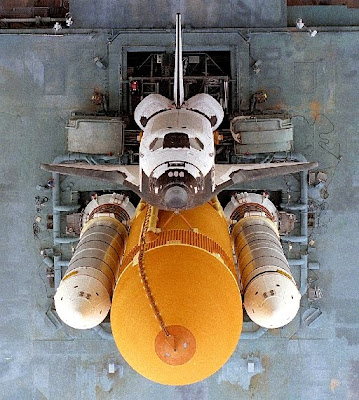 Associated Press
Space shuttle Atlantis is back on Earth, and its flying career is over.

Atlantis and its six-man crew landed at Florida's Kennedy Space Center this morning. It marked the end of Atlantis' 25 years of service. Only two shuttle missions remain, by NASA's two other spaceships. The space agency would like Atlantis to return to the International Space Station next June. But that's not in the cards unless the White House grants a reprieve.

The space station construction mission boosted Atlantis' mileage to just over 120 million miles, accumulated over 32 flights. It was a successful last ride for Atlantis. The shuttle and its astronauts left the outpost bigger and more powerful, adding a new compartment and fresh batteries.

Shuttle Atlantis [Wikipedia]
Posted by Mercury at 6:55 AM