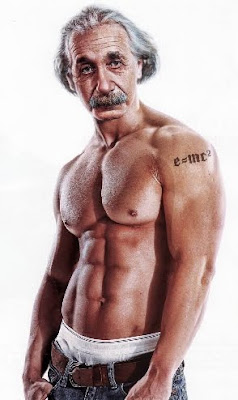 Looks like a situation for lawyers Dewey, Cheatem, and Howe.

Associated Press
Albert Einstein is among the world's top-earning dead people, and an Israeli university that holds rights to his image is asking General Motors Co. to pay for putting the physics pioneer in a magazine ad.

The Detroit automaker grafted the Nobel Prize-winning German scientist's head onto the body of a buff, shirtless man in a Nov. 30 ad in People magazine.

The ad had the slogan "Ideas Are Sexy Too."

On May 19, Hebrew University of Jerusalem filed suit against GM in U.S. District Court for central California. The suit quotes Forbes magazine in 2008 as saying Einstein earned $18 million a year, fourth among deceased celebrities. He died in 1955.

GM spokeswoman Ryndee Carney tells The Detroit News that GM paid for rights to Einstein's image.
Posted by Mercury at 7:21 AM