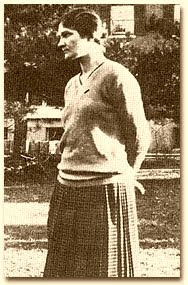 Cecilia Helena Payne-Gaposchkin
May 10th, 1900 to December 7th, 1979
Cecilia Helena Payne-Gaposchkin was an English-born American astronomer who was the first to apply laws of atomic physics to the study of the temperature and density of stellar bodies, and the first to conclude that hydrogen and helium are the two most common elements in the universe. During the 1920s, the accepted explanation of the Sun's composition was a calculation of around 65% iron and 35% hydrogen. At Harvard University, in her doctoral thesis (1925), Payne claimed that the sun's spectrum was consistent with another solution: 99% hydrogen with helium, and just 1% iron. She had difficulty persuading her superiors to take her work seriously. It was another 20 years before Payne's original claim was confirmed, by Fred Hoyle.

Cecilia Helena Payne-Gaposchkin (1900-1979), the first woman to attain a full professorship through a regular faculty promotion at Harvard University, was a pioneer in astrophysics and a leading authority on the brightness of variable stars. Her work was of fundamental importance in the study of stellar atmospheres and the research techniques that she perfected for analyzing starlight photographically were widely used and helped provide astronomers with a better understanding of the composition of stars.

Gaposchkin was born in Wendover, Buckinghamshire, England on May 10, 1900 to Edward Payne and Emma Pertz. Growing up in England, Gaposchkin attended both religious and private grammar schools. In 1919 she entered Newnham College at Cambridge University with the intention of studying botany, physics, and chemistry. However, after listening to a lecture by astrophysicist Arthur Eddington about solar eclispes, she decided to change her academic direction and pursue a career in astronomy. At Newnham College, Gaposchkin attended as many astronomy classes as she could, set up a telescope, and presided over the college's Science Society.

Faced with limited academic opportunities in Great Britain, Gaposchkin decided to attend school in the United States and applied for a fellowship to do research at the Harvard College Observatory in 1923. She became one of the first students in Harvard's new graduate program in astronomy. Gaposchkin continued her studies of variable stars as the first PhD student in astronomy at Radcliffe College in 1924. Gaposchkin's research work at Radcliffe involved the analysis of Harvard University's immense collection of spectra photographs, a collection consisting of tens of thousands of images. Her findings, published in her work entitled Stellar Atmospheres, A Contribution to the Observational Study of High Temperature in the Reversing Layers of Stars, determined stellar temperatures and established that stars were made up of hydrogen and helium with traces of other elements.

Upon graduation, Gaposchkin continued her work at Harvard as an astronomer pursuing her studies of the stars and the structure of the Milky Way Galaxy. In collaboration with her husband, Sergei, a Russian astronomer émigré working at the observatory, Gaposchkin undertook the systematic investigation of all known variable stars brighter than the tenth magnitude and published her results in 1938. Her work, Variable Stars, became the standard reference in the field. During the 1930's and 1940's, both Cecilia and Sergei, together with 29 assistants in the Observatory, made more than 1,250,000 observations of variable stars and laid the groundwork for all subsequent work on them and their use as indicators of the structure of the galaxy. Finally, in the 1960's, the Gaposchkins made more than two million photographic estimates of the stars in the two satellite galaxies of the Milky Way Galaxy, the Magellanic Clouds.

Gaposchkin entered Harvard's academic community when opportunities for women in the field of astronomy were limited. Despite her discoveries, she lacked the recognition afforded her male counterparts and received a smaller salary. In addition to her scientific work, she edited the volumes published by the Harvard Observatory and papers submitted by the staff to outside journals. She also taught a series of astronomy lecture courses. It was not until 1938 that she received a permanent appointment to the Harvard staff; in 1956 she finally received a full professorship. That same year she became chair of the Astronomy Department, the first woman to chair a department at Harvard University. She retired from active teaching in 1966. 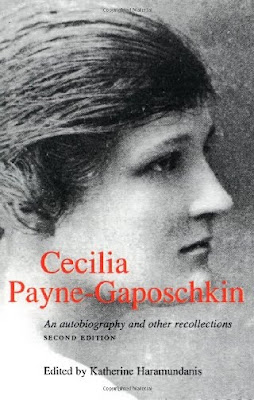 Cecilia Payne-Gaposchkin: An Autobiography and Other Recollections