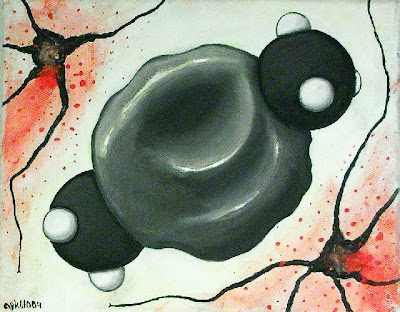 Chemical & Engineering News
Some artists focus on landscapes or the human form, but Kobulnicky has chosen MOLECULAR MODELS as the subject of his paintings.... "I think that molecular models have a unique aesthetic appeal," he tells Newscripts. "In each molecule, the brightly colored spheres align into shapes that are meaningful on a microscopic level—these are scientific diagrams, after all—but also represent whole realms of everyday experience. To a much greater extent than people commonly realize, greenness, growth, and plant life in general are just chlorophyll. The multiple layers of symbolism inherent in molecular models make them an ideal subject for art."

In Kobulnicky's paintings, the molecules "are rendered as space-filling models in a natural, low-energy conformation and displayed from an angle that shows off as much of their structure as possible," the artist notes. They have rich backgrounds that reflect each compound. For example, "heme is a constituent of blood, so the heme molecule is ringed by surrealistic blood vessels, while the endorphin peptide leu-enkephalin is featured alongside the translucent green orbs that any video-game player will recognize as a health bonus," he says.

"In many cases, I'm helped by the shape of the molecular model," Kobulnicky continues. "The alkyl tail of chlorophyll is shaped like a trellis, so I paired it with a climbing vine. And it is almost too convenient that the illicit drug THC, found in marijuana, is shaped like a hookah or bong."

Even though he's always on the lookout for complex molecules to paint, he has found that some compounds don't lend themselves to his technique. "Morphine, consisting of two sets of interlocking, perpendicular rings, looks like an inchoate blob from every angle, and I've had to abort more than a few attempts to sketch it out," he confesses. "More ambitiously, vitamin B-12, which is an icon of medicine and nutrition and a landmark in the history of synthetic chemistry, has a uniquely frustrating shape that simply won't lie flat."

Kobulnicky says he has been interested in chemistry since his elementary school days, when he built molecules out of plasticine and toothpicks. He did a short stint as a chemistry student in college, but after spilling a beaker of nitric acid on his hand, Kobulnicky says he "decided to leave applied chemistry to more adroit students." He took a degree in philosophy instead.

"I think my focus on painting, which I started doing a few years after I bowed out of laboratory work, has the same spirit of inquiry into the fundamental elements of existence—with less risk of injury," Kobulnicky says. "My absentminded work habits still find their outlet, though, in the fact that every article of clothing, upholstery, and carpet I own is covered in smears of indelible acrylic paint. Whenever I look at my shirts, speckled with mars black and titanium white, I can imagine that in another life, I might have been speckled with caustic reagents by now."

Alexander Kobulnicky
Posted by Mercury at 6:45 AM