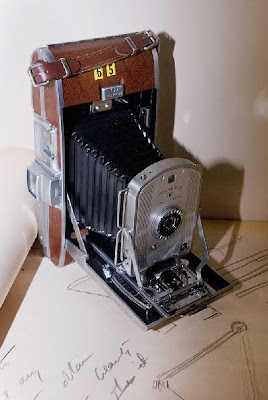 The First Polaroid Model 95A Camera

Almost everyone’s heard the story of how Polaroid instant film cameras were born. For nearly a decade before it would create cameras, Polaroid manufactured eyewear, film and plastics. In 1944, Land’s daughter reportedly asked him, “Why can’t I see the picture now?” That question prompted the invention of instant film cameras. Production of the first Model 95 cameras started in 1948. The initial Polaroid Model 95 cameras used roll film. The film was joined to the print paper that had small packets of a developing agent placed on it. The two were connected using a leader, which, when pulled, triggered the developing agent. That coated the print paper and processed the film, which was ready after a minute or so. The film developed inside the camera and spit it out once it was ready. You’d then peel the final 3 ¼ x 4 ¼-inch print off from the negative. The first Land camera Model 95 went on sale in 1948. 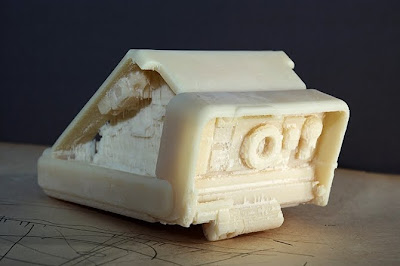 Modeling the camera before it is born

Polaroid modeled everything: Every prototype, every accessory and every product, says Douglas. The company used wood, foam, plastic, cardboard and even wax to work out the design of its new cameras. The wax model above labeled the “SX-NEW, Matrix Modules, 2003” is an example of a model for what was likely to become a new iteration of the famous SX-70 series, says Douglas. 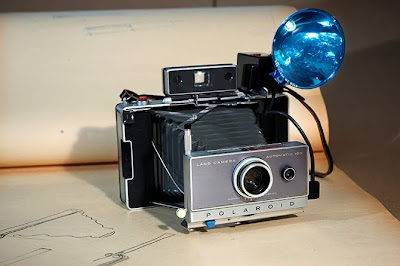 The first model in the series was the Automatic 100 that offered features such as automatic exposure and an electronic shutter, which was seen as the first in a mass-produced camera. The camera had a separate window view and rangefinder assembly that would flip up for use or fold down and fit inside the camera’s cover. The Automatic 100 was also the first in the series of folding cameras using 3 x 4-inch peel-apart pack film. The camera offered settings for film speeds of 75, 150, 300 and 3000 ASA. The Automatic 100, which retailed for $165, was produced for three years, from 1963 to 1966, before being replaced by the Automatic 250. 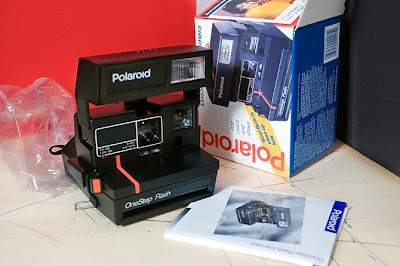 Polaroid Is OneStep Ahead

An instant-print film camera from the SX-70 series, the OneStep debuted in 1976. In two years, the company released three versions of the camera. The first OneStep was a black-and-white fixed-focus camera that sold for $40. A new model that launched a year later offered features such as flash and better focus. The third camera in that line was the Sonar OneStep, an autofocus SLR. An interesting factoid about the OneStep camera is that the battery was in every film pack and not the camera. The OneSteps used a flash bar with 10 flashes per bar, or just enough for one pack of film. They also had programmed auto exposure with +/- half stop trim control. In January 2010, Polaroid announced plans to offer a completely redesigned, modern version of the Polaroid OneStep camera, the PIC 1000. The new PIC 1000 will still use the classic Polaroid Color 600 instant film to produce the iconic white border pictures. 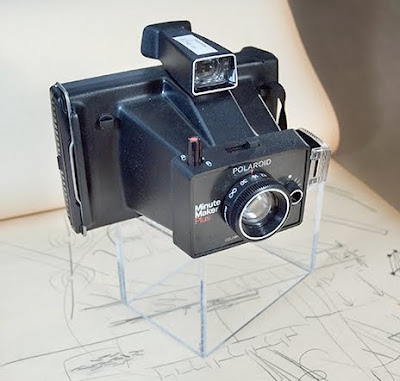 MinuteMaker Plus Lives a Short Life

The MinuteMaker Plus, a camera that sounds more like a kitchen appliance than a photography equipment, was available for just a year. The camera was released in 1977 and was notable because it could use either a standard rectangular format or square format pack films. The camera’s features included a viewfinder that could automatically adjust to the proper format depending on the pack size inserted, an adjustable focus with distance scale on a lens ring and built-in flashcube socket. The flash cube automatically rotated after each exposure. The original retail price on the camera was $32.

Wired
Polaroid has one of the world’s most iconic brands: The self-developing snapshots, with their classic white borders, are nearly as recognizable as the red Coca-Cola logo, the Campbell’s soup can or the Burberry plaid.

But Polaroid’s fortunes have waned. The company, which was founded in 1937, has declared bankruptcy twice and was sold to two different buyers. Its assets have long been dispersed, and its factories were shut down. Polaroid even announced in 2008 that it would stop making its instant film, prompting some enthusiasts to create their own Polaroid-compatible film packs.

Now a company called PLR IP Holdings has rights to the Polaroid brand and has said it will revive some iconic Polaroid cameras. The company recently introduced a new camera, the Polaroid PIC-300.

The archive has some fascinating objects. There are boxes of rare Polarized glasses dating from the 1939 World’s Fair, original newsprint sketches by Polaroid founder Edwin Land, a historic bellows camera the size of a filing cabinet and the SX-70 cameras that defined the instant-photography era.

“For anyone interested in science, technology, art or consumer culture, this is an unprecedented opportunity to look at a series of products and watch their design unfold from every aspect,” says Deborah Douglas, curator of the collection at the MIT Museum.

Polaroid is unusual among American companies in that it has extensively documented its products and maintained archives of its work, says Douglas.

“This is one of the top five company collections out there, along with IBM, Bell Labs, DuPont and Boeing,” she says.

It's back...instant Polaroid photos
Posted by Mercury at 2:08 PM