A pleasant life experience near death 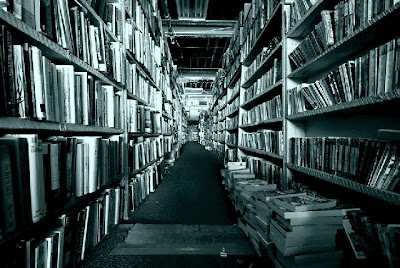 The Caravan Book Store in Los Angeles is not unique and the event is happening everywhere. In my city there is only one used book store now. The pleasure of the encounter is disappearing forever.

Los Angeles Times
It might be hard to imagine, but there was once a "book row" in downtown Los Angeles.

Today, the Caravan Book Store may be all that remains of the row, which extended along 6th Street from Hill to Figueroa streets. The owner, Leonard Bernstein, said when his father opened the store in the 1950s, it was still the era of street cars and downtown department stores.

Most of "book row" disappeared in the 1960s, he told blogdowntown's Ed Fuentes, during downtown's retail decline and first wave of redevelopment.

But Bernstein said he hoped downtown's revitalization might bring new bookstores into the city core.

"I welcome the other independent bookstores," he says. "There's room for more of them. A community of bookstores is better than one...or none."

"This is my world here, where I feel comfortable," he added. "I plan to stay."