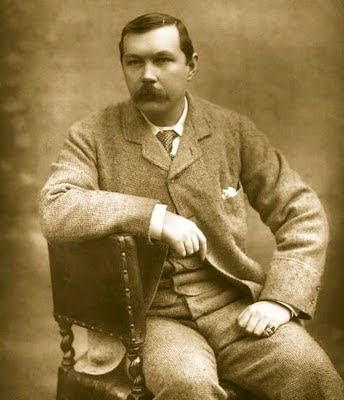 "It is a capital mistake to theorize before one has data. Insensibly one begins to twist facts to suit theories, instead of theories to suit facts."--Sir Arthur Conan Doyle
Everyone knows who Sir Arthur Conan Doyle was...yes, the creator of the super sleuth Sherlock Holmes. And he was an exceptional writer of adventure and science fiction too. But Doyle was also a part of popular spiritualism of the era and succumbed to the pseudo authenticity of the Cottington Fairies.

Arthur Conon Doyle not only accepted these photos as genuine, he even wrote two pamphlets and a book attesting the genuineness of these photos, and including much additional fairy lore. His book, The Coming of the Fairies, is still in print, and some people still believe the photos are authentic. Doyle's books make very interesting reading even today. Doyle's belief in spiritualism, convinced many people that the creator of Sherlock Holmes was not as bright as his fictional creation.

Some thought Conan Doyle crazy, but he defended the reality of fairies with all the evidence he could gather. He counters the arguments of the disbelievers eloquently and at great length. In fact, his evidence and arguments sound surprisingly similar in every respect to those of present-day books touting the idea that alien beings visit us in UFOs.

"Modern" spiritualism began in the United States in the mid 19th century. Specifically, it arose in Western New York state, a region known to social historians for the religious fervor which made it a spawning ground for many religious sects. They refer to it as the "infected district" or the "burned over district." Spiritualism was born in the fertile religious fervor of immigrant Swedenborgians, Mesmerists, and other religions, a climate of thought receptive to spiritualist ideas.

Mainstream religions promised eternal life, but in an era of emerging science which demanded verifiable physical evidence, many religious persons wished for tangible evidence of the claims of relgion, particularly of claims of an afterlife.

Such apparent evidence appeared in Hydesville, New York, in 1848, in a modest frame house which had a reputation of being haunted. Here occured the event which launched the movement known as "modern spiritualism" to distinguish it from earlier historical beliefs about an afterlife.

The Fox family had three teenage daughters who claimed to hear strange rapping noises at night. The girls thought a ghost might be producing the noises, so they tried to respond by clapping their hands. They soon evolved a code for communicating with the ghost of a peddler who had long ago visited the house and had been murdered there. A skeleton later found in the basement seemed to confirm this. Naturally this attracted much local attention.

The Fox girls were instant celebrities. They demonstrated their communication with the spirit by using taps and knocks, automatic writing, and later even voice communication, as the spirit took control of one of the girls.

Soon others, now known as mediums, imitated this and began communicating with the dead, charging for their services, or accepting donations. Seances were conducted in dark or semi-dark rooms with participants seated around a table. Sometimes the table would lean and tilt, participants (sitters) might feel a cold breeze on their faces, fresh flowers (even out of season) sometimes materialized out of thin air and appeared upon the table. Musical instruments played mysteriously. The medium sometimes spoke, under control of a spirit, relaying meassages from the dear departed. Other methods of spirit communication included writing on sealed slates, impressing images onto photographic plates which had been kept in sealed enclosures, and painted images which gradually appeared upon previously blank canvas.

Skeptics suspected this was nothing but clever deception and fraud. Nonetheless, belief in the ability to communicate with the dead grew rapidly, becoming an organized religion called Spiritualism. Spiritualism flourished well into the 20th century, and still exists today.

Suspicions that the seance-room phenomena were fraudulent were reinforced when Margaret Fox confessed to deception. On October 21, 1888, Margaret appeared before an audience of 2000 to demonstrate how she had fraudulently produced the spirit raps. In her stocking feet, on a small pine platform six inches above the floor, Margaret produced raps audible throughout the theater by cracking her toe-joints! Doctors from the audience came on stage to verify the source of the sound.

Margaret confessed that she and her sister used this and other methods to produce the raps. Sometimes they used an apple on a string, bouncing it on the floor out of sight behind the furniture. Her confession showed that the entire spiritualism movement was founded on fraudulent events.

The idea of claiming that unseen "rappings" can be produced with joints of the feet! If she says this, even with regard to her own manifestations, she lies! I and many other men of truth and position have witnessed the manifestations of herself and her sisters many times under circumstances in which it was absolutely impossible for there to have been the least fraud.
Margaret wrote a signed story that appeared in The New York World, Oct. 21, 1888. She said:

Spiritualism is a fraud and a deception. It is a branch of legerdemain, but it has to be closely studied to gain perfection.
One of those who would not accept Margaret's confession was Sir Arthur Conan Doyle, the creator of the fictional Sherlock Holmes and a convinced believer in spiritualism. He responded:

Nothing that she could say in that regard would in the least change my opinion, nor would it that of any one else who had become profoundly convinced that there is an occult influence connecting us with an invisible world.
The magician Harry Houdini, a showman continually alert to opportunities for self-promotion, publicly exposed mediumistic trickery in his stage shows and wrote pamphlets opposing fraudulent mediums. In spite of this, some spiritualists claimed that Houdini had genuine spiritualistic powers, refusing to accept Houdini's own statements that only deception was involved in his performances.

Arthur Conan Doyle devoted a whole chapter of his book The Edge of the Unknown to a detailed argument that Houdini had genuine psychic power, but wouldn't admit it. Curiously, Doyle and Houdini remained friends for a long while, in spite of public clashes over spiritualism. Perhaps they shared an appreciation of the value of public self-promotion. Eventually Houdini became outraged as a result of a seance in which Mrs. Doyle claimed to have communicated with Houdini's mother, and the details she reported were obviously wrong.

Doyle was a credulous dupe for various kinds of nonsense. He not only believed in spiritualism and all of the phenomena of the seance room, but he also believed in fairies.

In 1917, two teenage girls in Yorkshire produced photographs they had taken of fairies in their garden. Elsie Wright (age 16) and her cousin Frances Griffiths (age 10) used a simple camera and were said to be lacking any knowledge of photography or photographic trickery. 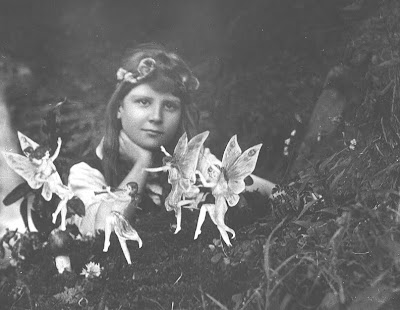 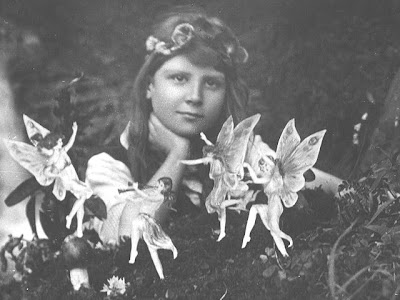 Taken in July, showed Frances in the garden with a waterfall in the backround and a bush in the foreground. Four fairies are dancing upon the bush. Three have wings and one is playing a long flute-like instrument. Frances is not looking at the fairies just in front of her, but seems to be posing for the camera. Though the waterfall is blurred, indicating a slow shutter speed, the fairies, are not blurred, even though leaping in the air. 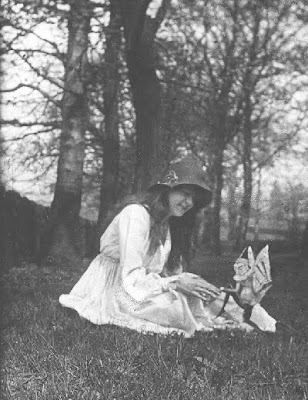 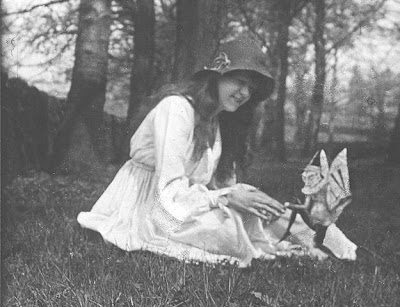 Taken in September, showed Elsie sitting on the lawn reaching out her hand to a friendly gnome (about a foot high, with wings) who is stepping forward onto the hem of her wide skirt. 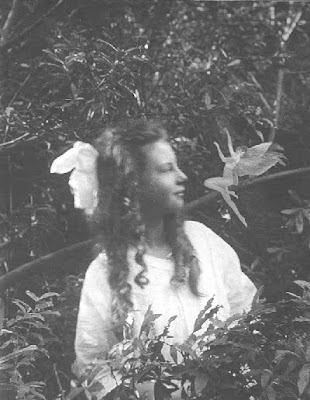 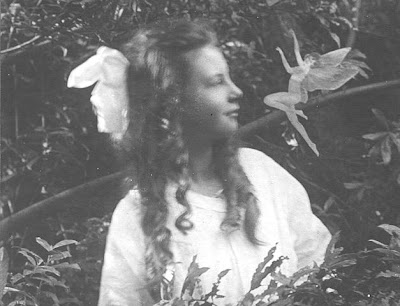 "Francis and the Leaping Fairy" showed a slightly blurred profile of Frances with the winged fairy suspended in mid-air just in front of her nose. The background and the fairy are not blurred. 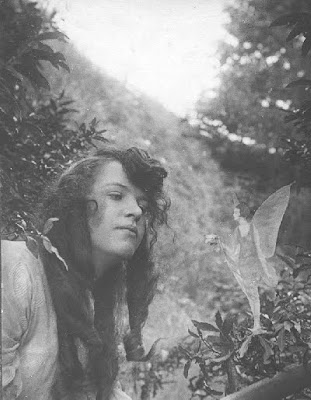 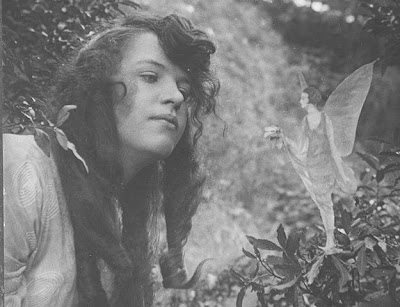 A fairy hovering in mid-air offering a flower to Elsie. 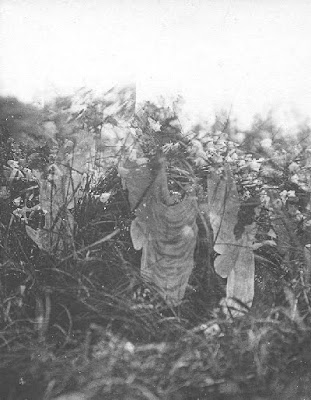 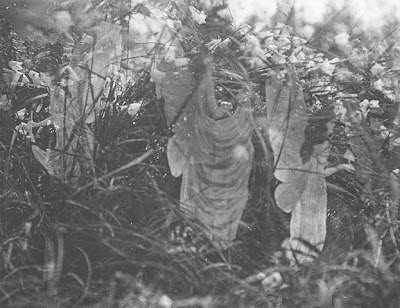 "Fairies and their Sunbath" is the only one that looks as if it could have been an accidental or deliberate double exposure.
Over the years the mystery persisted. Only a few die-hards now believe the photos were of real fairies, but the mystery of the details of how (and why) they were made continued to fascinate serious students of hoaxes, frauds and deceptions. When the girls (as adults) were interviewed, their responses were evasive. In a BBC broadcast interview in 1975 Elsie said: "I've told you that they're photographs of figments of our imagination and that's what I'm sticking to."

In 1977 Fred Gettings stumbled on important evidence while working on a study of early nineteenth-century book illustrations. He found drawings by Claude A. Shepperson in a 1915 children's book which the girls could easily have posessed, and which were, without a doubt, the models for the fairies which appeared in the photos. Illustration for Alfred Noyes' poem "A Spell for a Fairy" in Princess Mary's Gift Book by Claude Shepperson. (Hodder and Stoughton, no date, c. 1914, p. 101ff). Compare the poses of these figures with those of three of the fairies in Photo No. 1. The figures have been rearranged and details of dress have been altered, but the origin of the poses is unmistakable.
A curious fact is that in this book, a compilation of short stories and poems for children by various authors, there's a story, "Bimbashi Joyce" by Arthur Conan Doyle! Surely he received a copy from the publisher. If Doyle had noticed this picture, and if he had the sort of perceptiveness he attributed to Sherlock Holmes, he might have concluded that the Cottingley photographs were fakes. But, maybe not. Believers are good at seeing what they believe, and not seing things that challenge their beliefs. Or perhaps the close match of drawing and photos is a supernatural psychic coincidence.

Elsie and Frances and Mr. Hodson were still living in 1977, and continued to stick to their story, affirming the genuineness of the fairies and the photos. Then, in 1982 the girls admitted, in interviews with Joe Cooper, that they had faked the first four of the photos.

As many had suspected all along, the girls had used paper cutouts of fairy drawings. No great photographic skills were required, though the photos do show good artistic composition. Elsie had artistic skill, and had even worked for a few months in a photographer's shop retouching photographs. But the girls probably did no retouching on these photos. The simplest of means, just cut-out drawings of fairies stuck on the shrubbery, was all that was required to dupe gullible and predisposed minds like those of Arthur Conan Doyle, Geoffrey Hodson, and Edward Gardner. Many of the copies of these photos which have been circulated have been suspected of having been "improved" by retouching. This certainly may be true of the photos being prepared for publication in books, the desire being for the clearest possible result on the printed page. However, those who say the pictures are "too good" to have been taken by teenage amateur photographers, are showing an unwarranted prejudice, not consistent with the facts revealed by analysis of the original photos. Some have claimed to see a slight "blurring" of the fairy images, when, in fact, the fairies are more sharply defined than the girl's images.

On the matter of Conan Doyle's gullibility, Gilbert Chesterton said...it has long seemed to me that Sir Arthur's mentality is much more that of Watson than it is of Holmes.