Polar bears losing in the game of life? 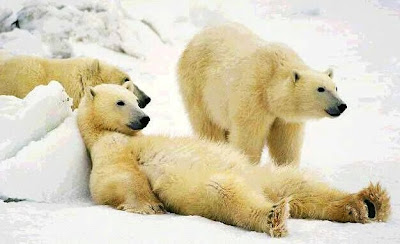 BBC
Climate change will trigger a dramatic and sudden decline in the number of polar bears, a new study has concluded.

The research is the first to directly model how changing climate will affect polar bear reproduction and survival.

Based on what is known of polar bear physiology, behaviour and ecology, it predicts pregnancy rates will fall and fewer bears will survive fasting during longer ice-free seasons.

These changes will happen suddenly as bears pass a 'tipping point'.

Details of the research are published in the journal Biological Conservation.

Until now, most studies measuring polar bear survival have relied on a method called "mark and recapture".

This involves repeatedly catching polar bears in a population over several years, which is cost and time-intensive.

Because of that, the information scientists have gathered on polar bear populations varies greatly: for example, datasets span up to four decades in the best studied populations in Western Hudson Bay and Southern Beaufort Sea, but are almost non-existent for bears in some parts of Russia.

Even more difficult is measuring how survival and reproduction might change under future climatic conditions.

However, these projections are essentially educated guesses, based on experts judging or extrapolating how current population trends might continue as the climate changes.

"So we've looked at the underlying mechanisms of polar bear ecology to assist our understanding of what will happen in a warming world," Dr Molnar told the BBC.

Dr Molnar, Professor Andrew Derocher and colleagues from the University of Alberta and York University, Toronto focused on the physiology, behaviour and ecology of polar bears, and how these might change as temperatures increase.

"We developed a model for the mating ecology of polar bears. The model estimates how many females in a population will be able to find a mate during the mating season, and thus get impregnated."

Male polar bears find females by wandering the ice, sniffing bear tracks they come across. If the tracks have been made by a female in mating condition, the male follows the tracks to her.

The researchers modelled how this behaviour would change as warming temperatures fragment sea ice.

They also modelled the impact on the bears' survival.

As these ice-free seasons lengthen, fewer bears are expected to have enough fat and protein stores to survive the fast.

By developing a physiological model that estimates how fast a bear uses up its fat and protein stores, the researchers could estimate how long it takes a bear to die of starvation.

"In both cases, the expected changes in reproduction and survival were non-linear," explains Dr Molnar.

The US Endangered Species Act lists the polar bear as "Threatened".

The latest US assessment of the conservation status of polar bears included the only two previous studies to assess the impact of climate change, but these extrapolated population trends, rather than directly modelling how the ecology of polar bears may alter.

The new study by Dr Molnar's team offers a way to improve these predictions, and suggests the potential for even faster declines than those found by the US assessment.

"Our view is that the Canadian assessment should be redone, properly accounting for climate change effects.

"The status of polar bears is likely much more dire than suggested by the Canadian report," he adds.

"For instance, for a while we will only see small changes in summer fasting season survival in Western Hudson Bay.

"[But] eventually mortality will dramatically increase when a certain threshold is passed; for example, while starvation mortality is currently negligible, up to one-half of the male population would starve if the fasting season in Western Hudson Bay was extended from currently four to about six months."
Posted by Mercury at 6:45 AM