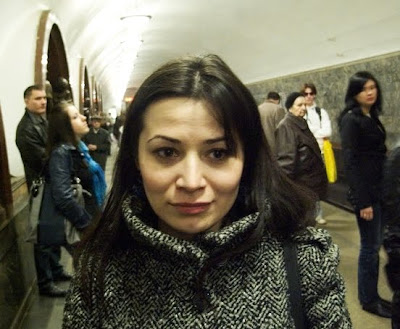 Can a case be made for profiling...now to include "gender"?

"After Attacks in Russia, Fears of Xenophobia"

The New York Times
Lilya Paizulayeva descended into the subway anxiously, trying to keep her distance from the crowds and the newly deployed and heavily armed police officers. She cringed at the train’s loud metallic shriek, pressing herself to the wall.

She was not scared of suicide bombers — she feared being taken for one herself.

With her jet-black hair and large dark eyes, Ms. Paizulayeva, a 26-year-old native of Chechnya, looks very much the daughter of Russia’s fiery North Caucasus region, from where, investigators say, two young women traveled to Moscow to blow themselves up last week in the rush-hour throngs, killing at least 40 people.

While for many the attacks are an unsettling reminder of the female suicide bombers who have terrorized this city for years, women from the Caucasus, particularly from Chechnya, say they worry about the return of the arbitrary arrests, xenophobic attacks and open hostility that many experienced after similar terrorist attacks in the past.

“Psychologically, I feel a kind of alarm inside,” said Ms. Paizulayeva, who was born in Chechnya’s capital, Grozny, and fled to Moscow in 1995 with her family when the war there started. “Though I’m dressed like a local, I think that perhaps someone could attack me in the metro,” she said. “This whole week I have felt like a stranger in this city.”

Though Russian citizens, Chechens and others from the North Caucasus are often seen as foreigners in Russia, especially here in the capital, and are frequently associated with immigrants from the countries of Central Asia that were former Soviet republics. More than 1,000 miles from Moscow, Chechnya has its own language, religion and customs, as well as a history of violent separatism that many in the rest of the country find alien in the best of times and threatening in the worst.

There have already been several reports of revenge attacks against people from the Caucasus in the wake of the bombings. Last week a brawl broke out on a subway train when a group of passengers insisted on inspecting the bags of several people who appeared to be from the Caucasus, according to the Sova Center, an organization that tracks xenophobic violence.

Attacks against people with darker skin and hair typical of those from the Caucasus are not uncommon in Russia.

But it is the women, particularly Chechen women, who are frequently associated with suicide attacks. Female suicide bombers, most often from Chechnya, have been responsible for some of the deadliest attacks in Russia in the last decade. These so-called Black Widows have carried out at least 16 bombings, killing hundreds.

The police have identified Dzhanet Abdullayeva, a 17-year-old woman from Dagestan, a region bordering Chechnya, as one of the suicide bombers responsible for last week’s attack in Moscow. Investigators suspect that another woman, possibly from Chechnya, was the second bomber.

Like these women, Ms. Paizulayeva has experienced the horror and loss of war, but there the similarities end. With her bright-red nail polish, tight jeans and high boots, only her dark hair and eyes distinguish her from the many fair, blue-eyed women rushing through the ornate Revolution Square subway station on a recent day. A journalism student at a prestigious Moscow university, Ms. Paizulayeva said she now considered Moscow to be her hometown.

Nevertheless, she said, she notices the nervous stares when she enters a bus or train. A year ago, a man yelled “Chechen!” and grabbed her by the throat as she was walking through the subway. She was able to wrestle free.

Even some acquaintances from her university, she said, treat her “with caution.”

“When these incidents occur,” she said, “you feel a coldness.”

Russia’s leaders appear to be trying to play down the ethnic element of the attacks. Last week, President Dmitri A. Medvedev admonished journalists and officials for referring to people from the Caucasus as if they were foreigners.

“This is not a foreign province; this is our country,” Mr. Medvedev said at a meeting in Dagestan. “A huge number of people live here, the majority of which are normal, honest, decent people.”

The president’s entreaties, however, have not stopped lower-ranking officials from calling for stricter security measures directly focusing on people from the Caucasus. Since the attacks, there have been renewed calls to carry out a plan proposed by Russia’s top investigator early last month to collect DNA samples and fingerprints from every person from the region.

Several people who track xenophobic violence in Russia said the recent bombings had yet to provoke the surge in anti-Chechen sentiment that often accompanied previous attacks, in the years when they occurred more frequently.

“This is different now than we have seen,” said Svetlana Gannushkina, the director of Civil Assistance, a national human rights group.

“I don’t see people alarmed like they were,” Ms. Gannushkina said, adding, “But we still don’t know what will happen.”

Still, even before the recent bombings, Chechens had difficulties escaping the stigma attached to their homeland after so many years of violence and vilification.

Even those who do not look particularly Chechen, like Alshna, a 36-year-old Chechen woman who refused to give her last name, said they carried that stigma around with them in their passports, which indicate their place of birth.

One look at that passport has been enough to deny housing, employment and medical care, said Alshna, who has lived in Moscow for 15 years. The principal of a local school refused to register Alshna’s daughter, saying she feared that Alshna would “come and blow it up.”

“Here, after every other step the police stop you and insult you,” Alshna said. “Even if they are decent people, they are still scared of us.”
Posted by Mercury at 7:10 AM

give me a break...after 4 wives...being raised by sisters....you do not think i know Attila the Hun had a mother....that should have been the first clue