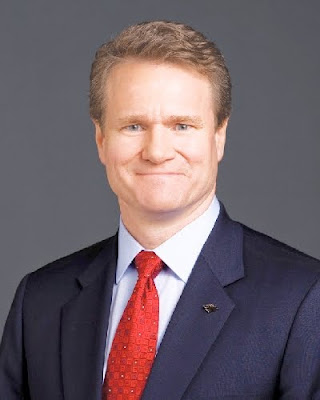 Now do you really believe that BOA is customer friendly and adopting a new set of ethics? Just keep you eye on the back door for they will find some creative way of making even more money.

USA TODAY
In his first 100 days on the job, Bank of America CEO Brian Moynihan has won over analysts, surprised consumer advocates and angered politicians.

His encyclopedic knowledge of the bank has earned him the respect of prominent analysts such as Dick Bove, who once questioned whether Moynihan was the right choice to steer BofA through unprecedented industry and economic turmoil.

His rollback of aggressive bank fees has elicited shock — and applause — from consumer groups who had long blasted such fees but become accustomed to the industry doing little about them.

And his unwillingness to demonize the bank's controversial acquisition of Merrill Lynch has irked critics pressing for answers about the deal.

It's all in a day's — well 116 days, to be exact — work for Moynihan, a fiercely competitive, sometimes fast-talking executive who took the bank's helm shortly after it repaid $45 billion in government TARP funds and its former CEO Ken Lewis retired amid outcry about the Merrill deal.

The new CEO says he's aware his challenges are only beginning.

"When you're in the middle of a very difficult time, what you need to do is pretty obvious," says Moynihan, a boyish-looking 50, in an interview at his office on the 58th floor of BofA's Charlotte headquarters. "The harder part of success is in calmer times. You have to be more disciplined, more focused."

Part of the challenge for Moynihan going forward will be streamlining the operations of Merrill and mortgage lender Countrywide, two prominent casualties of the financial fallout that have been absorbed into BofA. Another will be improving the health of the bank's business lines, even as regulatory measures threaten to crimp the company's earnings.

But perhaps the bank's most daunting task will be to regain the public's trust after the implosion of Wall Street-created exotic instruments that helped plunge the nation into recession, gutting Lehman Bros. and bringing other competitors close to collapse.

For now, BofA's latest financial results are a welcome sign that normalcy might be returning. In the first quarter, BofA returned to profitability with $3.2 billion in net income, easily surpassing analysts' expectations. A record $7 billion in trading revenue — helped by the Merrill Lynch acquisition — bolstered the company's results. Overall, BofA made money on all its major business lines except home loans.

Moynihan believes that by expanding customers' ties to the bank, BofA will be able to ramp up its profits as the economy recovers.

"Last year was a year ... to get through the recession," says Moynihan. "This is a year that we're moving forward."

Terry Murray, the former FleetBoston chairman who gave Moynihan his first banking position in the 1990s, believes the new CEO has taken an important step in getting the company back on track: "He's settled the troops."

Moynihan grew up as the sixth of eight children in an Irish-Catholic family in Marietta, Ohio, an enclave of about 15,000 nestled in the Appalachian foothills.

Having seven siblings, Moynihan says, gave him a "unique background in understanding what competition is," a lesson he's been able to apply as he climbs the corporate ladder. Moynihan also learned he had to talk quickly to get his point across, a habit he's found hard to shake as a corporate executive.

Even as a young boy, he was "very serious," recalls Carolyn Armor, his third grade teacher at St. Mary Catholic Elementary School in Marietta.

He was also very determined. "A lot of the kids towered over him, but that didn't deter him one iota. He tried all the sports," says Armor, who recently wrote a letter to the CEO saying she always knew he'd do great things.

Moynihan's love of sports continued through middle school and high school, where he participated in track and football. While he wasn't a star athlete, he understood the game, was coachable and played aggressively, said Rich Hahn, his football coach at Marietta High School.

He was also known to family and friends as a problem solver.

Former classmate Bill Stacy says that when they were growing up, Moynihan always found time to help him with his algebra, geometry and calculus homework.

"I remember going down to the basement and calling him late on my black rotary phone," says Stacy, 51, now the president of Biomedical Solutions, a Stafford, Texas, provider of laboratory equipment. "He would explain the (math) problem two or three times. If I didn't get it, he would pause, then come at it from a different angle."

In high school, Moynihan also seemed more comfortable in his own skin than many of his peers. Stacy remembers a school talent show where he dressed up as Kiss rock band singer Gene Simmons and Moynihan took on the role of guitarist Ace Frehley, donning heavy makeup, glitter and 5-inch wooden heels glued to the bottom of his sneakers.

"You've got to have pretty good self-esteem to do that," says Stacy.

Moynihan's self-confidence — along with a healthy disregard for his appearance — have endured through the years.

As a young lawyer fresh out of Notre Dame law school, Moynihan would come into work "looking like he'd been mugged," with cuts over his eyes from a rugby game the night before, says James J. Skeffington, a partner at Edwards Angell Palmer & Dodge law firm in Providence. Yet, while he played hard, he'd also work longer hours than many of his colleagues, Skeffington says .

As a bank executive, Moynihan has been known to attend meetings with colleagues or analysts looking rumpled and tousled, a stark contrast to his predecessor, Lewis, who was known for being impeccably dressed.

Moynihan "doesn't care about his appearance, that his tie is askew, his hair is on fire," says Nancy Bush, head of NAB Research. "He cares about what he does at the meeting."

The new CEO "knows his stuff soup to nuts, and expects you to know your stuff also," says Anne Finucane, BofA's global strategy and marketing officer, who has worked with Moynihan for about 15 years.

"His strength is his great ability to focus," agrees Bush. "His weakness is sometimes his public presentation, because he thinks a lot faster than he can talk."

Analysts say this weakness came out during a recent congressional hearing, when Moynihan was grilled about BofA's purchase of Merrill Lynch — and his answers were seen as somewhat evasive. (He was BofA's general counsel when the deal closed.)

For his part, Moynihan points to the improvement in the bank's earnings as a sign of the deal's merits.

"I think that people, when they look at the idea of Bank of America and Merrill merging, they couldn't get that (the deal) could work," says Moynihan. "If people look at the objective facts now, from how we're actually performing, this has been a strong success."

Nevertheless, the merger has been the subject of regulatory scrutiny and shareholder lawsuits related to BofA's disclosure of Merrill's financial losses and employee bonuses. Public outrage about the transaction — along with concern about government bailouts of banks blamed in part for precipitating the financial crisis — have fueled discussions in Congress about how to rein in the size of "too big to fail" banks.

He points out that BofA has made consumer-friendly changes to its credit card, debit card and mortgage policies. The bank even said at a recent meeting with consumer advocates that under certain conditions, it would support the creation of an independent Consumer Financial Protection Agency. (Previously, it's implied only that it would not oppose this agency.)

Even so, Moynihan's been clear about one reform effort he can't back: Any proposal that will impair banks' global competitiveness by making it harder for them to conduct their array of business operations.

Moving away from mass market?

Moynihan says, though, that after decades of gobbling up competitors — his paternal grandfather worked at a small upstate New York bank that has been rolled up into BofA — the bank is done with acquisitions for "many years" to come. Now, his challenge is to grow BofA's businesses organically.

Analysts say that the CEO's recent trip to China — after just three months on the job — signals that he intends to pursue overseas growth more aggressively than his predecessors. Already, BofA owns a minority stake in China Construction Bank and hopes to get a securities license in China in the next few years.

In the U.S., BofA will focus more on its corporate and capital markets operations, Bove predicts. He says the bank will likely maximize profit margins by shrinking its operations — closing branches and shedding a few hundred thousand mass market consumers. Many of those consumers, the analyst argues, have become less profitable due to restrictions on credit card and overdraft fees.

BofA has said it expects to take about a $900 million hit to its bottom line in 2010 due to credit card restrictions. Its service charges will be roughly another $1 billion lower this year due to changes it has voluntarily made to its overdraft policies, as well as those made to comply with a new Federal Reserve rule.

Martin Eakes, chief executive of the Center for Responsible Lending, a consumer advocacy group, says he's been impressed by the bank's promise to "serve customers in the right way." Still, he points out, "The proof will be in the pudding."

The bank, on an analysts' call this month, said it would "mitigate" lower service charge income by considering moves such as imposing account maintenance fees. Michael Moebs, founder of economic research firm Moebs Services, says it's clear to him that BofA is "moving away from the little guy on the consumer side and the really small businesses."

Responding to speculation that the bank is looking to shed unprofitable customers, Moynihan says only that it plans to continue being the largest in the U.S. to serve the mass market and the wealthy.