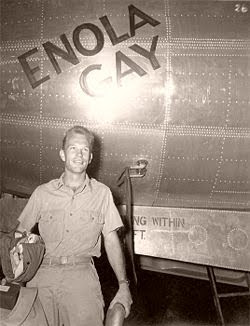 On Aug. 6, 1945, Jeppson and another man armed the bomb called 'Little Boy' aboard the B-29 Superfortress Enola Gay. The bombing is credited with bringing an early end to WWII.

latimes.com
Morris "Dick" Jeppson, a weapons specialist who was mid-flight when he completed arming the first atomic bomb, which the Enola Gay B-29 Superfortress dropped on Hiroshima in World War II, has died. He was 87.

The historic combat mission on Aug. 6, 1945, was the only one Jeppson ever flew.

Worried about his family's safety, he remained silent for decades about his role in the attack that killed at least 80,000 people, leveled two-thirds of the Japanese city and ignited controversy for having unleashed atomic power as a weapon.

When the Army Air Forces unit that flew the mission gathered in 1995, Jeppson attended and spoke in public about the bombing for the first time.

"You had a job to do, you just did it," Jeppson had often said since then.

The mission is credited with helping to bring an early end to the war. Three days after the bombing of Hiroshima, another B-29 dropped an atomic bomb on Nagasaki, prompting the Japanese surrender.

Navigator Theodore "Dutch" Van Kirk, 89, the only surviving member of the 12-man Enola Gay crew, told The Times that Jeppson was "quiet, efficient and businesslike" during the mission. "He wasn't the type of guy to blow his own horn."

Jeppson, one of several men trained to arm the bomb, was a 23-year-old second lieutenant when he was chosen to climb into the bomb bay on a coin toss.

With him was weaponeer Navy Capt. William "Deak" Parsons. Together they began arming the bomb with Jeppson acting as assistant, handing over tools.

"They did that very early in the mission, in the first half hour," said Dick Daso, curator of Modern Military Aircraft at the Smithsonian National Air and Space Museum. "After that, they had to come inside the cabin because the bomb bay wasn't pressurized."

A few hours later, Jeppson made a final visit to the bay to change out three green safety plugs -- each "the size of a saltshaker," he later said -- for the red plugs that armed the bomb.

He made his way to the cockpit and told the plane's pilot, Col. Paul W. Tibbets Jr., that the bomb called "Little Boy" was set to go.

Once Jeppson felt the B-29 jerk up, he knew the bomb had been dropped.

"People were looking down and seeing this enormous cloud coming up and the destruction spreading," Jeppson told Time magazine in 2005. "And that's the point that it's somber because you know a lot of people are getting destroyed down there in the city."

After the 12-plus-hour flight, the plane returned to Tinian Island in the Pacific, where Jeppson was unexpectedly greeted by a good friend who was a Navy lieutenant. They were sharing dinner when a Navy officer asked Jeppson, "What did you do today?" he recounted in Time. "I said, 'I think we ended the war today.' "

Morris Richard Jeppson was born June 23, 1922, in Logan, Utah, one of three sons of Robert and Elsie Jeppson. While he was growing up in Carson City, Nev., his father worked in agricultural education for the state.

At 19, Jeppson joined the military and was part of a group that spent 10 months studying engineering and radar at Yale and Harvard universities and the Massachusetts Institute of Technology.

With several others, he was assigned to remote Wendover, Utah, and the 509th Composite Group. It was the first military unit formed to wage nuclear war.

At the end of the Enola Gay mission, Jeppson kept a few of the plugs that signified his role in the bombing. When he sold two of them for $167,500 at auction in 2002, the federal government claimed they were classified material and tried, but failed, to block the sale.

After the war, Jeppson studied toward a doctorate in physics at UC Berkeley, working at its radiation laboratory and the Lawrence Livermore laboratory.

He also founded a number of companies, including Applied Radiation Corp., which built electron-beam accelerators for nuclear physics research, and Cryodry Corp., a maker of industrial microwave ovens.

A longtime resident of Carmel, Calif., he retired to Las Vegas 20 years ago.

In addition to Molly, his wife of 48 years, Jeppson is survived by a brother, four daughters, two sons, 11 grandchildren and 10 great-grandchildren.
Posted by Mercury at 7:39 PM