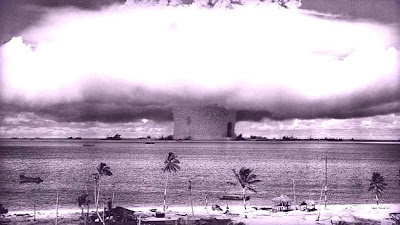 Is this a case of greed or genuine need. And as usual the government made sure their butts were covered from any further litigation.

"Supreme Court: No review of award for US nuclear weapons tests"

US settled a claim more than 25 years ago over damage from its 67 nuclear weapons tests in the South Pacific. But Marshall Islands residents claim compensation was not 'just' under the Constitution and sued. The US Supreme Court on Monday declined to hear their case.

The Christian Science Monitor
The US Supreme Court on Monday declined to take up a challenge by residents of a string of South Pacific islands seeking "just compensation" for losing their homes and their land to US nuclear weapons testing conducted in the islands from 1946 to 1958.

Portions of the coral-fringed atolls were vaporized in 67 nuclear explosions ranging from 0.19 kilotons to a 15-megaton blast equivalent to 1,000 Hiroshima bombs. Nuclear fallout rained down on what remained of the islands.

The action upholds a decision by the US Court of Appeals for the Federal Circuit dismissing two lawsuits seeking fair payment from the US government for the people of Bikini Atoll and Enewetak Atoll.

Island residents voted to approve the agreement in 1983. Congress and the president followed suit in 1986, and the agreement was finalized.

The agreement acknowledged that island officials were authorized to petition Congress for additional funds in the event of “changed circumstances.” But it also said the settlement would provide the final and unreviewable resolution of any claims made by the people of the Marshall Islands against the US for its nuclear testing.

Island residents sued, claiming the US government owed them just compensation under the Constitution’s Fifth Amendment for taking their land and the surrounding sea for the public purpose of nuclear weapons testing.

The Obama administration urged the high court to reject the appeal.

“The United States and the Marshall Islands settled all claims including the takings claims, and as part of that settlement agreed to preclude further review of those claims in any federal court,” wrote US Solicitor General Elena Kagan in the government’s brief.

Ms. Kagan quoted a portion of the 1986 agreement, that the compact between the two countries “constitutes the full settlement of all claims, past, present and future, of the government, citizens, and nationals of the Marshall Islands.”

That can’t be right, countered Washington lawyer Paul Wolfson in his brief on behalf of island residents seeking compensation.

The Fifth Amendment mandates that private property shall not be taken by the government for public use “without just compensation.” Mr. Wolfson said that Congress is free to craft alternative methods to address the payment issue, but that neither the government nor the courts can avoid the constitutional command that fair compensation be paid.

“This case presents an issue essential to the security of all property owners: whether the government may evade the constitutional guarantee of just compensation … by stripping the courts of jurisdiction over any claim that it has not provided just compensation for the taking,” Wolfson wrote.

“Without this court’s review,” he added, “the government will have effectively insulated itself from the fundamental constitutional requirement that it pay just compensation for the taking of property.”
Posted by Mercury at 6:33 AM