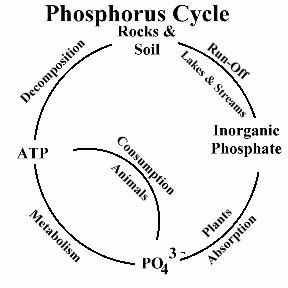 Phosphorus is the key to energy in living organisms, for it is phosphorus that moves energy from ATP to another molecule, driving an enzymatic reaction, or cellular transport. Phosphorus is also the glue that holds DNA together, binding deoxyribose sugars together, forming the backbone of the DNA molecule. Phosphorus does the same job in RNA.

Again, the keystone of getting phosphorus into trophic systems are plants. Plants absorb phosphorous from water and soil into their tissues, tying them to organic molecules. Once taken up by plants, phosphorus is available for animals when they consume the plants.

When plants and animals die, bacteria decomposes their bodies, releasing some of the phosphorus back into the soil. Once in the soil, phosphorous can be moved 100s to 1,000s of miles from were they were released by riding through streams and rivers. So the water cycle plays a key role of moving phosphorus from ecosystem to ecosystem.

In some cases, phosphorous will travel to a lake, and settle on the bottom. There, it may turn into sedimentary rocks, limestone, to be released millions of years later. So sedimentary rocks acts like a back, conserving much of the phosphorus for future eons.
If this is true, there may be serious crop planting issues.

It's an essential, if underappreciated component of our daily lives, and a key link in the global food chain. And it's running out.

Foreign Policy
From Kansas to China's Sichuan province, farmers treat their fields with phosphorus-rich fertilizer to increase the yield of their crops. What happens next, however, receives relatively little attention. Large amounts of this resource are lost from farm fields, through soil erosion and runoff, and down swirling toilets, through our urine and feces. Although seemingly mundane, this process cannot continue indefinitely. Our dwindling supply of phosphorus, a primary component underlying the growth of global agricultural production, threatens to disrupt food security across the planet during the coming century. This is the gravest natural resource shortage you've never heard of.

The root of this problem has previously been the subject of presidential concern. In a message to Congress in 1938, U.S. President Franklin D. Roosevelt warned that the phosphorus content of American agricultural land "has greatly diminished." This shortage, Roosevelt warned, could cause low crop yields and poor-quality produce, detrimentally affecting "the physical health and economic security of the people of the nation."

Phosphorus is used extensively for a variety of key functions in all living things, including the construction of DNA and cell membranes. As it is relatively rare in the Earth's crust, a lack of phosphorus is often the limiting factor in the growth of plants and algae. In humans, it plays an essential role in bone formation. Without a steady supply of this resource, global agricultural production will face a bottleneck, and humankind's growing population will suffer a serious nutrition shortage.

The world's reliance on phosphorus is an unappreciated aspect of the "Green Revolution," a series of agricultural innovations that made it possible to feed the approximately 4.2 billion-person increase in the global population since 1950. This massive expansion of global agricultural production required a simultaneous increase in the supply of key resources, including water and nitrogen. Without an increase in phosphorus, however, crops would still have lacked the resources necessary to fuel a substantial increase in production, and the Green Revolution would not have gotten off the ground.

Roosevelt's warning was prescient and stimulated agricultural engineers to find an effective, albeit temporary, solution. To satisfy the world's growing food demand, they mobilized global mining efforts in ancient, phosphorus-rich marine deposits. By 2008, industrial farmers were applying an annual 17 million metric tons of mined phosphorus on their fields. Demand is expanding at around 3 percent a year -- a rate that is likely to accelerate due to rising prosperity in the developing world (richer people consume more meat) and the burgeoning bioenergy sector, which also requires phosphorus to support crop-based biofuels.

Our supply of mined phosphorus is running out. Many mines used to meet this growing demand are degrading, as they are increasingly forced to access deeper layers and extract a lower quality of phosphate-bearing rock (phosphate is the chemical form in which nearly all phosphorus is found). Some initial analyses from scientists with the Global Phosphorus Research Initiative estimate that there will not be sufficient phosphorus supplies from mining to meet agricultural demand within 30 to 40 years. Although more research is clearly needed, this is not a comforting time scale.

The geographic concentration of phosphate mines also threatens to usher in an era of intense resource competition. Nearly 90 percent of the world's estimated phosphorus reserves are found in five countries: Morocco, China, South Africa, Jordan, and the United States. In comparison, the 12 countries that make up the OPEC cartel control only 75 percent of the world's oil reserves.

This fact could spark international tension and even influence how countries attempt to draw their internal boundaries. Many of Morocco's phosphate mines are in Western Sahara, a disputed independent territory that is occupied by Morocco and the site of growing international human rights concerns. Reflecting these concerns, U.N.-sanctioned export restrictions on phosphate and other resources are now in place, though the efficacy of the bans is incomplete. China, the country with the largest phosphorus reserves after Morocco, imposed a 135 percent tariff on the resource as part of 2008's complex series of events in which rising fuel and fertilizer costs led to rapid increases in food prices. The tariff effectively eliminated exports. Although the tariff was subsequently lifted as the 2008 food crisis faded, the imposition of this sort of trade barrier could become a regular occurrence as supplies dwindle worldwide.

The United States has only 12 phosphorus mines. The supplies from the most productive mine, in Florida, are declining rapidly -- it will be commercially depleted within 20 years. The United States exported phosphorus for decades but now imports about 10 percent of its supply, all from Morocco, with which it signed a free trade agreement in 2004.

The effects of this resource shortage will be felt long before the last phosphorus atom is extracted from the last mine. Increased demand for fertilizer and the decreased supply of phosphorus exports will result in higher prices, significantly affecting millions of farmers in the developing world who live on the brink of bankruptcy and starvation. Rising fertilizer prices could tip this balance.

Already, signs are emerging that our current practices cannot continue for long. Between 2003 and 2008, phosphate fertilizer prices rose approximately 350 percent. In 2008, rising food prices sparked riots in more than 40 countries. Although the spike in fertilizer prices was only partially responsible for the higher food prices, the riots illustrate the social upheaval caused by disruptions to the world's food supply. The 2008 food riots were only stopped by government promises of food subsidies -- a viable strategy only as long as governments can afford the ever-increasing costs of food support.

Establishing a reliable phosphorus supply is essential for assuring long-term, sustainable food security. We need to dramatically reduce the demand for phosphate rock by eliminating our wasteful practices. This will require a combination of low-tech and high-tech solutions, including efforts to prevent soil erosion, development of more-targeted methods of fertilizer application, and the creation of new, phosphorus-efficient crops, which produce a larger yield per phosphorus unit applied. Fortunately, unlike fossil fuels, phosphorus can be used over and over -- this is what occurs in natural ecosystems, where it is recycled innumerable times from its first mobilization from the Earth's crust to its eventual deposition into lake and ocean sediments.

If we fail to meet this challenge, humanity faces a Malthusian trap of widespread famine on a scale that we have not yet experienced. The geopolitical impacts of such disruptions will be severe, as an increasing number of states fail to provide their citizens with a sufficient food supply. This dark scenario need not, however, be our fate. If we are successful in rising to the phosphorus sustainability challenge, as well as other aspects of sustainable agriculture, we can look forward to a future in which families, communities, and countries are healthy and secure in their nutrition and where all live in a world with cleaner rivers, lakes, and oceans.
Posted by Mercury at 4:52 PM