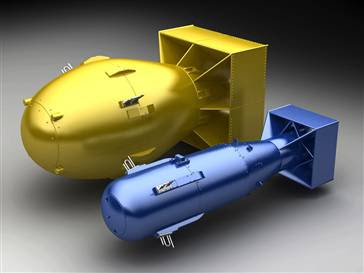 Do you really believe this?

"Barack Obama to limit use of US nuclear weapons"

guardian.co.uk
Obama described his policy as part of a broader effort to achieve a world free of nuclear weapons.

The US will not use nuclear weapons against non-nuclear states that comply with the nuclear non-proliferation treaty, even if it is attacked with biological or chemical weapons, Barack Obama is expected to announce today.

However, the US president is expected to stop short of declaring that the US would never be the first to launch a nuclear attack, as many arms control advocates had recommended.

Obama will describe the purpose of weapons as "primarily" or "fundamentally" to deter or respond to a nuclear attack. But even as he limits the conditions for a nuclear strike, the president will make an exception for states such as Iran and North Korea, which have violated or renounced the NPT.

In an interview with the New York Times, before today's unveiling of the new US nuclear strategy, Obama described his policy as part of a broader effort to achieve a world free of nuclear weapons.

Obama can expect an onslaught from conservatives who believe that such an approach undermines US national security. At the other end of the spectrum, liberals will be disappointed that he stops short of renouncing the first-strike option altogether.

"We are going to want to make sure that we can continue to move towards less emphasis on nuclear weapons," Obama told the New York Times, "while making sure that our conventional weapons capability is an effective deterrent in all but the most extreme circumstances".

There are five declared nuclear states: the US, Britain, France, Russia and China. Three states with nuclear weapons have refused to sign the NPT – India, Pakistan and Israel – and North Korea renounced the treaty in 2003.

Iran remains a signatory, but the UN security council has repeatedly found it in violation of its obligations, because it has hidden nuclear plants and refused to answer questions about allegations that it was working on a warhead.

The new strategy, known as the nuclear posture review, comes amid a flurry of nuclear diplomacy. Obama plans to fly to Prague to sign a new arms control agreement with Russia on Thursday to slash nuclear arsenals by a third. The following week, he will host 47 world leaders in Washington for a summit meeting on nuclear security.

Obama's new strategy marks a break with the Bush administration's more hawkish policy set out in its 2002 review, threatening the use of nuclear weapons to pre-empt or respond to chemical or biological attack, even from non-nuclear countries.

Those threats, Obama said, could be deterred with "a series of graded options" – a combination of old and newly -designed conventional weapons. In another departure from his predecessor, Obama will commit the US to no new atomic arms development, US officials said.

The US will, however, increase investment in upgrading its weapons infrastructure, which one White House official said would "facilitate further nuclear reductions".

In line with an in-depth review of US nuclear weapons policy, the administration also hopes to persuade Russia to agree to open talks on mutual cuts in nuclear arsenals that go beyond the Strategic Arms Reduction Treaty (Start) treaty to be signed in Prague.

The White House hopes to overcome Russia's expressed reluctance to move beyond Start, signed at the end of the cold war in 1991 and which expired in December, especially if it means cutting Moscow's arsenal of tactical, or short-range nuclear arms. Russia considers these so-called theatre nuclear weapons vital to its defence strategy and an important bargaining chip on security issues.

An early test will be the estimated 200 tactical nuclear weapons – considered largely obsolete – the US still has stationed in western Europe. Russia has called for their removal, but Obama said he wanted to consult his Nato allies before such a commitment.

The Nuclear Posture Review will announce reductions in the number of warheads and further limit their use. It reportedly will not rule out their deployment for offensive purposes.

latimes.com
The Obama administration is releasing a major statement on nuclear weapons policy that will herald a further shrinking of the U.S. arsenal, even as it rejects some sweeping steps advocated by arms control advocates.

The statement, to be released Tuesday, will announce that the arsenal will shrink by thousands of warheads, and it will further restrict when the weapons may be used, U.S. officials say. But the administration has rejected proposals to declare that the "sole purpose" of nuclear arms is deterrence, nor will it promise that the United States won't be the first to use nuclear weapons in a war, say people who have been close to the discussions.

The document, called the Nuclear Posture Review, is an important part of President Obama's program to reduce nuclear arms, which moves into a higher gear in the next few days. Obama will sign a U.S.-Russian arms treaty in Prague, the Czech capital, on Thursday and will host a nuclear security summit in Washington next week.

His review is expected to omit some of the more hawkish statements made in 2001 in President George W. Bush's review.

Monday night, the White House released an outline of the review, saying it "focuses on preventing nuclear terrorism and proliferation and reducing the role of nuclear weapons in our national security strategy, while sustaining a safe, secure and effective nuclear deterrent."

In his effort to persuade other nations to forswear nuclear arms, Obama must show that his administration is also moving away from them. Obama has said he will "reduce the role of nuclear weapons in our national security strategy."

Arms control advocates who have been following the discussion say they view the nuclear manifesto as a positive step but not as bold as they might have wished.

Tom Collina, research director of the Arms Control Assn., said other countries would be encouraged to hear that the administration had decided for now not to develop a new nuclear warhead. He said, however, that he thought some nations would be distressed that the U.S. was unwilling to declare that nuclear arms were solely meant to deter nuclear attacks.

The document will point to the new U.S.-Russian arms treaty to show progress in reducing the United States' arsenal. The administration says the treaty will scale back the number of deployed long-range warheads by 30%, though some analysts believe the cuts may actually be much smaller.

The review is widely expected to announce additional reductions from the estimated 2,000 nuclear weapons held in reserve.

The document is expected to announce that the Pentagon will retire the Tomahawk Land Attack Missile, a ship- and submarine-launched cruise missile that has been in storage. But it is expected to leave unresolved the issue of whether to retire the estimated 200 tactical, or battlefield, nuclear weapons that are based in Europe.
Posted by Mercury at 6:57 AM

OH Joy!!! we are free of nuclear devastation!!! yeah team!!!