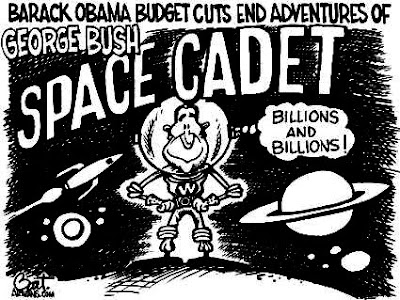 Ruminations of old astronauts stuck in a philosophy of the past.

USA TODAY
President Obama's plans for NASA could be "devastating" to the U.S. space program and "destines our nation to become one of second- or even third-rate stature," three legendary astronauts said in a letter Tuesday.

Neil Armstrong, who rarely makes public comments, was the first human to set foot on the moon. Jim Lovell commanded the famous Apollo 13 flight, an aborted moon mission. And Apollo 17 commander Gene Cernan remains the last human to have walked on the lunar surface.

In statements e-mailed to the Associated Press and NBC, Armstrong and other astronauts took exception with Obama's plan to cancel NASA's return-to-the-moon program, dubbed Project Constellation.

Armstrong, in an e-mail to the AP, said he had "substantial reservations." More than two dozen Apollo-era veterans, including Lovell and Cernan, signed another letter Monday calling the plan a "misguided proposal that forces NASA out of human space operations for the foreseeable future."

The statements came days before Obama is to visit Kennedy Space Center on Thursday to explain his vision for NASA.

Not all former astronauts have come out against the plan. Armstrong's crewmate Buzz Aldrin, the second man to stand on the moon, has endorsed Obama's plan, which includes investing $6 billion to develop commercial space-taxi services for astronauts traveling to and from the International Space Station. Aldrin said the proposal will "allow us to again be pushing the boundaries to achieve new and challenging things beyond Earth."

The plan would also extend the space station operations through 2020. It would cancel Project Constellation and the Ares rockets, which NASA has been developing for six years at a cost of more than $9 billion. Obama would retain the Constellation project's Orion capsule. The capsule, which was to go to the moon, will instead be sent unoccupied to the International Space Station to stand by as an emergency vehicle to return astronauts home.

Administration officials told the AP that NASA will speed up development of a rocket that would have the power to blast crew and cargo far from Earth, although no destination has been chosen. The rocket would be ready to launch several years earlier than under the moon plan. The officials spoke on condition of anonymity to not detract from the presidential announcement.

The former astronauts said, "It appears that we will have wasted our current $10-plus-billion investment in Constellation. … Without the skill and experience that actual spacecraft operation provides, the USA is far too likely to be on a long downward slide to mediocrity."

Letter from "...former astronauts Neil Armstrong, James Lovell and Eugene Cernan urge President Obama to reconsider what they warn would be "devastating" new policies for the future of NASA."

The United States entered into the challenge of space exploration under President Eisenhower’s first term, however, it was the Soviet Union who excelled in those early years. Under the bold vision of Presidents Kennedy, Johnson, and Nixon, and with the overwhelming approval of the American people, we rapidly closed the gap in the final third; of the 20th century, and became the world leader in space exploration.

America’s space accomplishments earned the respect and admiration of the world. Science probes were unlocking the secrets of the cosmos; space technology was providing instantaneous worldwide communication; orbital sentinels were helping man understand the vagaries of nature. Above all else, the people around the world were inspired by the human exploration of space and the expanding of man’s frontier. It suggested that what had been thought to be impossible was now within reach. Students were inspired to prepare themselves to be a part of this new age. No government program in modern history has been so effective in motivating the young to do “what has never been done before.”

World leadership in space was not achieved easily. In the first half-century of the space age, our country made a significant financial investment, thousands of Americans dedicated themselves to the effort, and some gave their lives to achieve the dream of a nation. In the latter part of the first half century of the space age, Americans and their international partners focused primarily on exploiting the near frontiers of space with the Space Shuttle and the International Space Station.

As a result of the tragic loss of the Space Shuttle Columbia in 2003, it was concluded that our space policy required a new strategic vision. Extensive studies and analysis led to this new mandate: meet our existing commitments, return to our exploration roots, return to the moon, and prepare to venture further outward to the asteroids and to Mars. The program was named "Constellation." In the ensuing years, this plan was endorsed by two Presidents of different parties and approved by both Democratic and Republican congresses.

The Columbia Accident Board had given NASA a number of recommendations fundamental to the Constellation architecture which were duly incorporated. The Ares rocket family was patterned after the Von Braun Modular concept so essential to the success of the Saturn 1B and the Saturn 5. A number of components in the Ares 1 rocket would become the foundation of the very large heavy lift Ares V, thus reducing the total development costs substantially. After the Ares 1 becomes operational, the only major new components necessary for the Ares V would be the larger propellant tanks to support the heavy lift requirements.

The design and the production of the flight components and infrastructure to implement this vision was well underway. Detailed planning of all the major sectors of the program had begun. Enthusiasm within NASA and throughout the country was very high.

When President Obama recently released his budget for NASA, he proposed a slight increase in total funding, substantial research and technology development, an extension of the International Space Station operation until 2020, long range planning for a new but undefined heavy lift rocket and significant funding for the development of commercial access to low earth orbit.

Although some of these proposals have merit, the accompanying decision to cancel the Constellation program, its Ares 1 and Ares V rockets, and the Orion spacecraft, is devastating.

America’s only path to low Earth orbit and the International Space Station will now be subject to an agreement with Russia to purchase space on their Soyuz (at a price of over 50 million dollars per seat with significant increases expected in the near future) until we have the capacity to provide transportation for ourselves. The availability of a commercial transport to orbit as envisioned in the President’s proposal cannot be predicted with any certainty, but is likely to take substantially longer and be more expensive than we would hope.

It appears that we will have wasted our current $10-plus billion investment in Constellation and, equally importantly, we will have lost the many years required to recreate the equivalent of what we will have discarded.

For The United States, the leading space faring nation for nearly half a century, to be without carriage to low Earth orbit and with no human exploration capability to go beyond Earth orbit for an indeterminate time into the future, destines our nation to become one of second or even third rate stature. While the President's plan envisages humans traveling away from Earth and perhaps toward Mars at some time in the future, the lack of developed rockets and spacecraft will assure that ability will not be available for many years.

Without the skill and experience that actual spacecraft operation provides, the USA is far too likely to be on a long downhill slide to mediocrity. America must decide if it wishes to remain a leader in space. If it does, we should institute a program which will give us the very best chance of achieving that goal.

Eugene Cernan
Commander, Apollo 17
Posted by Mercury at 7:07 AM

and this just puzzles me because we no longer have to pay for defense because President Obama has achieved world peace and completely de-nucleared the world...it must be he is spending the money on needy Katrina victims...amazing