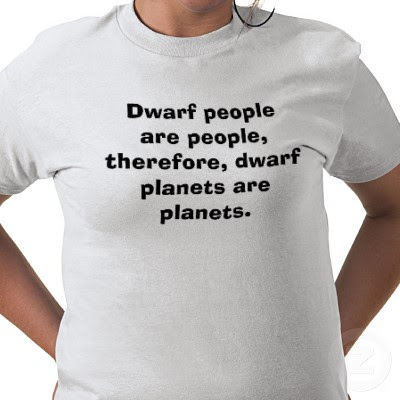 SPACE DAILY
New research from the Australian National University has further reduced the status of Pluto by suggesting there are many more dwarf planets in the Solar System
than previously thought.

ANU astronomers have just published results that would reclassify what it is to be a dwarf planet, increasing the number of Pluto's fellow travellers by a factor of ten.

Dr Charley Lineweaver and Dr Marc Norman from the ANU Planetary Science Institute looked at how spherical the icy moons in our solar system are, and recalculated the size of objects at the boundary between dwarf planets and small solar system bodies. Previous estimates have classified icy objects with radii larger than 400 km as dwarf planets.

The new research suggests that this radius should be closer to 200 km, which would increase the number of objects classified as dwarf planets to roughly 50.

"Small solar system objects are irregularly shaped, like potatoes," Dr Lineweaver said. "If an object is large enough that its self-gravity has made it round, then it should be classified as a dwarf planet. We calculated how big rocky objects (like asteroids) have to be, and how big icy objects (like the moons of the outer planets and objects further out than Neptune) have to be, for their self-gravity to make them round. For icy objects we found a 'potato radius' of roughly 200km - about half as large as the roughly 400km radius now used to classify dwarf planets.

"The boundary between dwarf planets and small solar system bodies is somewhat arbitrary, but is based on the concept of hydrostatic equilibrium, or how round an object is. Whether the self-gravity of an object is strong enough to make the object round depends on the strength of its material. That is why strong rocky objects need to have a radius of roughly 300km before they turn from lumpy, potato-shaped bodies into spheres, while weaker icy objects can be spheres with a radius of only roughly 200km."

Lineweaver and Norman's paper "The Potato Radius: a Lower Minimum Size for Dwarf Planets" will be published in the Proceedings of the 9th Australian Space Science Conference, eds W. Short and I. Cairns, and is available at http://www.mso.anu.edu.au/~charley/publications.html

Studying dwarf planets and objects in the Kuiper Belt can help astrobiologists get a better picture of how our solar system formed and how it was able to support habitable worlds like Earth. Some scientists also believe that impactors that have struck Earth in the past, such as comets, could have originated from this mysterious region of the solar system. Studying Kuiper Belt objects can help astrobiologists understand the likelyhood of such objects entering into collision-course orbits with Earth in the future.
Posted by Mercury at 6:21 PM

Adding more dwarf planets is in no way another demotion for Pluto. The reason is that in spite of the controversial IAU decision, dwarf planets are planets too. Dr. Alan Stern, who coined the term, intended it to refer to a subclass of planets large enough to be in hydrostatic equilibrium (pulled into a round shape by their own gravity) but not large enough to gravitationally dominate their orbits. He never intended dwarf planets to be designated as not planets at all. And he said he anticipates there being hundreds of these small planets in our solar system.

Only four percent of the IAU voted on this, and most are not planetary scientists. Their decision was immediately opposed in a formal petition by hundreds of professional astronomers led by Dr. Alan Stern, Principal Investigator of NASA’s New Horizons mission to Pluto. Stern and like-minded scientists favor a broader planet definition that includes any non-self-luminous spheroidal body in orbit around a star. The spherical part is important because objects become spherical when they attain a state known as hydrostatic equilibrium, meaning they are large enough for their own gravity to pull them into a round shape. This is a characteristic of planets and not of shapeless asteroids and Kuiper Belt Objects. Pluto meets this criterion and is therefore a planet. Under this definition, our solar system has 13 planets: Mercury, Venus, Earth, Mars, Ceres, Jupiter, Saturn, Uranus, Neptune, Pluto, Haumea, Makemake, and Eris.

Your persistence will be my demise and frankly, that would be the only way that this disagreement we have will be resolved. And I declare that it is one-sided in that I am your senior by nearly 40 years...the odds are in your favor unless my hitman fails. :)

Interesting that you propose thirteen planets. I could live with that but remember that "change" is difficult to achieve and besides, couldn't you list at least one more..."thirteen" will have such a negative connotation. There are a lot of triskaidekaphobiaites.

By the way Laurel, are you on board "New Horizons"?

Mercury, I would never want your demise, and I don't think our positions are that far apart. Besides, how could I feel anything but friendship for someone who devoted an entire blog entry to my efforts for Pluto? There are a few astronomers who will remain nameless who have expressed genuine hostility to me and now refuse to even answer any of my emails or messages. Thankfully, you're not one of them, and I enjoy our back and forth discussion.

Are you sure about the age difference? I look, act, and live much younger than I really am. That's another one of my quirks--I've got this thing about staying forever young.

Don't worry; if those of us who want a geophysical definition of planet have our way, the number will not stay at 13. It will likely be more than 50. Triskaidekaphobiaites need not worry. :)

Unfortunately, I am not on board New Horizons. I found out about getting one's name on the CD too late. If only there were a way of uploading more names. After all, they can upload other information like slight course changes.

I like to think that I am fair in promoting serious and dedicated alternative perspectives. I have no place for unsupported and hip shooting positions of which I frequently receive. These I dismiss as nonsense and not germane to the spirit of this blog. I found your perspective healthy and worthy and not at all surprised at myopic scientists. They are narrow minded fools and certainly not genuine scientists. I would like to site a specific example of an individual that I knew prior to the formation of this blog who held some radical cosmological views specifically regarding the sun's core. He is a nuclear chemist and has spent over 40 years analyzing data and came to the conclusion that the sun's core is made of iron. This is preposterous say the experts but his detailed scientific analysis suggest there may be truth in his hypothesis. He is not a crackpot and I featured a topic on his theory and invited him to participate...of which he did. You are not a crackpot either...just expressing a very passionate stance regarding in a narrow perspective Pluto's status and in a broad sense a better definition of planets. Radical changes come slowly and I am sure given some time, a new classification is tenable that will make everyone content.

You and I will still fuss with each other...and that's fine.