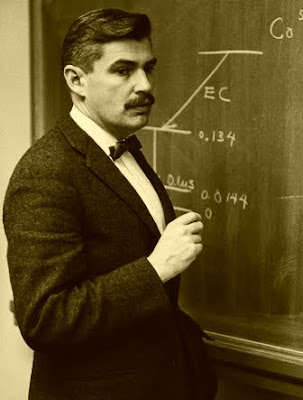 The New York Times
Robert Pound, a Harvard physicist whose experiments provided the first laboratory confirmation of Einstein’s general theory of relativity and helped pave the way for the age of magnetic resonance imaging, died on April 12 in Belmont, Mass. He was 90.

The death, at a nursing home, was confirmed by his son, John. Although he never earned a doctorate, Professor Pound was known as a brilliant hands-on physicist who built his own apparatus. In a career that spanned more than 60 years at Harvard, Professor Pound conceived and built devices that helped him probe the workings of the atom, leading to advances in technology and medicine.

“He was an excellent theorist, but his role was as a designer and builder,” said Peter Galison, a Harvard professor of physics and the history of science. “He invented everything himself. It was Pound who made the thing work.”

His best-known contribution came in 1959, when, with his student Glen Rebka, he showed that gravity can change the frequency of light. The effect, which had gone unmeasured after decades of astronomical observations, had been predicted by Einstein’s theory of general relativity, which explains how gravity can warp space and time.

“Other people thought you’d have to do the experiment on top of a mountain, but Bob recognized that we could do this in the building,” said Dr. Rebka, an emeritus professor of physics at the University of Wyoming.

By rigging an abandoned indoor tower to capture infinitesimal changes in the wavelength of rays emitted by radioactive iron, Professor Pound and Dr. Rebka measured the effect of gravity on light. The principle has since been used to calibrate atomic clocks in global positioning satellites.

“We had carpenters cut holes in the floor, from the penthouse to the sub-basement, with cables dropping over to the lab next door,” Dr. Rebka said.

Professor Pound was a member of the Harvard team that discovered nuclear magnetic resonance, by which atomic nuclei can be coaxed into absorbing and emitting energy at specific frequencies, leading to a new era of three-dimensional medical imaging.

Although nuclear resonance had been observed among sparse atoms in a vacuum in 1938, it was the Harvard group, which also included E. M. Purcell and H. C. Torrey, that first observed it in ordinary solids and liquids.

“The Pound box was a devilishly clever way of measuring that subtle absorption of radio waves,” said Paul Horowitz, a professor of physics and of electrical engineering at Harvard, and a former student of Professor Pound. “His electronics expertise made that experiment possible.”

Since it was recognized with a Nobel Prize in 1952 (which Professor Pound’s collaborator Edward Purcell shared with Felix Bloch of Stanford University), nuclear magnetic resonance has become a standard technique for revealing the structure of molecules.

In the 1970s it led to the birth of magnetic resonance imaging, which revolutionized medical diagnosis by allowing doctors to take high-resolution images of the interior of the human body.

Nuclear resonance has since been used for purposes from oil exploration to quantum computing.

Professor Pound’s mechanical zeal extended beyond the laboratory. As a young man he installed a telegraph key in his blue Ford coupe that allowed him to tap out Morse code messages on the horn. He later owned a hovercraft lawnmower.

Around the Harvard campus he cut an elegant figure, sporting a trim mustache and longish hair. And though he was known as soft-spoken and unpretentious, he could be assertive in his opinions. In the 1970s he opposed Harvard’s core curriculum, arguing that the university should trust talented students to choose their own courses. In 1980, at a time of fear about the health effects of radiation, he proposed that the nation save energy by building rooms that could heat human bodies directly using microwave radiation.

Robert Vivian Pound was born in Ridgeway, Ontario, on May 16, 1919, the son of a mathematician. On graduating from the University of Buffalo in 1941, he married and moved to Boston to take a wartime job designing radar and sonar devices.

As the war continued, he was hired by the M.I.T. Radiation Laboratory, where, working to develop radar systems for the Allied forces, he helped to lay the groundwork for postwar advances in nuclear imaging techniques.

Professor Pound earned a fellowship at Harvard in 1945 and stayed there the rest of his career. After his groundbreaking work in the 1950s, he became Mallinckrodt professor of physics in 1968, and served as head of the physics department and laboratories at Harvard in the ensuing decade.

A loyal mentor, Professor Pound nurtured a crop of hands-on physicists who have since done pioneering work in medical imaging, printing technology and the search for extraterrestrial life — as well as nuclear physics.

“He didn’t strike you immediately as being brilliant,” said David Griesinger, a student of Professor Pound who went on to work as an acoustical engineer. “The way he thought was slower and deeper.”

Over the years Professor Pound received many honors for his work, including the National Medal of Science and the Eddington Medal of the Royal Astronomical Society.

In addition to his son, John, of San Rafael, Calif., he is survived by his wife, Betty, of Belmont, Mass., and two grandchildren.

Professor Pound was a tinkerer at heart. He owned a series of elegant British sedans, which he would lovingly maintain in his spare time. One student recalls finding him in the machine shop, turning a piece of metal on the lathe in his bow tie and tweeds.

Others recall that when confronted with a mechanical problem in a laboratory setting, he often gave the same advice as he would in the garage: “Did you try whacking it?”

Robert Pound [Wikipedia]
Posted by Mercury at 6:25 AM