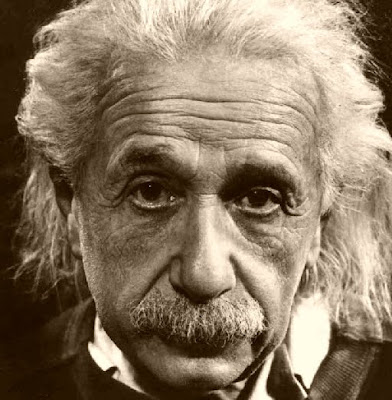 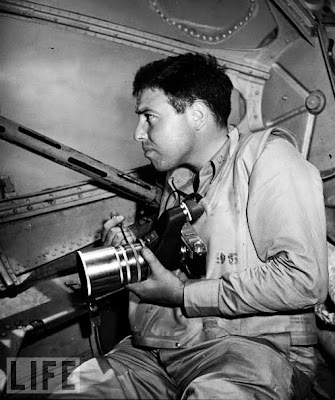 Ralph Morse worked as a photographer for LIFE for decades, covering everything from the liberation of Paris in 1944 to Broadway shows and the Space Race. (John Glenn dubbed him "the eighth astronaut" of NASA's original Mercury Seven.) When the phone rang at his New Jersey home one April morning in 1955 and a LIFE editor asked if he had a camera with him, Morse of course answered, "Yes." Albert Einstein, the editor said, was dead. Morse jumped in his car and drove south, to Princeton, to see what he could find. Now 92 years old and as sharp as ever, Ralph Morse recently sat down with LIFE.com and shared his recollections of that April day as he looked over photographs no one had seen since the day he took them. Pictured: Morse on assignment for LIFE in 1943.
"Photos Surface of the Day Einstein Died"

Wired
Ralph Morse, an ambitious photojournalist for Life magazine, covered a funeral in New Jersey on April 18, 1955. Now, 55 years later, Life.com is finally publishing the pictures he took that day during the funeral and cremation of Albert Einstein.

Einstein died of heart failure at age 76 earlier that morning at Princeton Hospital. The hospital’s pathologist removed his brain for preservation and study, in the hopes that scientists could figure out why he was so smart.

Post-autopsy, the body was moved briefly to a funeral home, then to a crematorium in Trenton, New Jersey, for a short service and cremation. (His ashes were scattered later on the grounds of Princeton’s Institute for Advanced Study.)

Morse followed the mourners as they returned to Einstein’s house at 112 Mercer Street in Princeton. He was the only photographer on the scene during these moving moments.

But when he returned to the Life offices, Morse learned that the magazine wasn’t going to publish the pictures. At the request of Einstein’s son, Hans Albert Einstein, Life respected the family’s privacy while they mourned. Morse and the magazine both forgot about the pictures until recently.

The LIFE magazine photos and captions... 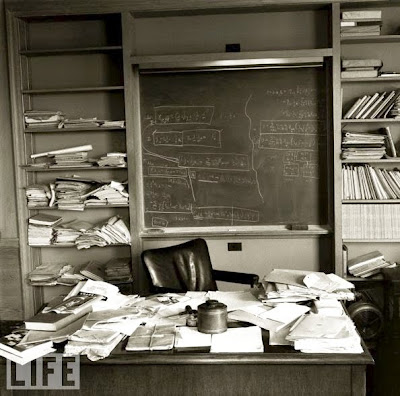 Albert Einstein, the genius physicist whose theories changed our ideas of how the universe works, died 55 years ago, on April 18, 1955, of heart failure. He was 76. His funeral and cremation were intensely private affairs, and only one photographer managed to capture the events of that extraordinary day: LIFE magazine's Ralph Morse. Armed with his camera and a case of scotch -- to open doors and loosen tongues -- Morse compiled a quietly intense record of an icon's passing. But aside from one now-famous image (above), the pictures Morse took that day were never published. At the request of Einstein's son, who asked that the family's privacy be respected while they mourned, LIFE decided not to run the full story, and for 55 years Morse's photographs lay unseen and forgotten. Pictured: Ralph Morse's photograph of Einstein's office in Princeton, taken hours after Einstein's death and captured exactly as the Nobel Prize-winner had left it. 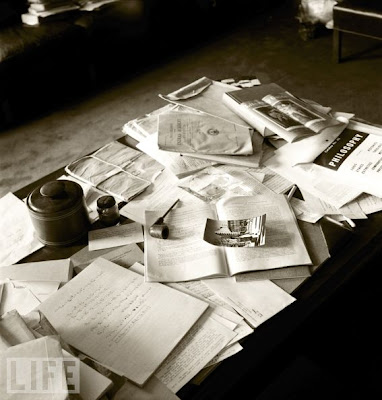 "I grabbed my cameras and drove the ninety miles to Princeton," Morse recalls. "Einstein died at the Princeton Hospital, so I headed there first. But it was chaos -- so many journalists, photographers, onlookers milling around outside what, back then, was a really small hospital. 'Forget this,' I said, and headed over to the building where Einstein's office was. On the way there, I stopped and bought a case of scotch. I knew people might be reluctant to talk to me, and I knew that most people were happy to accept a bottle of scotch instead of money if you offered it in exchange for their help. So, I get to the building and nobody's there. I find the superintendent, give him a fifth of scotch, and he opens up Einstein's office so I can take some photos." Pictured: A never-published photo of Einstein's papers, pipe, ashtray, chalk, and other personal belongings in his Princeton office on the morning of April 18, 1955. 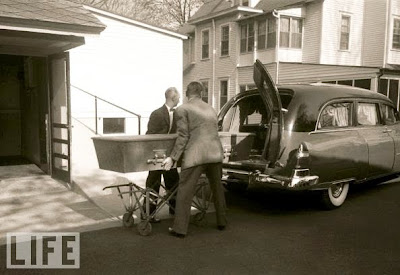 Early in the afternoon, Einstein's body was moved for a short time from the hospital to a funeral home in Princeton. The simple casket containing the corpse, post-autopsy, only stayed at the funeral home for an hour or so. Morse made his way there, and soon saw two men loading a casket into a hearse. For all Morse knew, Einstein's burial was imminent. Hoping to scope out a spot near the grave, he quickly drove to the Princeton Cemetery. "I drive out to the cemetery to try and find where Einstein is going to be buried," Morse remembers. "But there must have been two dozen graves being dug that day! I see a group of guys digging a grave, offer them a bottle, ask them if they know anything. One of them says, 'He ain't gettin' buried. He's being cremated in about twenty minutes. In Trenton!' That's about twenty miles south of Princeton, so I give those guys the rest of the case of scotch, hop in my car, and get to Trenton and the crematorium just before Einstein's friends and family show up." Pictured, from left: unidentified woman; Einstein's son, Hans Albert (in light suit); unidentified woman; Einstein's longtime secretary, Helen Dukas (in light coat); and friend Dr. Gustav Bucky (partially hidden behind Dukas) arrive at the Ewing Crematorium in Trenton on the afternoon of April 18, 1955. 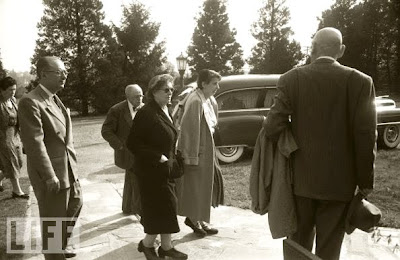 Mourners walk into the service for Einstein, passing the parked hearse that carried his body from Princeton. "I didn't have to tell anyone where I was from," Morse says of his time spent photographing the events of the day. "I was the only photographer there, and it was sort of a given that if there was one photographer on the scene, he had to be from LIFE." At one point early in the day, Einstein's son Hans asked Morse for his name -- a seemingly insignificant, friendly inquiry that would prove, within a few hours, to have significant ramifications. 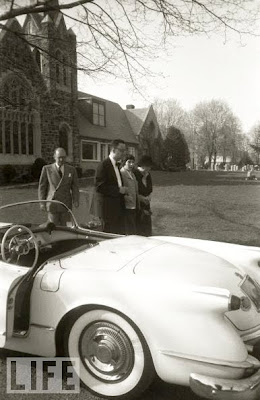 Friends and family make their way to their cars after the service for Einstein. The ceremony was brief: Einstein's friend Otton Nathan, an economist at Princeton and co-executor of the Einstein estate, read some lines by the great German poet, Goethe. Immediately after the service, Einstein's remains were cremated. 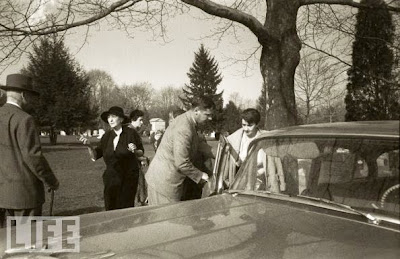 An unidentified man holds a car door open for Einstein's secretary, Helen Dukas, following Einstein's cremation. "As the day was winding down, I was pretty excited," Morse told LIFE.com, "because I knew that I was the only fellow with these pictures. This was big news! You have to remember, Einstein was a huge public figure back then, world famous, and we had this story cold." 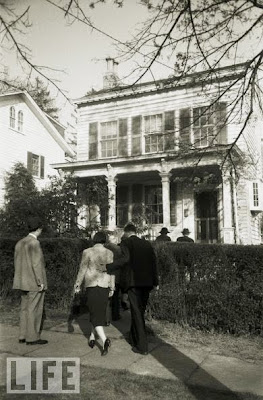 Late in the afternoon, family and friends return to Einstein's home at 112 Mercer Street in Princeton, where he lived for 20 years. Not long after this shot was taken, Morse headed to Manhattan, and the LIFE offices. "I get to New York with the film, and there are signs all over the place: 'Ralph, see Ed!' Ed Thompson was LIFE's managing editor. A great journalist. We all liked him, and trusted him. Ed says, 'Ralph, I hear you have one hell of an exclusive.' I say, 'Yeah, I think I do.' And he says, 'Well, we're not going to run it.' I was stunned! Turns out Einstein's son, Hans, called while I was on the road, and asked that we not run the story, that we respect the family's privacy while they're still mourning. So Ed decided to kill the story. You can't run a a magazine without an editor to make those decisions, and Ed had made his. Like I said, we all trusted him, so I said, 'Well, that's that,' and went on to whatever my next assignment was. I figured the pictures would never see the light of day, and as time went by I forgot all about them. But here they are!" LIFE.com is publishing these images now, as none of Einstein's children or step-children are alive, and his last known biological grandchild died in 2008. (He does have living great-grandchildren.) There is no longer any reason to keep these pictures, and their story, in the dark. 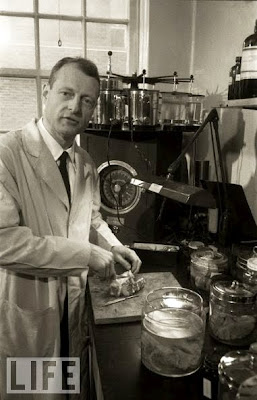 Dr. Thomas Harvey (1912 - 2007) was the pathologist who conducted the autopsy on Einstein at Princeton Hospital in 1955. The stranger-than-fiction tale of Einstein's brain -- which Harvey controversially removed during the autopsy, carefully sliced into sections, and then kept for years for research purposes -- and the intrigues long-associated with the famous organ, are far too convoluted to go into here. However: on the day that Einstein died, Ralph Morse was able to take a few quick photographs of Dr. Harvey at the hospital. Morse says he's certain that that is not Einstein's brain under Dr. Harvey's knife in this never-before-seen picture. Then, after a pause, Morse qualifies that certainty: "You know, it was fifty-five years ago. Honestly, I don't remember every single detail of the day. So whatever he's cutting there ..." Morse's words hang in the air. Then, mischievously, he laughs.

Albert Einstein [Wikipedia]
Posted by Mercury at 5:59 AM