Noah's Ark...back in the news again 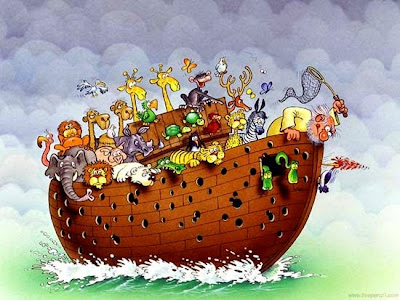 And another quest to discover religious artifacts.

"Has Noah's Ark Been Discovered in Turkey?"

Time
To a score of marching drums and pipes, we see the expedition trudge across a snowy expanse and up the mountain. They camp on a hilly bluff, the sun setting over the Anatolian hinterland below. Moments later, we go inside a dark cave and watch members of the expedition inspect what appears to be a solid wooden wall, entombed within layers of glacial ice and volcanic rock. A gnarled beam runs suspended from one part of the cavern to another. There's straw and bits of old rope on the ground; a structure is taking shape. What is it? According to the explorers, it's Noah's Ark, literally frozen in time.

This is the footage of the alleged discovery of the biblical vessel, perched more than 12,000 ft (4,000 m) high on Mount Ararat in eastern Turkey, that was first shown to journalists on April 25 at a press conference in a fancy boutique hotel in Hong Kong. On hand were members of the team, composed largely of Hong Kong–based Evangelicals, an art historian and a handful of Turkish academics and government officials. They displayed specimens of objects recovered from the supposed ark, which they say they encountered in seven dismembered compartments within the mountain: on show are pieces of petrified wood allegedly carbon-dated at 4,800 years old, a chunk of crystal and a cluster of seed-like pellets. "There is a tremendous amount of evidence that this structure is the ark of Noah," said Gerrit Aalten, a Dutch researcher of ark lore who was enlisted to evaluate the team's findings.

Reported sightings of the ark are almost as old as the biblical story itself. In the Book of Genesis, God set about annihilating a "corrupt" and "violent" world once Noah, whom he seemed to like, built a wooden vessel to hold his family and two of "all living creatures, from all flesh." As the floodwaters abated, the barque came to rest by "the mountains of Ararat." Since then, ancient Roman scholars, medieval travelers and Ottoman soldiers have all supposedly spotted this mythical ship amid the region's peaks. So too have a host of Christian explorers — most recently in 2006, when a Colorado-based Evangelical and amateur archaeologist claimed to have uncovered the ark, petrified within Iran's Alborz mountain range along the Turkish border. Upon examination of the find, geologists declared it to be just an oddly shaped variety of rock.

The Hong Kong team says it has been far more thorough. Their trip, heralded at the press conference as a "99.9%" success, took place last October. In the intervening months, says Yeung Wing-Cheung, one of the group's leaders, they have verified their findings with the insight of a few Turkish archaeologists and geologists. While they have only released a brief, edited video of their trek and discovery to the public, Yeung says they have shown full footage of the ascent to colleagues in the cult field of Arkeology. (They justify their secrecy by saying it's for the integrity of the site, which the local government in the area now intends to prepare as a tourist destination.)

The team has conducted missions to Mount Ararat since 2003 under the auspices of a Hong Kong–based organization dubbed Noah's Ark Ministries International, which is in turn linked with another well-funded Christian group in the city called Media Evangelism. The latter drew attention in 2008 when it helped set up a park that now houses a life-size replica of the ark, accompanied by models of animals on board as well as a vivid film depicting God's wrath at a sinful mankind and the flood he sent to wash it away. Yeung talks of the ark's discovery in almost apocalyptic terms: "At this day, at this moment, it has a very special meaning when we see so many natural disasters and earthquakes," he tells TIME. "People should come and see the ark and think about their place in the world."

Not surprisingly, there are skeptics. Eric Cline, a prominent biblical archaeologist at George Washington University and author of the best-selling From Eden to Exile: Unraveling Mysteries of the Bible, questions why this group made up mostly of amateurs in the field chose to announce their findings at a press conference rather than have them peer-reviewed and then published in a scholarly journal, as is standard archaeological and scientific practice. "You see these sorts of claims almost every other year," he says. "When people of faith go out looking for things, it seems they almost always find them."

Archaeologists on blogs and forums have suggested the structure up on Mount Ararat may well just be a hut or some other form of rudimentary shelter. Cline also wonders why the ark over time would have been left intact at all. Indeed, according to the 1st century A.D. Jewish-Roman historian Flavius Josephus, the ship was already being torn down. "It is said," he wrote, "that a portion of the vessel still survives ... on the mountains ... and that persons carry off pieces of [it], which they use as talismans."

Nevertheless, Yeung and his colleagues are pressing ahead, hoping to gain the support of UNESCO and spend the next few years deepening their analysis of the site. Cline says this sort of work strays from the real purpose of biblical archaeology, which is to bring to light the greater social realities of that ancient time, rather than prove the truth of Christian doctrine with quests for biblical totems.

It also misses a larger point about the history of the myth. The flood has echoes in legends from Central America to South Asia, and it almost certainly predates Judeo-Christian times. Scholars believe it was most likely transmitted to the Israelites from Mesopotamia: in the far older Epic of Gilgamesh, we encounter Utnapishtim, a man chosen by the gods to live alone in a boat full of animals while the world around him ended in a deluge. Just like Noah, as the rains stopped he sent out both a dove and a raven to gauge whether the waters had receded. "That's why I tell my students," says Cline, "that if I am going to look for an ark, it won't be that of Noah. Maybe it would be Utnapishtim's."
Posted by Mercury at 5:58 AM