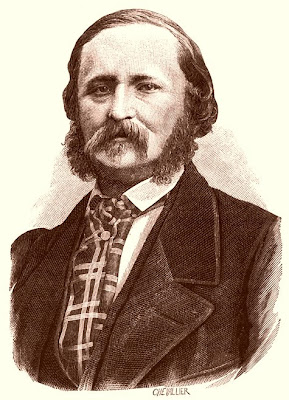 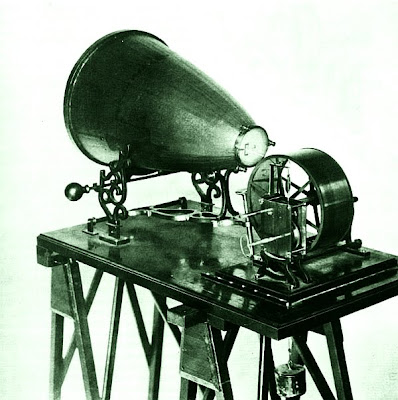 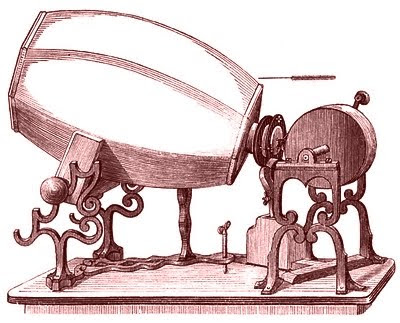 Wired
1860: Seventeen years before Thomas Edison records what was previously thought to have been the first sound ever captured in a fixed medium, Parisian typesetter and inventor Édouard-Léon Scott de Martinville’s phonautograph records sound visually onto paper.

Neither Scott nor any of his contemporaries devised a way to turn these visual phonautogram recordings back into sound, and they lay silent for a century-and-a-half.

The phonautograph was a complicated, rudimentary, completely mechanical apparatus. It contained all of the basic principles of modern recording, just without electricity.

A thin membrane on one end of a plaster-of-paris barrel vibrated a stylus. The stylus pressed against sheets of paper that had been blackened by oil-lamp smoke and attached to a rotating cylinder. The sound waves thus left a mark on on the rotating black paper.

Scott had indeed recorded sound. He just didn’t have any means to play it back. He viewed his recording as an automatic dictation device whose patterns people would eventually be able to read with their eyes. It would be 1877 before Thomas Edison made and played back his famous recording of “Mary Had a Little Lamb,” thus successfully reproducing sound.

A group of American audio historians discovered a Scott phonoautogram in a Paris archive in 2008. Researchers at Lawrence Berkeley National Laboratory directed an optical “virtual stylus” at high-resolution scans of the sooty original recording to re-create the sound.

They were able to listen to the ghostly echo of music recorded April 9, 1860: a scratchy 10-second snippet of the folk song, “Au Clair de la Lune.”

Samuel Brylawski, former head of the recorded-sound division of the Library of Congress, called the phonoautogram “a historic find — the earliest known recording of sound.”

Its sound is muffled enough to be considerably less legible than the visage in the Shroud of Turin. What’s especially interesting is the nature of the noise that muddies the original signal. It sounds very much like the static that results from wind rushing against a microphone — even though the process of converting the phonautogram from, as the paper describes it, “squiggles on paper to sound” was done without any actual acoustic machinery. Scientists at the Lawrence Berkeley National Laboratory in Berkeley used visual scanning equipment to achieve the results.

And, the New York Times offered this article...

The New York Times
For more than a century, since he captured the spoken words “Mary had a little lamb” on a sheet of tinfoil, Thomas Edison has been considered the father of recorded sound. But researchers say they have unearthed a recording of the human voice, made by a little-known Frenchman, that predates Edison’s invention of the phonograph by nearly two decades.

The 10-second recording of a singer crooning the folk song “Au Clair de la Lune” was discovered earlier this month in an archive in Paris by a group of American audio historians. It was made, the researchers say, on April 9, 1860, on a phonautograph, a machine designed to record sounds visually, not to play them back. But the phonautograph recording, or phonautogram, was made playable — converted from squiggles on paper to sound — by scientists at the Lawrence Berkeley National Laboratory in Berkeley, Calif.

“This is a historic find, the earliest known recording of sound,” said Samuel Brylawski, the former head of the recorded-sound division of the Library of Congress, who is not affiliated with the research group but who was familiar with its findings. The audio excavation could give a new primacy to the phonautograph, once considered a curio, and its inventor, Édouard-Léon Scott de Martinville, a Parisian typesetter and tinkerer who went to his grave convinced that credit for his breakthroughs had been improperly bestowed on Edison.

Scott’s device had a barrel-shaped horn attached to a stylus, which etched sound waves onto sheets of paper blackened by smoke from an oil lamp. The recordings were not intended for listening; the idea of audio playback had not been conceived. Rather, Scott sought to create a paper record of human speech that could later be deciphered.

But the Lawrence Berkeley scientists used optical imaging and a “virtual stylus” on high-resolution scans of the phonautogram, deploying modern technology to extract sound from patterns inscribed on the soot-blackened paper almost a century and a half ago. The scientists belong to an informal collaborative called First Sounds that also includes audio historians and sound engineers.

David Giovannoni, an American audio historian who led the research effort, will present the findings and play the recording in public on Friday at the annual conference of the Association for Recorded Sound Collections at Stanford University in Palo Alto, Calif.

Scott’s 1860 phonautogram was made 17 years before Edison received a patent for the phonograph and 28 years before an Edison associate captured a snippet of a Handel oratorio on a wax cylinder, a recording that until now was widely regarded by experts as the oldest that could be played back.

Mr. Giovannoni’s presentation on Friday will showcase additional Scott phonautograms discovered in Paris, including recordings made in 1853 and 1854. Those first experiments included attempts to capture the sounds of a human voice and a guitar, but Scott’s machine was at that time imperfectly calibrated.

“We got the early phonautograms to squawk, that’s about it,” Mr. Giovannoni said.

But the April 1860 phonautogram is more than a squawk. On a digital copy of the recording provided to The New York Times, the anonymous vocalist, probably female, can be heard against a hissing, crackling background din. The voice, muffled but audible, sings, “Au clair de la lune, Pierrot répondit” in a lilting 11-note melody — a ghostly tune, drifting out of the sonic murk.

The hunt for this audio holy grail was begun in the fall by Mr. Giovannoni and three associates: Patrick Feaster, an expert in the history of the phonograph who teaches at Indiana University, and Richard Martin and Meagan Hennessey, owners of Archeophone Records, a label specializing in early sound recordings. They had collaborated on the Archeophone album “Actionable Offenses,” a collection of obscene 19th-century records that received two Grammy nominations. When Mr. Giovannoni raised the possibility of compiling an anthology of the world’s oldest recorded sounds, Mr. Feaster suggested they go digging for Scott’s phonautograms.

Historians have long been aware of Scott’s work. But the American researchers believe they are the first to make a concerted search for Scott’s phonautograms or attempt to play them back.

In December Mr. Giovannoni and a research assistant traveled to a patent office in Paris, the Institut National de la Propriété Industrielle. There he found recordings from 1857 and 1859 that were included by Scott in his phonautograph patent application. Mr. Giovannoni said that he worked with the archive staff there to make high-resolution, preservation-grade digital scans of these recordings.

A trail of clues, including a cryptic reference in Scott’s writings to phonautogram deposits made at “the Academy,” led the researchers to another Paris institution, the French Academy of Sciences, where several more of Scott’s recordings were stored. Mr. Giovannoni said that his eureka moment came when he laid eyes on the April 1860 phonautogram, an immaculately preserved sheet of rag paper 9 inches by 25 inches.

“It was pristine,” Mr. Giovannoni said. “The sound waves were remarkably clear and clean.”

His scans were sent to the Lawrence Berkeley lab, where they were converted into sound by the scientists Carl Haber and Earl Cornell. They used a technology developed several years ago in collaboration with the Library of Congress, in which high-resolution “maps” of grooved records are played on a computer using a digital stylus. The 1860 phonautogram was separated into 16 tracks, which Mr. Giovannoni, Mr. Feaster and Mr. Martin meticulously stitched back together, making adjustments for variations in the speed of Scott’s hand-cranked recording.

Listeners are now left to ponder the oddity of hearing a recording made before the idea of audio playback was even imagined.

“There is a yawning epistemic gap between us and Léon Scott, because he thought that the way one gets to the truth of sound is by looking at it,” said Jonathan Sterne, a professor at McGill University in Montreal and the author of “The Audible Past: Cultural Origins of Sound Reproduction.”

Scott is in many ways an unlikely hero of recorded sound. Born in Paris in 1817, he was a man of letters, not a scientist, who worked in the printing trade and as a librarian. He published a book on the history of shorthand, and evidently viewed sound recording as an extension of stenography. In a self-published memoir in 1878, he railed against Edison for “appropriating” his methods and misconstruing the purpose of recording technology. The goal, Scott argued, was not sound reproduction, but “writing speech, which is what the word phonograph means.”

In fact, Edison arrived at his advances on his own. There is no evidence that Edison drew on knowledge of Scott’s work to create his phonograph, and he retains the distinction of being the first to reproduce sound.

“Edison is not diminished whatsoever by this discovery,” Mr. Giovannoni said.

Paul Israel, director of the Thomas A. Edison Papers at Rutgers University in Piscataway, N.J., praised the discovery as a “tremendous achievement,” but called Edison’s phonograph a more significant technological feat.

“What made Edison different from Scott was that he was trying to reproduce sound and he succeeded,” Mr. Israel said.

But history is finally catching up with Scott.

Mr. Sterne, the McGill professor, said: “We are in a period that is more similar to the 1860s than the 1880s. With computers, there is an unprecedented visualization of sound.”

The acclaim Scott sought may turn out to have been assured by the very sonic reproduction he disdained. And it took a group of American researchers to rescue Scott’s work from the musty vaults of his home city. In his memoir, Scott scorned his American rival Edison and made brazen appeals to French nationalism. “What are the rights of the discoverer versus the improver?” he wrote less than a year before his death in 1879. “Come, Parisians, don’t let them take our prize.”
Posted by Mercury at 8:24 AM