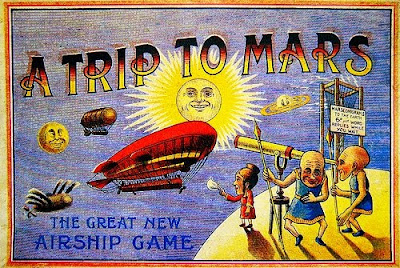 Overall the new science budget philosophy of Obama's is sound and realistic but this nonsense of going to Mars [in his lifetime] is shallow and unrealistic...unless he lives another 500 years.

Associated Press
President Barack Obama boldly predicted Thursday his new plans for space exploration would lead American astronauts on historic, almost fantastic journeys to an asteroid and then to Mars -- and in his lifetime -- relying on rockets and propulsion still to be imagined and built.

''I expect to be around to see it,'' he said of pioneering U.S. trips starting with a landing on an asteroid -- a colossal feat in itself -- before the long-dreamed-of expedition to Mars. He spoke near the historic Kennedy Space Center launch pads that sent the first men to the moon, a blunt rejoinder to critics, including several former astronauts, who contend his planned changes will instead deal a staggering blow to the nation's manned space program.

''We want to leap into the future,'' not continue on the same path as before, Obama said as he sought to reassure NASA workers that America's space adventures would soar on despite the impending termination of space shuttle flights.

His prediction was reminiscent of President John F. Kennedy's declaration in 1961, ''I believe that this nation should commit itself to achieving the goal, before this decade is out, of landing a man on the Moon and returning him safely to Earth.'' That goal was fulfilled in 1969.

Obama did not predict a Mars landing soon. But he said that by 2025, the nation would have a new spacecraft ''designed for long journeys to allow us to begin the first-ever crewed missions beyond the moon into deep space.''

''We'll start by sending astronauts to an asteroid for the first time in history,'' he said. ''By the mid-2030s, I believe we can send humans to orbit Mars and return them safely to Earth. And a landing on Mars will follow. And I expect to be around to see it.''

The biggest criticisms of Obama's plans have been that they have lacked details and goals. Thursday's speech was an attempt to answer, especially since an asteroid is the next step away from Earth's reach.

Asteroids zip by Earth fairly often and have occasionally smacked the planet with disastrous results. For example, asteroids have been blamed for the extinction of the dinosaurs.

Landing on an asteroid would give scientists a better idea of how to handle a future killer asteroid that could wipe out much of life on Earth. Also, it would be a feat sure to win great attention -- and there is far less gravity than the moon, meaning it would be easier and cheaper to leave.

''I think he said all the right things'' in declaring a commitment to space exploration, said George Washington University space scholar John Logsdon, who has served on several NASA advisory boards. ''I don't know what more you could have asked for.''

''The president's new plans for NASA are flat-out irresponsible,'' Vitter said. ''He has evidently decided ... that it's time for us to simply walk away from manned space exploration for the foreseeable future, with no clear timeline for returning or for achieving any of our goals for deep space exploration.''

Obama said he was ''100 percent committed to the mission of NASA and its future.'' He outlined plans for federal spending to bring more private companies into space exploration following the soon-to-end space shuttle program.

He acknowledged criticism for his drastic changes to the space agency's direction. But, he said, ''The bottom line is: Nobody is more committed to manned space flight, the human exploration of space, than I am. But we've got to do it in a smart way; we can't keep doing the same old things as before.''

Obama said the space program is not a luxury but a necessity for the United States.

He noted that the Kennedy Space Center has inspired the nation and the world for half a century. He said NASA represents what it means to be American -- ''reaching for new heights and reaching for what's possible'' -- and is not close to its final days.

Obama sought to explain why he aborted President George W. Bush's return-to-the moon plan in favor of a complicated system of public-and-private flights that would go elsewhere in space, with details still to be worked out.

''We've been there before,'' Obama said of the nation's moon landings decades ago. ''There's a lot more of space to explore.''

He said his administration would support continued manned exploration of space ''not just with dollars, but with clear aims and a larger purpose.''

The Obama space plan relies on private companies to fly to the space station, giving them almost $6 billion to build their own rockets and ships. It also extends the space station's life by five years and puts billions into research to eventually develop new government rocket ships for future missions to a nearby asteroid, to the moon, to Martian moons or other points in space. Those stops would be stepping stones on an eventual mission to Mars itself.

Addressing concerns of job losses to space program workers, particularly in Florida, Obama said that ''despite some reports to the contrary,'' his plan would add more than 2,500 jobs to the Cape Canaveral region over the next two years than would the plan worked out by his predecessor.

''We'll modernize the Kennedy Space Center, creating jobs as we upgrade launch facilities. And there is potential for even more job creation as companies in Florida and across America compete to be part of a new space transportation industry.

''This holds the promise of generating more than 10,000 jobs nationwide over the next few years. Many of these jobs will be created in Florida, an area primed to lead in this competition,'' he said.

Among his most vocal critics has been Neil Armstrong, the first man to walk on the moon. Obama did not mention Armstrong, who did not attend the speech, but he did praise Buzz Aldrin, one of Armstrong's Apollo 11 crewmates.

Aldrin did attend the speech -- flying in with Obama on Air Force One.

Obama also said his administration would rescue a small part of the moon program: its Orion crew capsule.

But instead of taking four astronauts to the moon, the not-yet-built Orion will be slimmed down and used as an emergency escape pod for the space station.

Obama spoke in the vast launch complex's Operations and Checkout building -- the place where Orion is scheduled to be eventually prepared for launch.

The president said, ''This Orion effort will be part of the technological foundation for advanced spacecraft to be used in future deep space missions. In fact, Orion will be readied for flight right here in this room.''