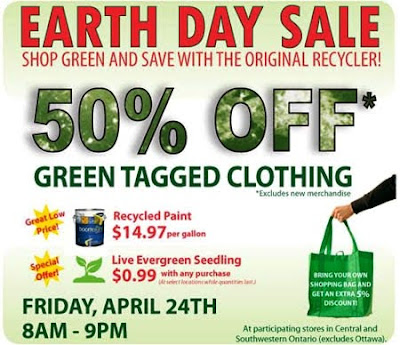 The New York Times
So strong was the antibusiness sentiment for the first Earth Day in 1970 that organizers took no money from corporations and held teach-ins “to challenge corporate and government leaders.”

Forty years later, the day has turned into a premier marketing platform for selling a variety of goods and services, like office products, Greek yogurt and eco-dentistry.

For this year’s celebration, Bahama Umbrella is advertising a specially designed umbrella, with a drain so that water “can be stored, reused and recycled.” Gray Line, a New York City sightseeing company, will keep running its buses on fossil fuels, but it is promoting an “Earth Week” package of day trips to green spots like the botanical gardens and flower shopping at Chelsea Market.

F. A. O. Schwarz is taking advantage of Earth Day to showcase Peat the Penguin, an emerald-tinted plush toy that, as part of the Greenzys line, is made of soy fibers and teaches green lessons to children. The penguin, Greenzys promotional material notes, “is an ardent supporter of recycling, reusing and reducing waste.”

To many pioneers of the environmental movement, eco-consumerism, creeping for decades, is intensely frustrating and detracts from Earth Day’s original purpose.

“This ridiculous perverted marketing has cheapened the concept of what is really green,” said Denis Hayes, who was national coordinator of the first Earth Day and is returning to organize this year’s activities in Washington. “It is tragic.”

Yet the eagerness of corporations to sign up for Earth Day also reflects the environmental movement’s increased tolerance toward corporate America: Many “big greens,” as leading environmental advocacy organizations are known, now accept that they must take money from corporations or at the least become partners with them if they are to make real inroads in changing social behavior.

This year, in an updated version of a teach-in, Greenpeace will team up with technology giants like Cisco and Google to hold a Web seminar focused on how the use of new technologies like videoconferencing and “cloud” computing can reduce the nation’s carbon footprint. Daniel Kessler, a spokesman for Greenpeace, said it was necessary to “promote a counterweight to the fossil fuel industry.”

In 1970, Mayor John V. Lindsay of New York addressed a crowd of tens of thousands in Union Square on Earth Day, in an atmosphere The New York Times likened to a “secular revival meeting.”

This year, Mayor Michael R. Bloomberg will be in Times Square to announce measures to reduce New York’s impact on the environment. Using the same stage, Keep America Beautiful, an antilittering nonprofit organization, will introduce “dream machines,” recycling kiosks it is introducing with PepsiCo. The machines are meant to increase the recycling rates for beverage containers, which is estimated at about 36 percent nationwide.

Of course, a fair portion of the more than 200 billion beverage containers produced in the United States each year are filled with PepsiCo products like Mountain Dew and Aquafina; such bottle trash contributes to serious pollution on beaches, oceans and inland waterways.

Still, Matthew M. McKenna, president and chief executive of Keep America Beautiful, and a former PepsiCo senior vice president, said he jumped at the opportunity to have his former employer introduce its new kiosk at the event.

“We are not being asked to encourage the purchase of Pepsi or the consumption of their products,” he said. “We are asked to deal in the field with what happens when they get thrown out.”

While the momentum for the first Earth Day came from the grass roots, many corporations say that it is often the business community that now leads the way in environmental innovation — and they want to get their customers interested. In an era when the population is more divided on the importance of environmental issues than it was four decades ago, the April event offers a rare window, they say, when customers are game to learn about the environmentally friendly changes the companies have made.

Frank Sherman, United States green officer for TD Bank, said the company hurried to get its prototype of a highly energy-efficient bank branch building in Queens ready for Earth Day because that’s when “people are paying attention.”

The original Earth Day events were attended by 20 million Americans — to this day among the largest participation in a political action in the nation’s history.

This year, while the day will be widely marked with events, including a climate rally on the Mall in Washington, the movement does not have the same support it had four decades ago.

In part, said Robert Stone, a independent documentary filmmaker whose history of the American environmental movement is being broadcast on public television this week, the movement has been a victim of its own success in clearing up tangible problems with air and water. But that is just part of the problem, he noted.