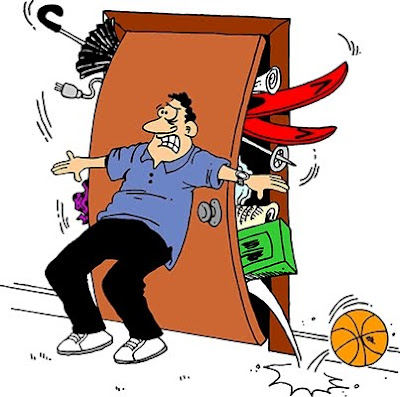 I guess there is a fine line between "hoarding" and "collecting".

"Hoarding: How Collecting Stuff Can Destroy Your Life"

Time
Most of us enjoy our stuff. A new car, designer handbag, or gadget can simplify our lives and bring us status pleasure. Then there are the hoarders, those compelled by an obsession to collect and store things — even that which most of us would consider junk, such as scraps of paper, leaky buckets, and old newspapers. Homes become almost uninhabitable. Narrow pathways referred to as "goat trails" wind through piles of stuff and stacks of things cover sofas and beds, rendering the furniture useless. There are between 6 and 15 million hoarders living in the U.S., and some 75 cities now have task forces dedicated specifically toward working with hoarders in their community.

In their new book Stuff: Compulsive Hoarding and the Meaning of Things Randy Frost, a psychology professor at Smith College and co-author Gail Steketee, dean at Boston University's School of Social Work, debunk the myths behind the phenomenon. Frost spoke to TIME about the sometimes dangerous power of possessions.

In Stuff, you say that self-storage facility rentals are way up and that the average home size has increased 60 percent. Is the U.S. at risk of becoming a nation of hoarders?

All of us have special relationship with things and that relationship is in some ways magical. We get carried away with those attachments and — while that could get more of us into trouble with our possessions — most of us are able to decide when an object begins to interfere with our life. We do something about it at that point. That's the thing that's so troublesome for people who hoard: when the object begins to interfere, they simply put up with it rather than deal with the item.

So they don't realize that their possessions have this powerful effect over them?

We haven't seen too many people who have absolutely no insight. When it comes down to it, in a certain context, they are able to say, 'I've got a problem.' But when they are talking to someone who is trying to get them to throw things away, it's very difficult to say, 'Yeah, I should throw this stuff away.' If they pick up something and someone asks the question, 'Will you throw this away?' all the attachments to that thing overwhelm any thoughts of being without it.

You talk about treatment where you go into people's homes and help them sort through their stuff in order to get their lives back. They learn how to distinguish between what items are meant to be saved and what can be tossed. Are those who make it through the treatment able to stay clutter-free?

It's a struggle. When I asked one woman if I could describe her as a former hoarder — because she has been living pretty much clutter-free for the past six or seven years — she said no. She gave a little anecdote about her thoughts about throwing away a yogurt cup. It was [still] excruciating for her. Part of her phenomena is a tendency to anthropomorphize things and give them feelings. She felt so badly for this cup that she was throwing away. That it was the one that got rejected. That it had to go into this bin and maybe it would be humid and uncomfortable.

What do you think people might be surprised to learn about hoarders?

There are some myths out there about hoarding — that these people are just lazy or messy — and it's really much different than that. It's layered and it's complex. It covers not only attachments to possessions, but the ability to process information in a way that's efficient. You talk to many people with hoarding problems and they'll say, 'I don't really have a hoarding problem, it's just that I don't have enough time to get rid of this stuff.' In fact what's happening, because of the way they process information, is that it takes them so much time to decide to throw something out that they can't keep up with the in-flow.

Do you ever get frustrated and just want to say, 'Oh, just throw it out already'?

I think the thing that sort of captured me and allowed me to do it was just the fascination with the nature of the attachment to the thing: What it is that causes this person to be so attached to this thing? How do they think about this thing? How is that process different from the the process the rest of us go through? It's that curiosity, I think, that keeps me from being impatient with these folks. It's very important to avoid that impatience because that's what these folks have gotten all their lives.

What is the most dramatic incident you've witnessed?

The first time I met Ralph from Stuff we were going through the house [and] his description of the clean out (when his possessions were forcibly removed from his home) that had happened to him was so vivid. And this was something that had happened three years before. The pain in his eyes struck me. He walked me throughout the house, as much as it could be walked through, and pointed out things that were no longer there. These rooms are full of things and he's talking about things that aren't there. One was a name plate off a door that he had taken it down to repair, he described it and then looked at me and literally shouted "GONE!" That sticks in my mind as such a profound experience of just how deeply this had hurt him, getting rid of all that stuff.

Do you often encounter the far extreme of hoarding, like where people actually keep everything?

Yes, we do. In fact, in one of the first groups we ran there was a woman who saved used sanitary napkins and her argument was that she was going to dry them out and use them again. We also had another person who saved everything — parts of her body, everything that came into her house. She had used band aids stuck on the bathroom wall. The first time I was there she worked on at least trying to take them off the bathroom wall and it was just excruciating for her. She was crying and just in horrible pain pulling these band aids off the wall and putting them into a box. The hair that was collected in the bathtub was equally difficult for her to get rid of.

Why do you think that we are so intrigued by this? The A&E show, Hoarders is quite popular, as is TLC's Buried Alive. What is it that makes us want to know about these people?

Part of it is voyeurism. How many chances do we get to really see inside someone's else's life? It is so dramatic to look at someone's home, see it this way, and then imagine how in the world someone could live there. How could they navigate through the rooms? What does this person have to do to get from the dining room to the kitchen? 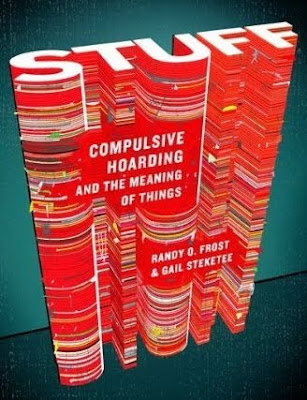 Stuff: Compulsive Hoarding and the Meaning of Things

i know one....about to move into one....and i am just the guy who can make decisions on what has to go...i helped God in the beginning...