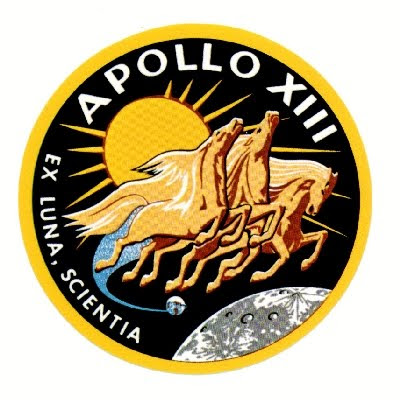 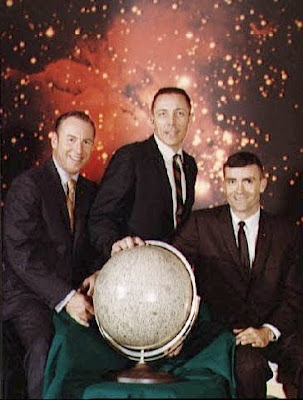 The flight was commanded by James A. Lovell, with John L. "Jack" Swigert command module pilot, and Fred W. Haise lunar module pilot.
"Apollo 13 at 40: Houston, We Have a Miracle"

Time
Say this about the flight of Apollo 13: The spashdown, which occurred 40 years ago today, was perfect. That's not just because the crew actually managed a splashdown, as opposed to bouncing off the atmosphere or burning up on reentry. It's because the maneuver was executed so deftly. The conical Apollo command modules were deliberately hung crookedly from their parachutes so that the ship wouldn't slap into on the water on its blunt bottom, but would instead knife into it. That didn't always happen, since the craft could still catch a nasty wave as it hit. But Apollo 13 caught no wave and slipped into the ocean with almost balletic ease — the only thing about the mission that went just right.

Four decades later, it's easy to forget just how improbable that safe return was, following an oxygen tank explosion that forced the crew to take refuge in the lunar module. There's a reason that during training the astronauts never simulated that kind of emergency — because everyone knew that if an explosion wrecked your ship and all your power and oxygen vanished, you'd surely wind up dead. It's a little like taking a driving course and practicing what to do if your car hurtles off a cliff. What's the point?

But Apollo 13's astronauts did survive. Part of that — a great deal of that — was due to the extraordinary technological and navigational improvisations the people on the ground and in the spacecraft dreamed up along the way. But the rest was due to the surreal cool of two men: commander Jim Lovell and flight director Gene Kranz.

One of the more poignant moments in the Apollo 13 film, which was based on the book of the same name Jim and I wrote, occurs when lunar module pilot Fred Haise is suffering from fever and chills and Jim gives him a bear hug to share his body heat. It was deep in the midst of writing the book, during one of the many, many interview sessions we had, that Jim at last offered up that detail. "Now?" I wanted to ask. "It took you till now to recall that exquisite bit?" I did not say that, of course, because I actually wasn't surprised that he never made mention of it before. Test pilots don't hug, they fly things. And if necessary, they die in the process.

The moment in the mission Jim much prefers to recall — and the only one about which I have ever seen him yield to unalloyed pride — was when he first tried to maneuver the intact lunar module (LEM), which was attached to the carcass of the command module and was now serving as a sort of lifeboat. The LEM was meant to be piloted only after the two spacecraft were separated, and the dramatic shift in center of gravity when the ships were linked made the control stick work in precisely the opposite way it was supposed to: try to yaw left and you go right; try to pitch up and you pitch down. Imagine driving down a highway at 5,000 miles per hour and all of a sudden your steering wheel switches its left-and-right capabilities. "I had to learn to fly all over again," Lovell says, in what passes for boasting when boasting is not something you do.

Kranz, a buzz-cut ex-fighter pilot who would crank himself up for a challenging day at work by playing "Stars and Stripes Forever" in his head, was the unchallenged field general in Mission Control, rarely questioned even by his superiors. During our first meeting I asked him how he — who knew the odds Apollo 13 was facing better than the crew themselves — dealt with the near statistical certainty that the men weren't coming home. His answer was that he didn't need to deal with it.

"I couldn't say when the astronauts would get back or how much spacecraft we'd have left when they did," he said. "But I never questioned that they'd survive." To me, that never seemed like denial that a bad thing was going to happen, but an exertion of pure, clean will to ensure that it didn't.

Kranz and Lovell and the rest of the Apollo vets are, of course, also plainly, fallibly mortal — a fact betrayed not least by the fact that they're also now old. Lovell spent the millennium new year as part of a group camping out on the ice at the South Pole, fighting a wind storm that was threatening to blow his tent away.

Kranz will be 77 this year, and still has the crewcut, the snapping speech cadences and the aggressive optimism he had when he was sending men to the moon. Yet now and then, he too allows a glimpse of something else. In the mid-1990s, when the 25th anniversary of Apollo 13 was approaching, PBS aired what was perhaps the finest documentary ever produced about the mission. Many of the veterans were rounded up and interviewed, but it was Kranz whose on-camera reminiscences ended the show. He was seated in the very control room from which the moon landings were run, recalling the moment Apollo 13 spashed down — the cheering, the backslaps, the cigars, the small American flags being waved at the consoles. And then, improbably, he choked up and couldn't go on.

"Neat" is what passes for gushing when gushing is not something you do.