Harriet Quimby...1st American woman to became a licensed pilot & to fly across the English Channel 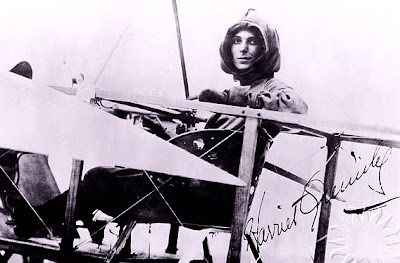 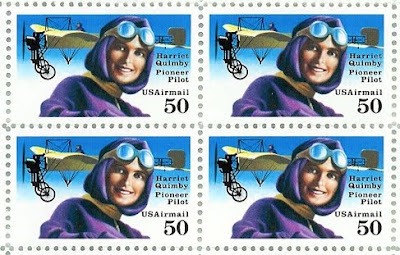 [Click image to read]
Despite a very short career, Harriet Quimby remains one of the most popular pioneer female aviators. Stylish in her purple satin flying suit, Quimby was the first American woman to earn a pilot's license and the first woman to fly solo across the English Channel. Born in Michigan, Quimby and her family moved to California and in 1902 she took a job as a writer for the Dramatic Review in San Francisco. In 1903, she began writing for Leslie's Weekly in New York City. She attended the 1910 Belmont Park Aviation Meet and was so inspired by John Moisant's performance she asked him to teach her to fly. On August 1, 1911, Quimby received her Federation Aeronautique Internationale certificate and immediately joined the Moisant International Aviators, an exhibition team. She traveled with the Moisant group to Mexico and became the first woman to fly over Mexico City. Quimby purchased a Bleriot 50 monoplane in France in March 1912 and began preparations for an English Channel flight. Her advisor, Gustav Hamel, unsure of a woman's ability to make such a flight, offered to disguise himself as Quimby and make the flight for her. She refused and flew from Dover, England, to Hardelot, France (about 25 miles south of Calais) on April 16, 1912. She became an instant sensation and returned triumphantly to the U.S. On July 1, 1912 at the Harvard-Boston Aviation Meet, Quimby was flying in the Bleriot with William Willard. Suddenly the aircraft pitched forward and Willard was thrown from his seat; the aircraft then flipped over, tossing Harriet out too. Both Quimby and Willard fell to their deaths in Dorchester Harbor. Ironically the aircraft glided to a landing with little damage.

Deceased--Elinor Smith
Posted by Mercury at 7:06 AM