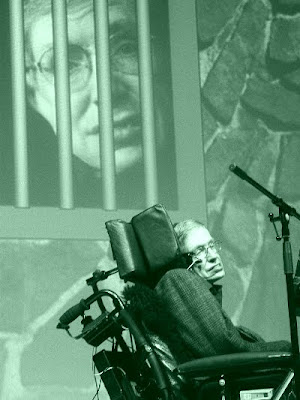 Is this the fate of senior popular scientists...commenting on aliens. Carl Sagan did. Philip Morrison did.

BBC NEWS
Aliens almost certainly exist but humans should make every attempt to avoid them, Stephen Hawking has warned.

In a series for the Discovery Channel the renowned astrophysicist said it was "perfectly rational" to assume intelligent life exists elsewhere.

But he warned that aliens might simply raid Earth for resources, then move on.

"If aliens visit us, the outcome would be much as when Columbus landed in America, which didn't turn out well for the Native Americans," he said.

Mr Hawking thinks that, rather than actively trying to communicate with extra-terrestrials, humans should do everything possible to avoid contact.

He explained: "We only have to look at ourselves to see how intelligent life might develop into something we wouldn't want to meet."

In the past probes have been sent into space with engravings of human on board and diagrams showing the location of our planet.

Radio beams have been fired into space in the hope of reaching alien civilisations.

But Mr Hawking conceded most life elsewhere in the universe is likely to consist of simple microbes.

In the recent BBC series Wonders of the Solar System, Professor Brian Cox, a physicist from the University of Manchester, also suggested life may exist elsewhere within our solar system.

He said organisms could be present under the ice sheet that envelops Europa, one of Jupiter's moons.

Professor Cox added: "Closer to home, the evidence that life could exist on Mars is growing.

"We will only know for sure when the next generation of spacecraft, fine-tuned to search for life, are launched to the moons of Jupiter and the arid plains of Mars in the coming decades."
Posted by Mercury at 5:09 AM