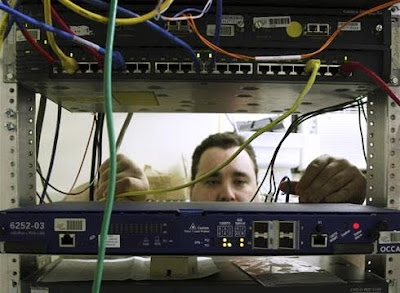 "Our view on 'Net neutrality': Don't let the cable guys decide what you see on Web"

USA TODAY
In China and many other non-democratic countries, the government goes to great lengths to block certain Internet sites that it doesn't want its people seeing.

But in the USA, a long-enduring democracy that respects free expression and free enterprise, the government doesn't decide where you can go on the Internet. Instead, your cable company does that. Or wants to.

That's the upshot of a federal court ruling this week that the Federal Communications Commission (FCC) overreached by sanctioning cable giant Comcast for limiting its customers' ability to share files on a site known as BitTorrent.

The issues are arcane, but the consequences could be felt in family rooms across the USA if not soon corrected. Broadband service providers are poised to become a kind of Internet censor — driven not by political motives but by a desire to maintain their antiquated and anti-competitive business models.

Broadband providers — some, like Comcast, that started as cable companies, and some, like Verizon, that started as phone companies — do have a legitimate interest in keeping the traffic over their networks at a manageable level. That was the reason Comcast cited for limiting BitTorrent, which gobbles up bandwidth as it transmits movies and other video.

The more such content there is, the slower all traffic moves, and video streaming and downloading of all kinds are expanding exponentially. Cable and its customers are particularly vulnerable. Unless capacity expands dramatically, as the Obama administration proposes to do through wireless development, some kind of metered pricing, where bandwidth hogs pay more, might be inevitable and necessary.

But, left to their own devices, some broadband providers will inevitably block or slow down competitors in the name of "managing traffic." Now that they are, at least for the moment, untethered, the pressure to obstruct innovative applications that cut into profits will be overwhelming.

To these providers, innovative applications such as Hulu, a site created by movie and TV studios to distribute video entertainment directly to consumers, are both a threat in the way they eat capacity and a target of opportunity for fattening profits. The same goes for Internet telephony products such as Skype, and a host of other emerging applications that tear down the walls erected by service providers and provide amazing new tools and sources of enjoyment to consumers.

These applications represent capitalism at its best — imaginative growth engines that will help keep America competitive and innovative. They shouldn't be smothered by carriers with conflicts of interest.

In theory, the FCC could solve the problem by admitting that it made a mistake in 2002 when it, in essence, deregulated broadband but then claimed authority to police it. If reclassifying broadband as a telecommunications service worthy of regulation proves problematic, Congress will have to get involved to preserve what's known as "Net neutrality."

Because the last thing consumers need is to have their Web surfing constrained by a bunch of cable guys.


The Internet is being legally squeezed