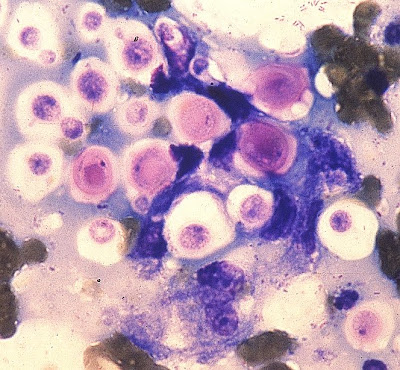 Just great...mankind wiped out, not by war or alien invasion, but by spores.

Reuters
A potentially deadly strain of fungus is spreading among animals and people in the northwestern United States and the Canadian province of British Columbia, researchers reported on Thursday.

The airborne fungus, called Cryptococcus gattii, usually only infects transplant and AIDS patients and people with otherwise compromised immune systems, but the new strain is genetically different, the researchers said.

"This novel fungus is worrisome because it appears to be a threat to otherwise healthy people," said Edmond Byrnes of Duke University in North Carolina, who led the study.

"The findings presented here document that the outbreak of C. gattii in Western North America is continuing to expand throughout this temperate region," the researchers said in their report, published in the Public Library of Science journal PLoS Pathogens here

"Our findings suggest further expansion into neighboring regions is likely to occur and aim to increase disease awareness in the region."

The new strain appears to be unusually deadly, with a mortality rate of about 25 percent among the 21 U.S. cases analyzed, they said.

"From 1999 through 2003, the cases were largely restricted to Vancouver Island," the report reads.

"Between 2003 and 2006, the outbreak expanded into neighboring mainland British Columbia and then into Washington and Oregon from 2005 to 2009. Based on this historical trajectory of expansion, the outbreak may continue to expand into the neighboring region of Northern California, and possibly further."

The spore-forming fungus can cause symptoms in people and animals two weeks or more after exposure. They include a cough that lasts for weeks, sharp chest pain, shortness of breath, headache, fever, nighttime sweats and weight loss.

It has also turned up in cats, dogs, an alpaca and a sheep.

Freezing can kill the fungus and climate change may be helping it spread, the researchers said.

Cryptococcus gattii
Posted by Mercury at 9:33 AM