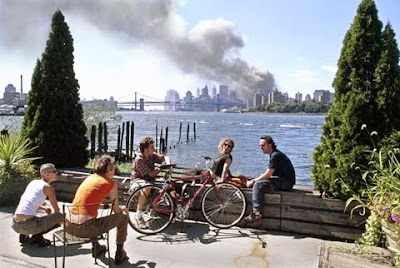 In a way this is a bit senseless.

Reuters
While much of New York has tried to return to normal since September 11, 2001, the search for victims of the World Trade Center attacks goes on every day.

In what some see as necessary and others see as excessive, anthropologists and forensics experts are sifting yet again through rubble for remnants of the nearly 3,000 people killed when two hijacked jetliners crashed into the twin towers.

With buildings slowly being erected where the towers stood, the latest effort to comb through 844 cubic yards of debris collected since 2007 from excavation of new sections of Ground Zero was launched this month.

Scientists have sifted through two batches of debris already and are testing those samples for human DNA. The new batch of debris has been dug up as construction progresses.

For some victims' families, finding a physical trace of the dead is vitally significant.

"We have an obligation to those who are lost and those who they left to do everything in our power to recover them", said Deputy Mayor for Operations Edward Skyler. "And the sadness of the fact that we're still looking over eight years after the tragedy is lost on no one."

This sifting operation will cost some $2 million, he said.

Some see the process as having dragged on too long.

"Another sifting of the remains is cruel and inhumane," said Talat Hamdani. Her son, a police cadet, died on September 11.

"Sifting the remains will not provide the victims' families closure. On the contrary, it will only cause more pain by reopening their wound and it will inject a feeling of revenge once again in the veins of our nation," she said.

In the latest sifting, 25 workers sort recovered rubble stored at the city's Fresh Kills landfill. In a mobile lab, scientists pass the dust, gravel and debris through fine meshed sieves looking for potential remains. Those are tested and cross-referenced with a database of DNA and identification samples of victims to find a possible match.

So far, 50 remains that scientists think may be human but have yet to be tested have been found. The city's medical examiner said the effort is expected to wrap up by early July.

Overall, of the 21,744 remains uncovered in the two other sifting operations, 59 percent have been identified, corresponding to 1,626 of the 2,749 victims.

"People will go to great extremes to find remains so that they can finalize and complete that portion of the grief work," said Diana Nash, a local bereavement counselor.

The loss of a loved one in a sudden catastrophe involves a great deal of uncertainty because physical remains may not be uncovered, said J. Shep Jeffreys, a grief psychologist at Johns Hopkins School of Medicine.

"Looking for some definitive indication of the location of a body or body fragment is supportive in terms of the grieving process. If we don't have it, we have an ambiguous process," he said. "The ambiguity is eating away at the ability to reclaim some post-loss life."

'A LITTLE TOO LATE'

An active proponent of the sifting is Diane Horning, whose son Matthew, a database administrator for an insurance firm, was killed. But she is angry at how long the search is taking.

"It's a little too late, but it's important because we need to respect those who are killed," she said. Instead of proactively searching, the city waited as excavation progressed to uncover remains, she said.

"To have neglected it for so long, despite everybody begging them, shows their great callousness and disrespect for the dead," she said.

Some family members are opting out of the process and have refused to provide DNA samples for potential matches. Still others feel they do not need to find remains of those lost, said Ginny Bauer, whose husband David, a sales director at Canter Fitzgerald, died on September 11.

"My husband and so many other people who perished that day, their remains could be anywhere," she said. "It's not who they are, it doesn't represent them. Their spirit is with us."
Posted by Mercury at 9:22 AM

i agree with Ginny....."My husband and so many other people who perished that day, their remains could be anywhere," she said. "It's not who they are, it doesn't represent them. Their spirit is with us." end the circus.....